UNDOING OBAMA: Trump's use of the Congressional Review Act

The first five months of the Trump administration were marked by a Republican Congress eager to overturn Obama era rules, with environmental regulations as a major target for the repeals.

The Congressional Review Act provides Congress with an expedited process to roll back federal rules. The main requirement? The repeal proposals must be passed by both the House and Senate and signed by the president within 60 legislative days of the regulation first being introduced to Congress.

After only using it once since its creation in 1996, Congress has revived the CRA, wielding it a notable 14 times with President Donald Trump’s support to repeal Obama-era rules.

One of the first regulations to fall was the Stream Protection Rule, which was signed into law as part of an effort to protect U.S. waterways from coal mining runoff by using more up-to-date technology and scientific measures to ensure the coal runoff damage was minimized to the greatest extent possible. It officially went into effect on Jan. 19, 2017.

“Regulations need to keep pace with modern mining practices,” then Interior Secretary Sally Jewell said in a press release when the rule was finalized,. “So we worked closely with many stakeholders to craft a plan that protects water quality, supports economic opportunities, safeguards our environment and makes coalfield communities more resilient for a diversified economic future.”

No time to take effect

But the Stream Protection Rule was rescinded after Rep. Bill Johnson, R-Ohio, introduced the CRA resolution in the House and it quickly went to the Senate. On Feb.16, less than a month after the rule went into effect, Trump signed the repeal.

In a statement, Johnson called the Stream Protection Rule “onerous” and “job-killing” because it would have restricted the coal mining industry and eliminate a number of coal jobs.

The speed with which the Stream Protection Rule was rolled back makes it difficult to quantify the effect the rule might have had on rivers and streams.

“There was no time for the rule to take effect. Implementation at the state level would likely have taken months, if not years,” said Erin Savage, the Central Appalachian program manager at the environmental advocacy group Appalachian Voices, in an email.

“If the SPR had gone into effect, we hopefully would have seen a lot of water quality-related benefits, but it would have depended a lot on state-level enforcement of the rule,” Savage said.

“Some of the more notable benefits would have been better baseline monitoring data before mining began so that it would be easier to determine impacts once mining started. The rule also would have better defined what constitutes damage to a river or stream, which could have helped strengthen enforcement.”

She believes that Appalachia would have benefitted from the Stream Protection Rule, but that the region won’t necessarily be hurt too badly from losing the rule because regulations under the Clean Water Act and the Surface Mining Control and Reclamation Act do provide some protections. 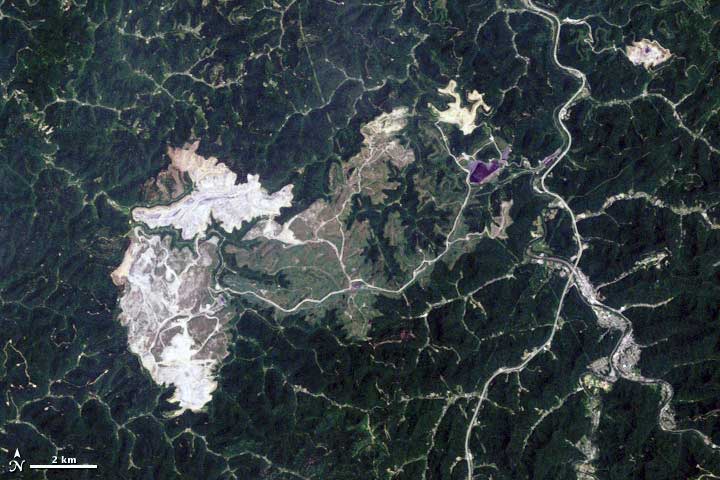 Below the densely forested slopes of southern West Virginia’s Appalachian Mountains is a layer cake of thin coal seams. To uncover this coal profitably, mining companies use strip mining methods. This 2009 image of a surface mine in Boone County, West Virginia, is based on data from NASA’s Landsat 5 satellite. The active mining areas appear off-white.

Another environmental regulation that was repealed was the Department of the Interior rule concerning hunting methods used on national wildlife refuges in Alaska. Under this rule, hunters were barred from using specific predator control methods such as killing wolves and coyotes during denning – or breeding -- season or shooting bears from aircraft.

With the rule now off the books, these controversial hunting practices can be used in the Alaska’s federal refuges.

Alaskan Rep. Don Young, the state’s longest-serving congressman, offered the repeal bill, one of three he proposed. That made him the biggest user of the CRA. However, only the hunting methods rule was rescinded. The other two repeal proposals, also aimed at rescinding environmental regulations in Alaska, never came to a vote in the House.

Even with the elimination of the rule, the U.S. Fish and Wildlife Service is still mandated to conserve species and habitats, and maintain the biological diversity, integrity and environmental health of national wildlife refuges in Alaska.

'Mandated to conserve species and habitats'

Defenders of Wildlife, a conservation nonprofit, has strenuously opposed overturning the hunting restrictions rule. Jenny Keatinge, a federal lands policy analyst for the group, indicated that the group’s advocacy on this issue will not change.

“Even with the elimination of the rule, the U.S. Fish and Wildlife Service is still mandated to conserve species and habitats, and maintain the biological diversity, integrity and environmental health of national wildlife refuges in Alaska,” Keatinge said in an email.

“We believe, properly interpreted and implemented, that federal conservation law should still prevent the state of Alaska from permitting extreme non-subsistence hunting practices that are intended to drive down carnivore populations on refuges as part of a broader predator control program.”

Keatinge said Alaska has not yet moved to use the repeal of the rule to “apply its unscientific predator control policy on these federal public lands since the rule was rescinded. Any such decision-making should require public participation.”

• All CRA actions signed by Trump

Only one other environmental repeal was successful, a resolution introduced by Republican Rep. Liz Cheney of Wyoming. She championed the removal of the Planning 2.0 rule, which gave states more say on how public lands are used.

In addition to the two Don Young repeal resolutions that didn’t get passed, a resolution to repeal a Bureau of Land Management rule also did not make it to the president’s desk; the House approved it, but the Senate did not. It would have rescinded regulations that decrease natural gas waste during oil and gas production.