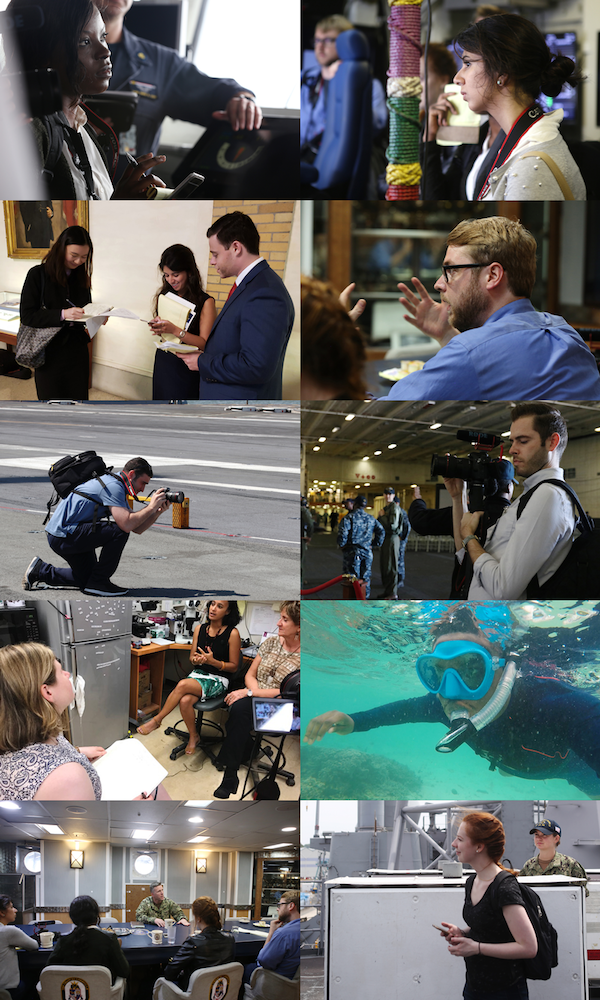 Medill graduate students who took part in this year’s national security project traveled widely throughout the U.S., Asia and the Western Pacific as part of their investigation into Navy readiness in the wake of the USS Fitzgerald and USS John S. McCain disasters last year.

During a two-day trip to Norfolk, Virginia, in early April, four students toured two docked aircraft carriers, the USS George H.W. Bush, a Nimitz-class carrier, and USS Gerald R. Ford, the first of a new class of cutting-edge super carriers. Later that month, three students and an instructor went to Naval Base San Diego before being airlifted to a U.S. aircraft carrier at sea. Once aboard the USS John C. Stennis, the reporters got a first-hand view of naval operations and an opportunity to interview the ship’s captain, executive officer and fighter pilots.

A nearly week-long trip to the U.S. naval base in Yokosuka, Japan – headquarters for the 7th Fleet – was perhaps the most useful to students in gleaning insights into Navy readiness reforms since last year’s collisions. A half dozen students surveyed the heavily damaged McCain destroyer which was undergoing repairs and interviewed a number of Navy officers and enlisted men on a wide range of national security topics.

Meanwhile, two other students flew 7,920 miles from Washington to Guam to report on the impact of climate change on strategically critical naval installations. They returned with insightful interviews with environmentalists and military experts and video of the island’s dying coral reefs and eroding coastal areas.

This project – The Navy’s Wake-Up Call – And How the U.S. is Answering It — was conducted under the auspices of the National Security Journalism Initiative, which is part of Northwestern University’s Medill School of Journalism, Media, Integrated Media Communications.

Medill, long a national leader in journalism education, greatly expanded that leadership role to include national security journalism education with the assistance of generous Robert R. McCormick Foundation grants. As part of this innovation, the school created the NSJ Initiative in January 2009 to provide journalists-in-training with the knowledge and skills needed to report accurately and innovatively on events and issues related to defense, security and civil liberties.

The NSJ initiative’s National Security Reporting Project, launched in 2010, allows a select group of master’s students to spend three months reporting on a topic of national security interest, and present their investigative work across all digital platforms in collaboration with professional media partners.

The first effort in 2011, Global Warning (www.globalwarning.org), was an examination of the national security implications of climate change in partnership with The Washington Post. It was hailed as a prescient look at the threats of global warming and won a prestigious national award from the Online News Association.

Last year, the student journalists produced a detailed analysis from six former Soviet client states now grappling with questions of independence and complex relations with Russia, the European Union, NATO and the United States. The series, Contested Territory: Russia’s Sphere of Influence, Looking East and West, was published online by Newsweek and The Ground Truth Project, partners in the project.

Kate Cimini is a journalist and photographer who received a master’s degree at Medill School of Journalism covering national security, climate, and education. Her work has been published in the Houston Chronicle, Washingtonian, Sports Illustrated, ESPN, and others. You can follow her on Twitter at @k_cimini.

Casey Egan received a master’s degree from Northwestern University’s Medill School of Journalism, where he specialized in politics and national security. He earned a BA from the University of Washington in Political Science and Communication. He has spent the last four years focused on energy and environmental policy.

Yingjie Gu received a master’s degree from the Medill School of Journalism, specializing in politics and national security. She reports on current U.S.-Asian foreign policy issues both in English and Mandarin. Prior to and during her time at Medill, she interned for Chinese Radio Seattle, Sojourners Magazine and CGTN America.

Gerald Harris received a master’s degree from Northwestern University’s Medill School of Journalism. He reported on politics and national security for the Medill News Service. Gerald is joining WJTV in Jackson, Mississippi as a news reporter.

Jasmine Khayami recently received a master’s degree from Northwestern University’s Medill School of Journalism. During her time at Medill, she worked as a politics, business and national security reporter for the Medill News Service. She received her undergraduate degree from Cornell University in 2017, majoring in Industrial and Labor Relations and double minoring in Law & Society and Applied Economic Management. She is excited to move back to Boston, where her family resides, to begin her career following graduation.

Kevin is a multimedia journalist with a master’s degree from Northwestern University’s Medill School in Washington, D.C. He had covered Capitol Hill and the U.S. Armed Forces for the Medill News Service and its media partners with an emphasis on digital storytelling using short- and long-form video, text, audio and graphics.

Elizabeth Strassner received a master’s degree from Northwestern’s Medill School of Journalism, specializing in national security and politics. She is a 2015 graduate of Columbia University, and a lifelong fan of the St. Louis Cardinals. Elizabeth has worked at outlets including Congressional Quarterly and ABC News, and will be attending Harvard Law School this fall.

Ricky Zipp received a Master of Science degree from the Medill School of Journalism. Ricky grew up in Corvallis, Oregon and graduated from Oregon State University. While at Medill, he covered the Pentagon and traveled to Guantanamo Bay for a week with fellow Medill student Oyin Falana to cover the Military Commissions case against accused conspirators of the 9/11 attacks.