The warming waters around Guam are stressing and killing the coral barrier ringing the island. Seen here is Ypao Beach, a popular destination for tourists and locals alike to snorkel the coral reef. (Gerald Harris / Medill)

TAMUNING, Guam — The day before May’s full moon, Vic Sahagon, a former Army infantryman , was hanging out on one of Guam’s postcard-perfect beaches under a raised blue tent, sucking down Budweisers and mustard-covered hot dogs alongside his fishing buddies.

They had been waiting hours in the intense heat to net schools of juvenile rabbitfish with the talayeru, a circular net ringed with weights unique to Guam’s Chamorro culture. The schools of the minnow-sized fish once were often the length and breadth of a bus but now, he lamented, its lunar calendar-tied mating and feeding cycles had shifted and the schools were barely as big as a picnic table.

This tiny Western Pacific island is 7,920 miles from Washington, D.C. but central to U.S. security interests in the region. It is home to two of the nation’s most strategically important military bases — both threatened by climate change.

Climate change has already begun to re-shape the island.

The Environmental Protection Agency warned in an August 2016 report that Guam’s air and ocean are warming, the sea level is rising and the ocean is becoming more acidic. Combined, these changes stress and kill the ring of coral  that protects against storms and coastal erosion.

Furthermore, Guam is beginning to see a reduction in freshwater during the dry season, increased damage from flooding and typhoons, and an increased average air temperature, which means days when the heat index is dangerously high will become more common and impede military operations.

Guam was the site of iconic battles between U.S. and Japanese forces during World War II. 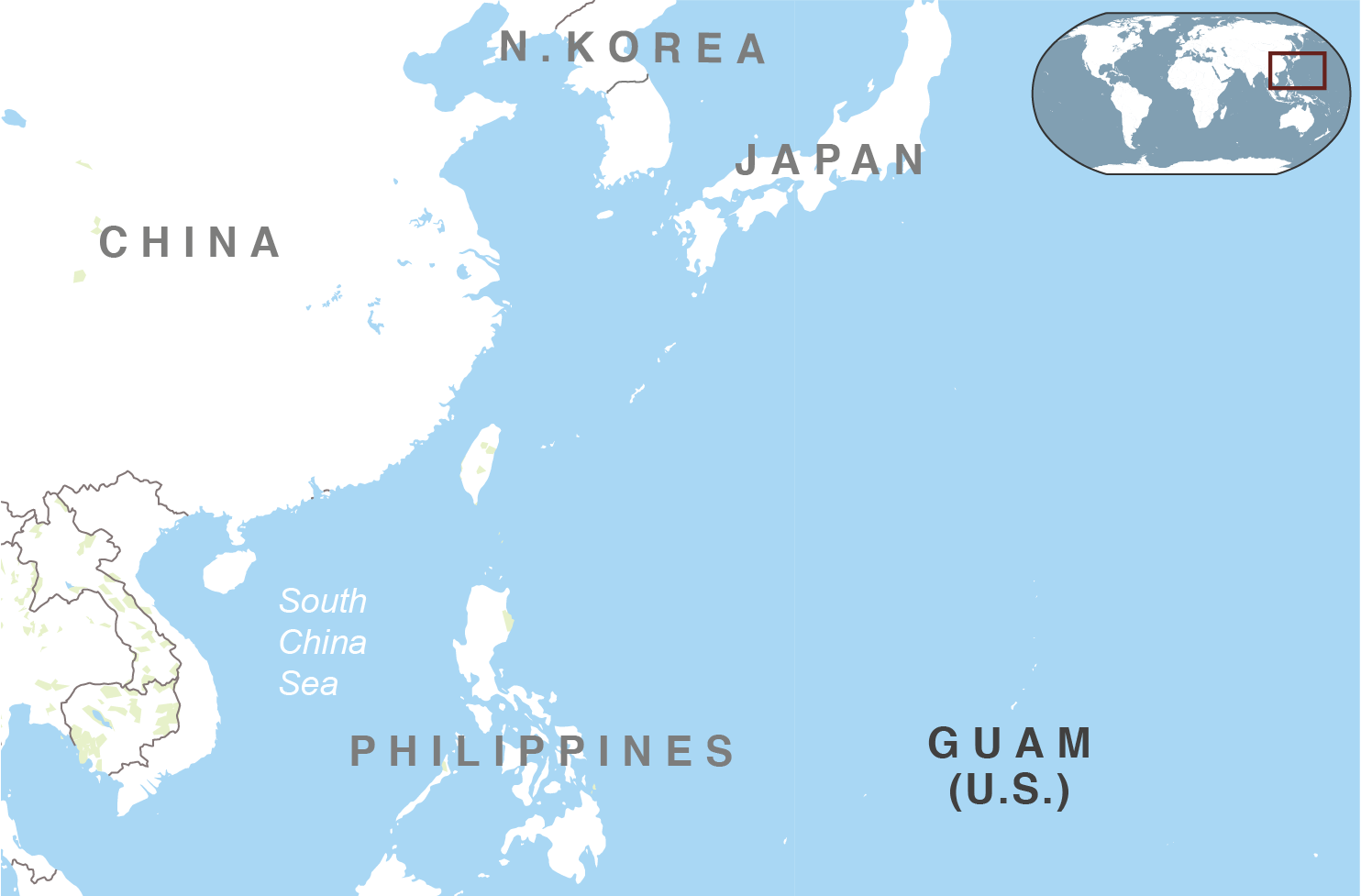 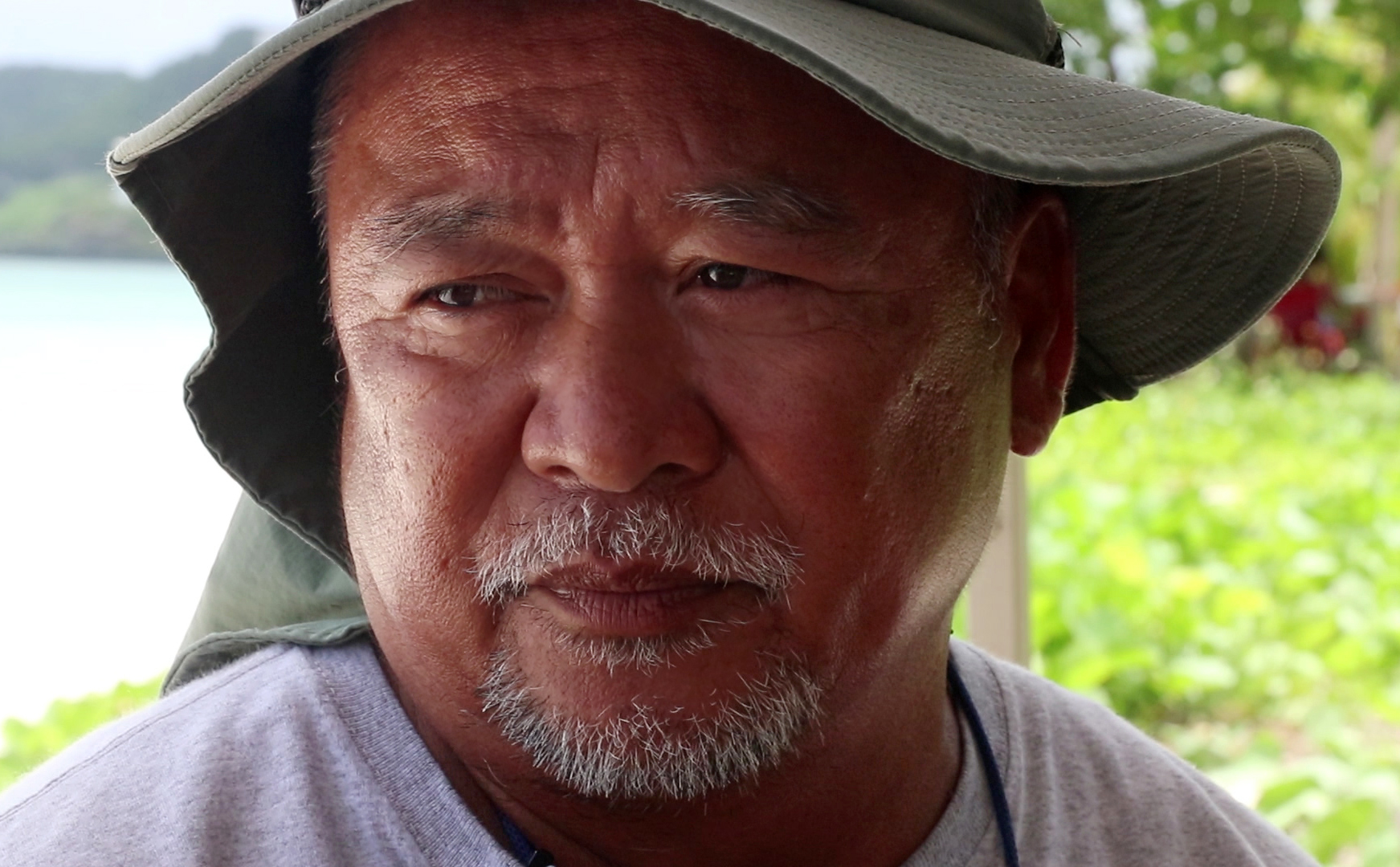 Vic Sahagon’s mother threw the talayeru to feed her family when he was a child, but it wasn’t until he was an adult that he decided to learn the ancient Chamorro fishing technique. (Gerald Harris / Medill)

Naval Base Guam boasts two submarine support vessels and four nuclear fast-attack submarines, which have been used to gather intelligence along the Korean Peninsula and in the South China Sea, where China has been building man-made islands to extend its reach.

Andersen Air Force Base, spread across Guam’s northernmost tip, has served as a launching pad for B-52 bomber runs over parts of Asia. Additionally, at least one anti-missile defense system is permanently based at Andersen.

The U.S.-held territory, with a population of about 167,000 – including about 7,000 naval and Air Force personnel in addition to their families—is where America projects her power westward towards Asia and the South China sea. 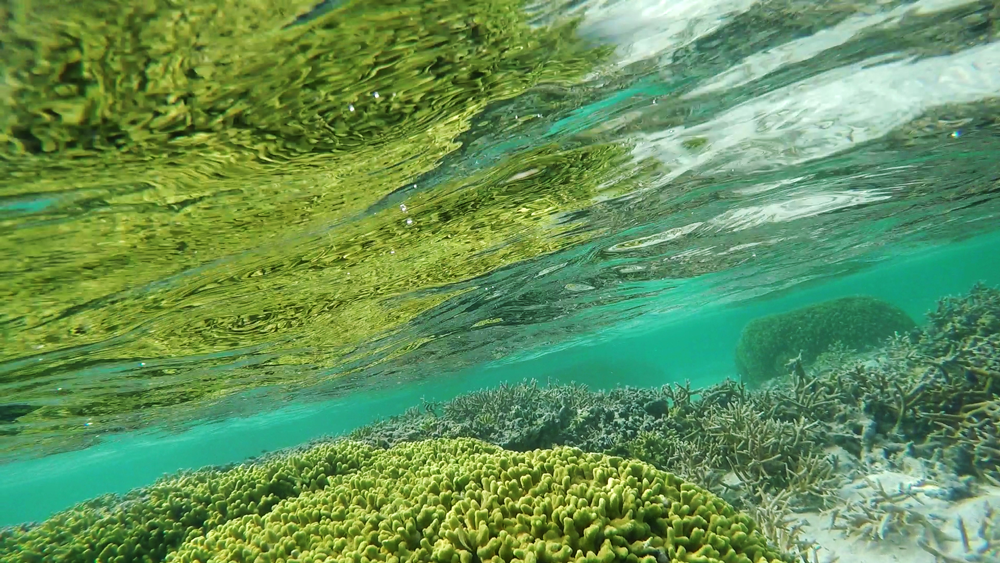 More than 500 species of coral make up Guam’s reef, which is one of the most diverse in the world.
(Kate Cimini / Medill)

The Trump administration has scrubbed mentions of climate change from governmental sites and documents, declining to formally recognize it as a national security threat. However, a 2012 report by the non-partisan American Security Project found Guam to be one of the five naval bases most threatened by climate change.

Global warming – the effect of man-made and natural emissions of heat-trapping gases –  threatens not only a way of life on Guam, but freedom for the U.S. to act unimpeded by restrictions that might be imposed by host countries in the Pacific.

Although South Korea and Japan play host to U.S. naval bases, those countries’ own political interests leave the U.S. facing restrictions on the number of troops stationed there, and even the types of missions it can launch from those bases.

Facing a stressed and dying protective barrier, increasingly strong typhoons and a diminishing supply of freshwater, sea level rise is the least of Guam’s concerns. 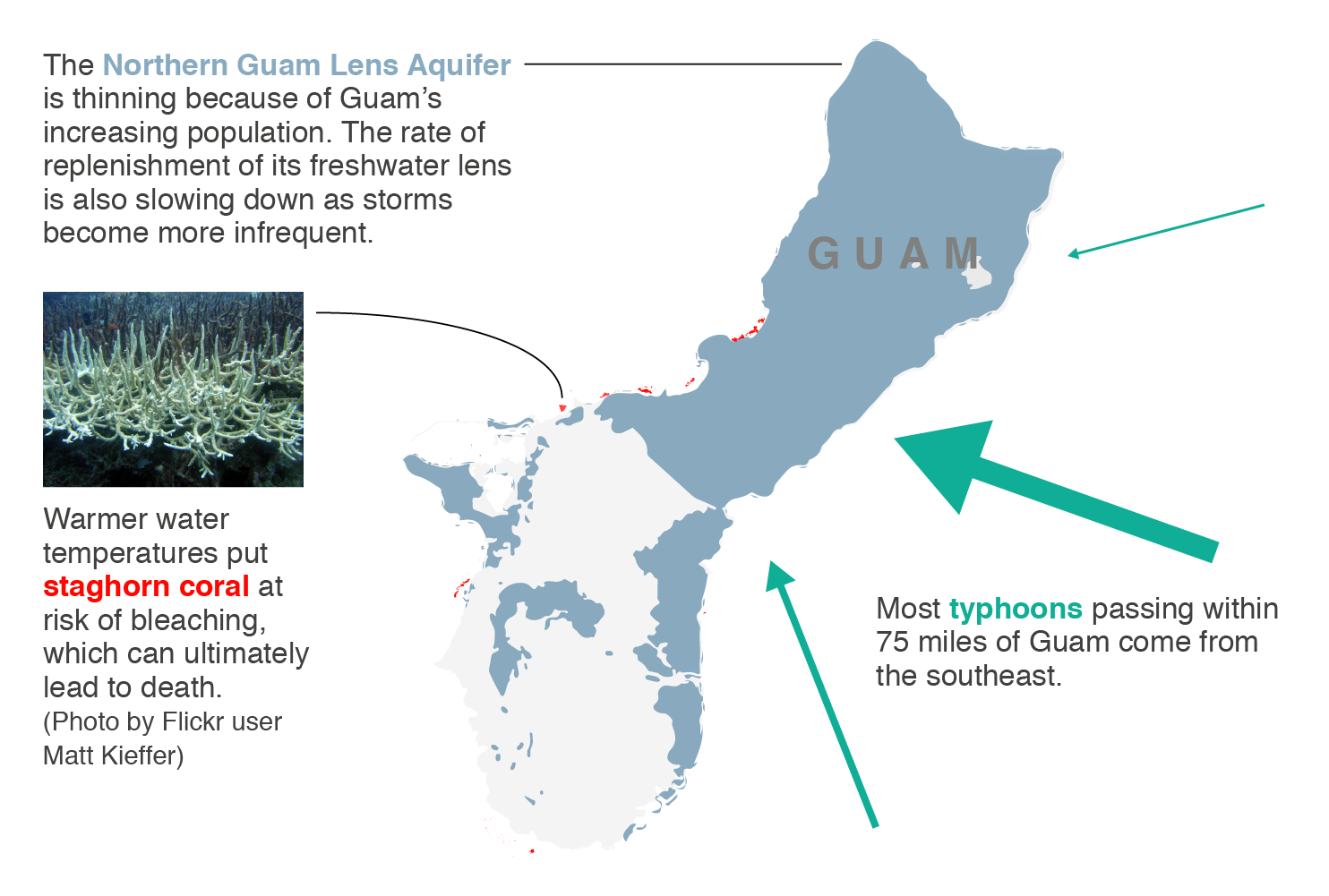 Indeed, over the past several years, the U.S. military has sought to relocate 5,000 Marines and their families from Okinawa to Guam to realign forces in the Pacific region and reduce political tension in Japan. That would nearly double the number of forces stationed on Guam and significantly increase naval water usage.

As Navy leaders grapple with the effects of climate change here, they must do so throughout the world as well. The Navy faces disastrous effects on its infrastructure and installations, as well as on human populations displaced by severe heat, rising seas and water shortages. 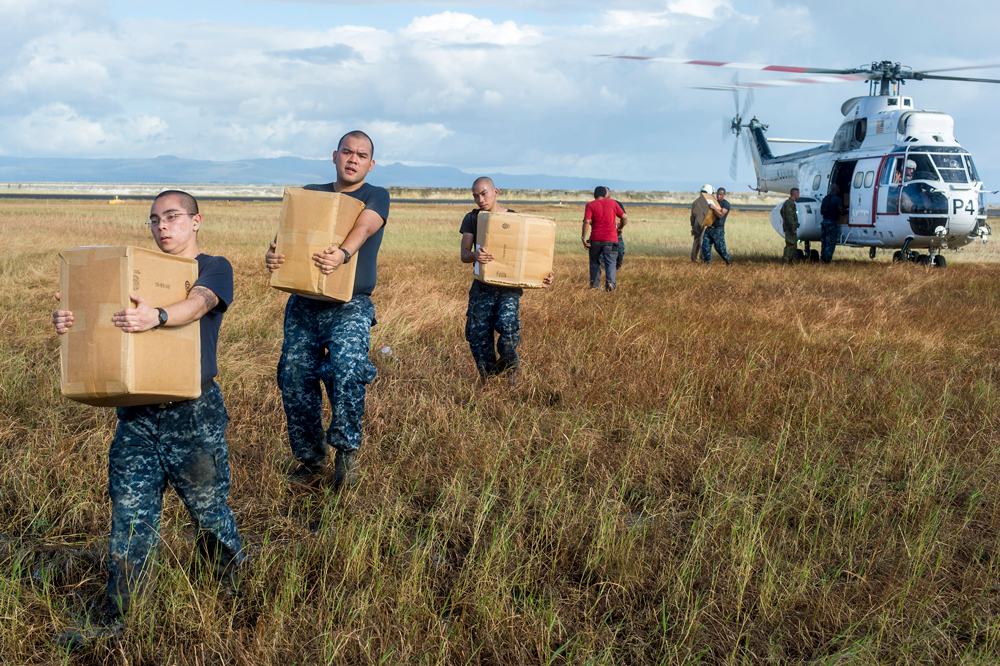 A 2010 report by the Department of Defense showed that more than 30 bases were at risk from rising seas; a 2016 survey by the Union of Concerned Scientists raised that number to 128 in the United States alone. Additional bases face threats from severe storms, warming oceans and the contamination of drinking water.

Guam is hugely important from a logistics standpoint in facilitating the flow of supplies to forces in the Pacific, said Retired Adm. Gary Roughead, a former Chief of Naval Operations who created a Navy taskforce on the impact of climate change on military operations in the Arctic. However, he said, other Navy sites face even more dire and immediate concerns, such as Naval Station Norfolk in Virginia. 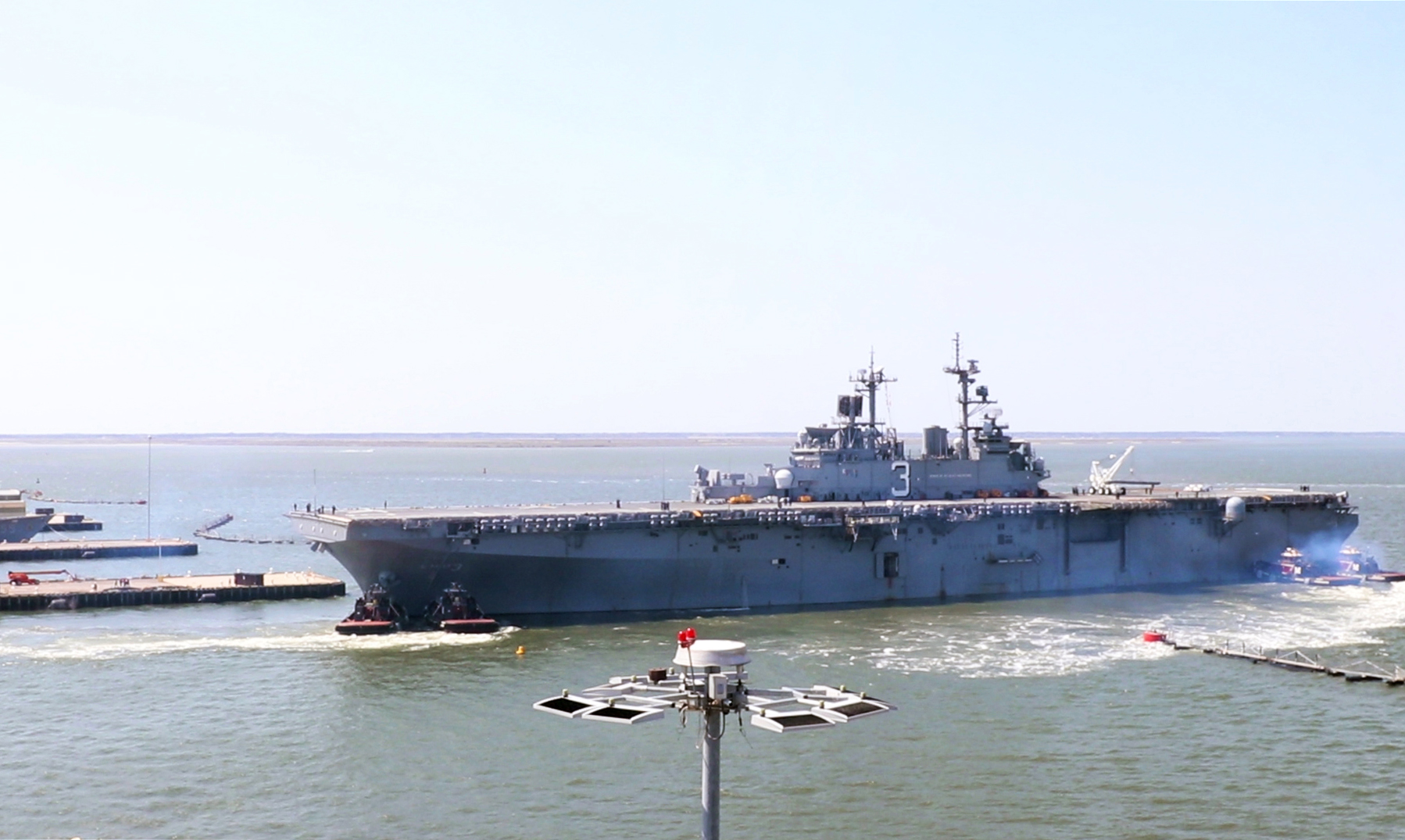 The USS Kearsarge, an amphibious assault ship, pulling away from Naval Station Norfolk docks in Virginia. Significant portions of the base are less than 10 feet above sea level. (Kate Cimini / Medill)

Norfolk, the largest naval installation in the world, is sinking into the ocean after decades of unsustainable groundwater use. Home to 75 ships and 134 aircraft, as well as over 80,000 active duty sailors, Norfolk routinely suffers crippling floods of roads and parking structures.

A  2014 Department of Defense study found one and a half feet of sea level rise to be a “tipping point” for Norfolk; at that point it will suffer significant infrastructure damage and losses in mission performance. Experts predict sea levels will rise a minimum of three feet-three inches within the next 100 years.

“All I know is that the climate and the planet are changing markedly, and we need to do things to get ready for that,” Roughead said, skirting the political contention over the causes of global warming.

“Unfortunately, there’s still debates about climate science and policy,” said Shana Udvardy, climate preparedness specialist at the Union of Concerned Scientists. “Last December, President Trump put out a national security strategy that wiped clean any mention of climate change. While this may be the case, the Navy understands climate change and they’re working to address it.” 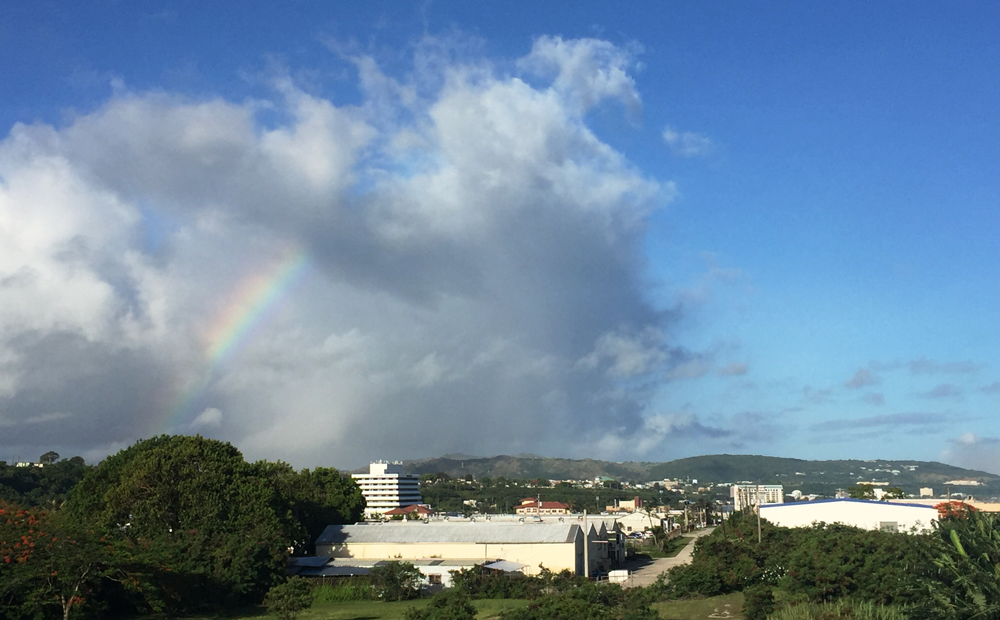 Climate change affects every aspect of Naval operations, from where sailors are based to how they are trained to when and where they are deployed.

Indeed, the Navy has shown significant interest in climate change vulnerabilities over the past several decades. It has built multi-story piers, worked with local communities, revamped training syllabi and cut back on construction in flood plains. It even deployed the Great Green Fleet in 2016, a group of ships that runs on a mixture of regular fuel and biofuels, in order to cut down on carbon emissions that contribute to climate change.

But some scientists say the U.S. military is still too slow to respond to a rapidly changing climate.

“Military planning hasn’t adjusted to some of the new studies at this point,” said Marcus King, an associate professor at the Elliott School of International Affairs at George Washington University. King formerly served as a research analyst at the Center for Naval Analyses and as a foreign affairs specialist for the Department of Defense. “They’re not really putting the worst-case scenarios into the planning process.”

Climate change also has amplified threats to U.S. national security, by increasing societal instability and fomenting terrorism in drought-sensitive regions while driving up the number of requests for humanitarian aid and disaster relief, analysts said.

Drought is a long-term threat to Guam, with climate change refugees from surrounding islands spurring that along. 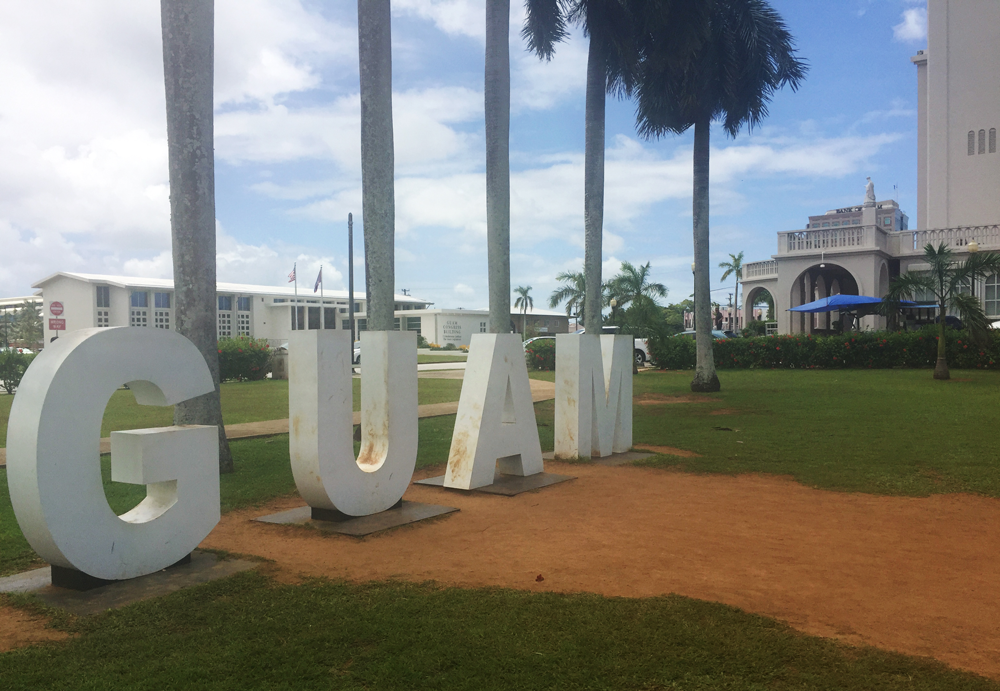 The large “GUAM” letters in Plaza de España. The plaza is a tribute to the time the island was a Spanish-held territory. (Kate Cimini / Medill)

Water contamination led to the closing of several wells in 2017, a small glimpse of a future with an overdrawn aquifer – a lens of freshwater perched atop the seawater beneath the northern half of the island. The Navy and the local government run the risk of triggering island-wide shortages of drinkable water by overdrawing the aquifer.

Navy and local officials have long managed their own water sources and rarely communicate about the areas or depths at which they draw water. But overdrawing water can introduce salt water into the freshwater, said Victoria Keener, a research fellow at the East-West Center in Hawaii who studied Guam’s aquifer with the U.S. Geological Society for a Department of Defense study.

The island is also beginning to see less rainfall, so the aquifer is being replenished at a slower rate than before, said Keener. She predicts this problem will grow worse over the coming century.

If mismanagement practices are not quickly corrected, Keener explained, those, in concert with slower replenishment would eventually spell disaster for Guam’s freshwater sources. 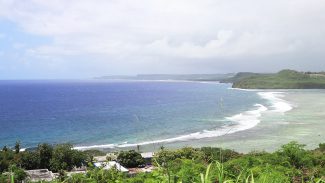 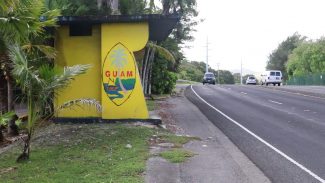 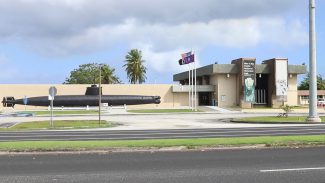 “The Department of the Navy is committed to transparent communication and partnership with communities, water authorities, elected officials, and state and federal agencies on water quality on and near our installations,” public affairs officer Lt. Ben Anderson responded, on behalf of the Navy.

The Kwajalein Atoll, located in the Marshall Islands more than 1,500 miles from Guam and ten feet above sea level, provides a warning of the effect of climate change on military installations. In 2016, long after the Air Force began building a $1 billion radar installation, experts assessed the small coral atoll would be uninhabitable by humans within 25 years from saltwater intrusion in its aquifer and sea level rise. 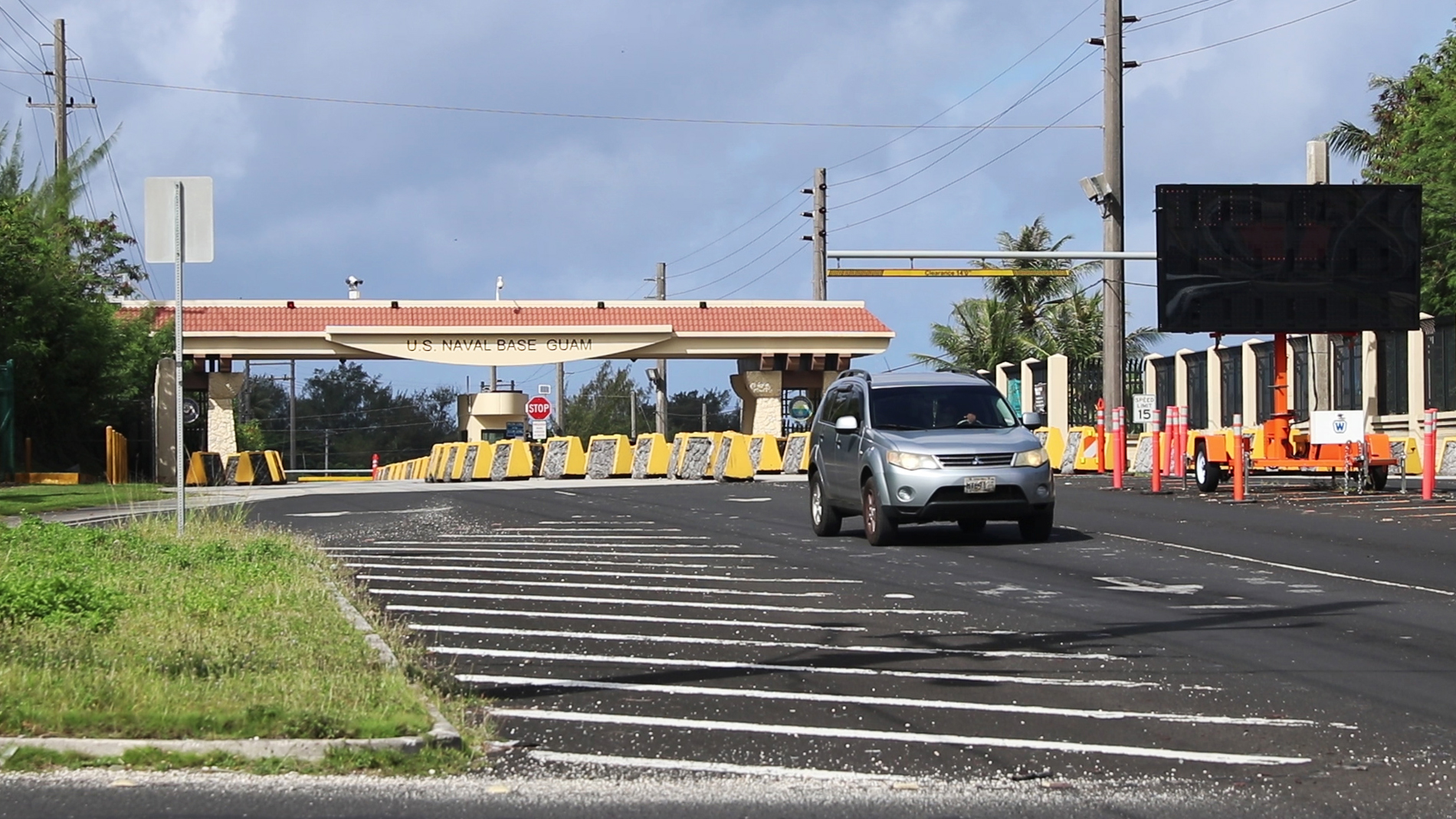 Approximately 3,000 troops are stationed at Naval Base Guam, which occupies a western peninsula on the island. (Gerald Harris / Medill)

Guam may face similar problems in decades to come, given the thinning of its aquifer. Drought could eventually force the Navy to either relocate or find alternate ways to hydrate its sailors and civilian contractors.

Although the Navy did not allow reporters for Medill News Service and USA Today onto its base in Guam, those familiar with the outpost describe it as well-protected from the elements. It is seated atop cliffs with low-slung, concrete buildings constructed to withstand typhoons. However, an overdrawn aquifer could spell the demise of the island.

At the same time drought begins to threaten Guam, the dying coral reefs that ring other low-lying islands in the Pacific are giving up the ghost. Soon they will no longer hold back tsunamis, or even strong waves that would eat away at an island’s footprint. Many of those fleeing such climate change will head for Guam, known as the metropolis of the Pacific. The addition of refugees atop growing numbers of tourists and military personnel will further stretch the island’s finite resources.

“Those people have no place to go,” said Underwood. “The demise of the coral reef and sea level rise means they’re facing an existential threat.”

“We have a number of those people living within a couple hundred miles of here,” Underwood added. “The potential demographic impact of that on Guam is large.” 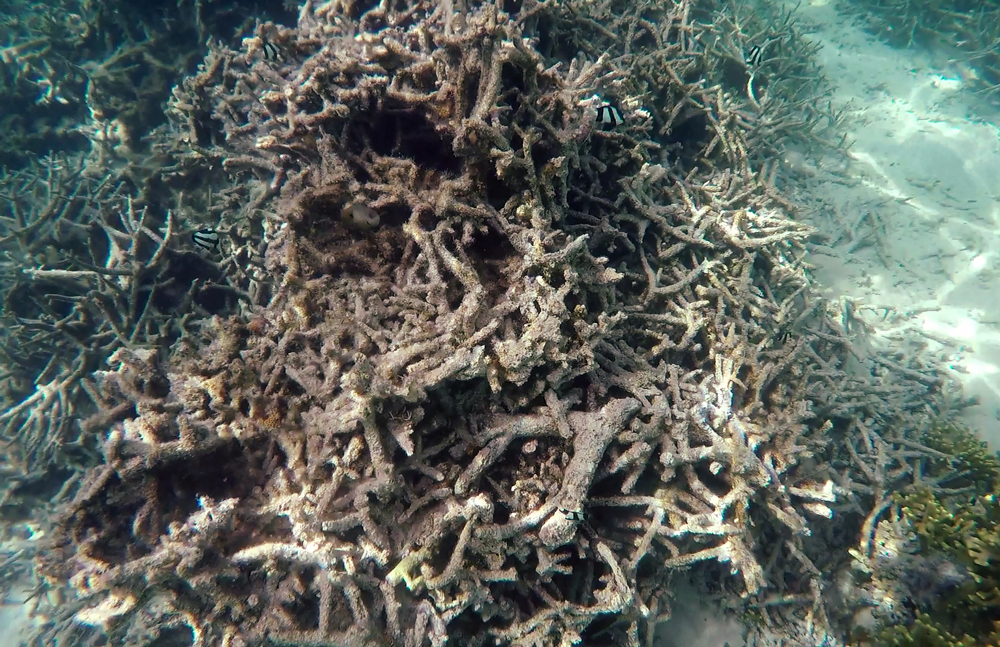 Without a consistent supply of freshwater, it will be difficult to sustain a base on Guam, leaving the Navy without local residents to work on the base, a community to employ their spouses or even educate their children.

That, in turn, can upset the Navy’s ability to carry out its mission. 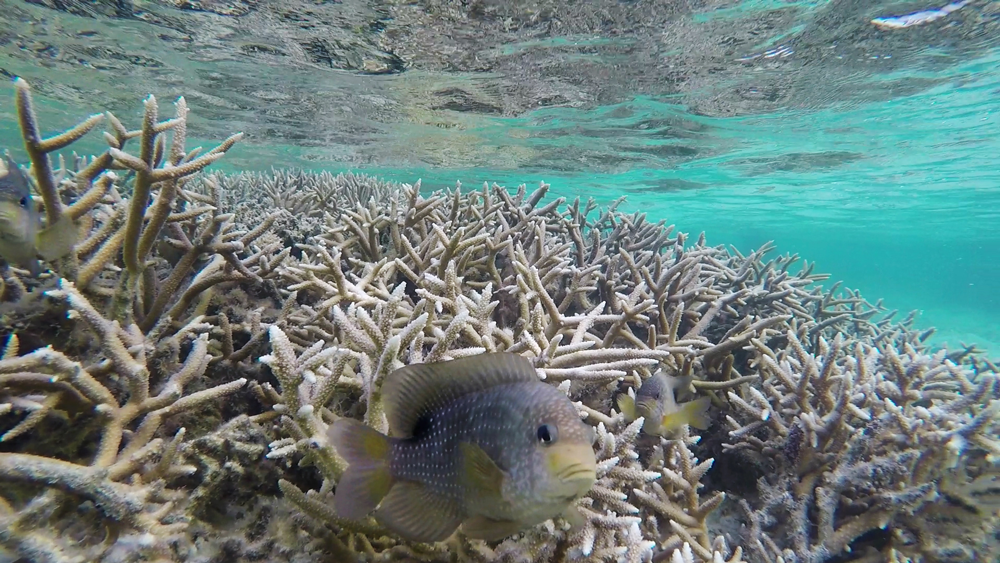 Staghorn coral — named for branches that mimic deer antlers — is also one most sensitive to warming waters and the increasing acidity of oceans. (Kate Cimini / Medill)