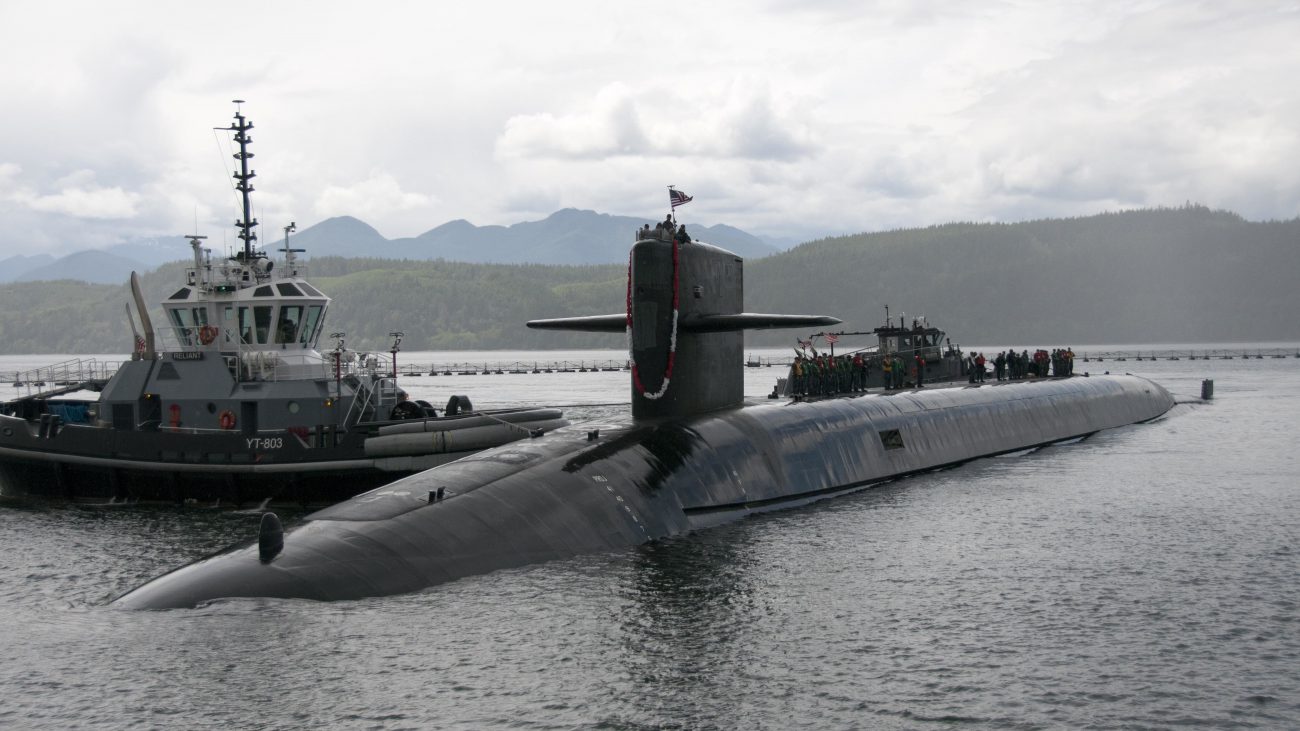 Beneath the surface, a quiet superpower race for nuclear supremacy

U.S., Russia and China rush to produce next generation of nuclear and attack submarines

By Yingjie Gu and Matt Sussis

WASHINGTON — The world’s three largest naval powers are all developing the next generation of their nuclear submarine fleets, accelerating the underwater arms race between the United States, China and Russia.

For now, at least, analysts say America remains by far the most dominant submarine force, even as its chief rivals work feverishly to overcome the U.S. advantages. Each country appears to have different strategic goals, with the U.S. bent on gaining greater cost and operating efficiencies while the Chinese and Russian are keenly focused on technological advances and achieving greater stealth.

Comparing the fleets:
How China, Russia and the U.S. stack up

Small surface combatants comprise the majority of China’s attack ships, while the U.S. dominates when it comes to larger combatants and aircraft carriers. Raw numbers aside, the U.S. has the war fighting edge when it comes to advanced technology, weapons systems and operational capabilities.

As tensions escalated in the South China Sea, these three countries — which boast the world’s largest navies — are aggressively preparing for any potential undersea or nuclear conflict, as they develop or perfect nuclear ballistic submarines (SSBNs) and attack submarines (SSNs). These nations have engaged in territorial disputes in those waters, and China has increased its submarine-intensive military drills as a show of force.

The U.S. has likely been underestimating the number of attack submarines it would need in the Pacific, given the heightened potential for conflict in the region, warned James R. Holmes, professor of strategy at the Naval War College.

“You need to divide the number [of total ships] by two, three, or even more to estimate realistically how many ships are available for duty on any given day. The rest are in overhaul, undergoing training, or relaxing after deployment,” Holmes said. “So, divide the number of SSNs in the Pacific by three, then look at the map. That’s very few boats to manage events in the world’s largest body of water.”

The attack submarines are armed with various cruise missiles designed to hit closer-range land and sea targets. They are specifically designed to attack and sink other submarines, surface combatants and merchant vessels.

The nuclear ballistic submarines are equipped with nuclear weapons capable of delivering a retaliatory or preemptive strike almost anywhere in the world. Combined, these two types of submarines make up the preponderance of what will likely be the future of undersea warfare.

“The surface of the sea — and the sky above — is an extremely hazardous place in this missile and drone age, while the ocean has remained mainly opaque despite advances in sensor and computer technology,” said Holmes.

U.S. nuclear triad: Where the warheads are

The Navy’s stealthy submarine force carries the majority of the country’s 1,393 warheads. 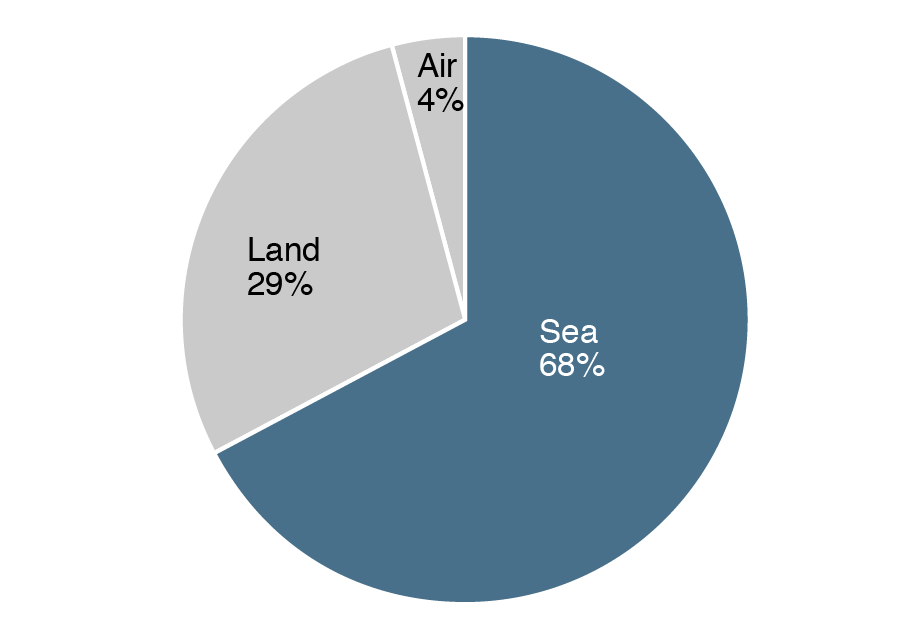 Percentages do not add to 100 percent because of rounding.

SSBNs, or “boomers,” hide in the ocean and can launch nuclear ballistic missiles at an enemy anywhere in the world even if the rest of a nation’s nuclear triad of air- and ground-based missiles is destroyed. They are the guarantors of mutually assured destruction in the event of nuclear war.

Some analysts say that these boomers will be increasingly crucial to the national security strategy of all three nations in the coming decade.

“There is no higher priority for the U.S. Navy than SSBN recapitalization,” said J.D. Williams, a retired Marine Corps colonel and senior defense researcher at RAND Corporation, who said SSBNs play a major role in the Navy’s big-picture decision making.

The United States is building its first Columbia-class SSBN to replace the Ohio-class, and the Navy anticipates the lead ship will be completed by 2027. The Navy should have 12 Columbia-class boomers by the 2040s, according to General Dynamics, a Navy submarine contractor.

SSBNs are submarines that are capable of deploying ballistic missiles with nuclear warheads, making them a crucial element of the policy of mutually-assured destruction for nuclear deterrence. 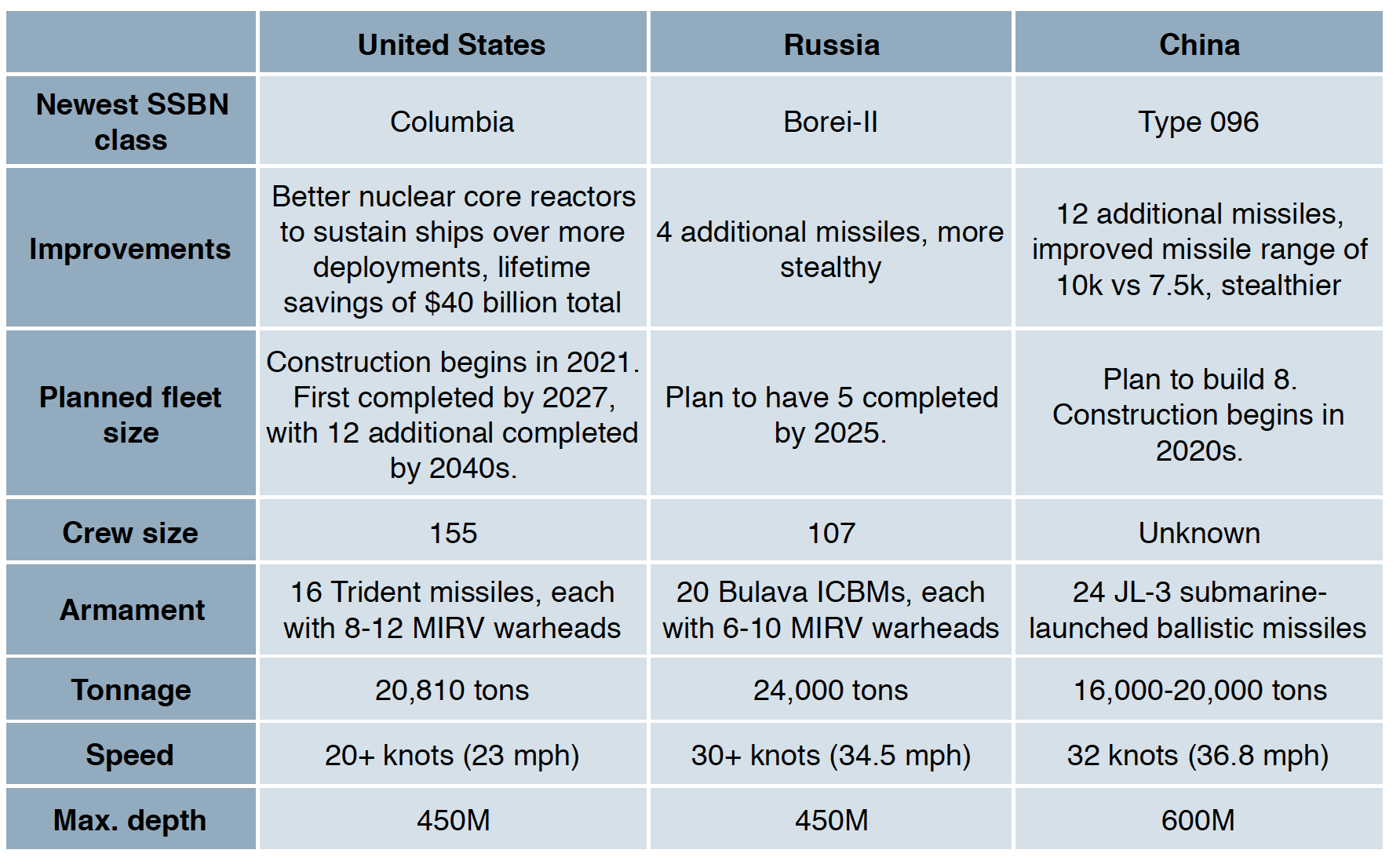 The United States is building its first Columbia-class SSBN to replace the Ohio-class, and the Navy anticipates the lead ship will be completed by 2027. The Navy should have 12 Columbia-class boomers by the 2040s, according to General Dynamics, a Navy submarine contractor.

Meanwhile, Russia expects to complete four Borei-II submarines by 2025, and China will begin constructing Type 096 submarines in several years, both of which will be able to travel at speeds of more than 30 knots – or about 10 knots faster than the new Columbia-class SSBN. While the United States is most focused on the lifetime savings from the Columbia-class’s improved nuclear core reactor, for both Russia and China’s next generation of boomers, speed and stealth are key.

“Currently, the U.S. advantage is in quieting, so I’m not surprised to see Russia and China try to close that gap,” said Bradley Martin, a senior policy researcher at RAND and a retired Navy captain, in discussing submarine stealth. “The U.S. is already at a background noise level, and you can’t get much quieter than that.” 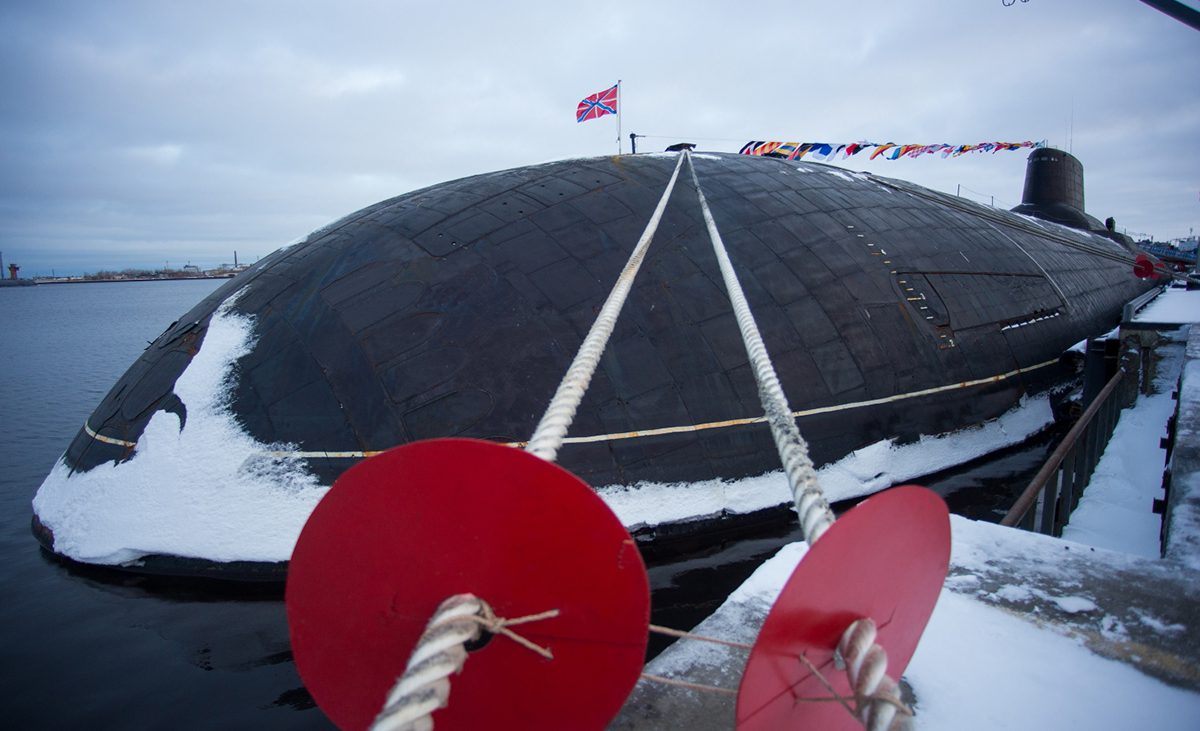 Russia celebrates the 35th anniversary of the world’s largest submarine, the Dmitry Donskoy TK-208 Nuclear Ballistic Missile Submarine, at the Belomorsk Naval base, Northern Fleet, in northwest Russia. The Typhoon-class sub was commissioned in 1981. (Ministry of Defence of the Russian Federation)

The U.S., Russia and China are locked in an intense competition to develop the most sophisticated next generation of SSNs.

Because attack submarines carry cruise missiles, they constitute a navy’s most crucial and versatile weapon in any frontal assault. Cruise missiles are designed to deliver a large warhead over long distances with high accuracy, and they are intended to hit both land and sea targets.

The U.S. has built 13 Virginia-class attack submarines and is expecting 15 more by the end of 2018. China and Russia are also expanding their attack submarine fleets, albeit at a slower pace. China is currently constructing two additional Type 095 submarines and has five more planned, while Russia expects to have six more of its Yasen-M class submarines by 2020.

While America’s new attack submarines are intended to have longer operational lives and more flexibility, Russia and China are more focused on avoiding detection. Russia wants stealthier and more heavily armed SSNs while China is digging into quieting technologies. 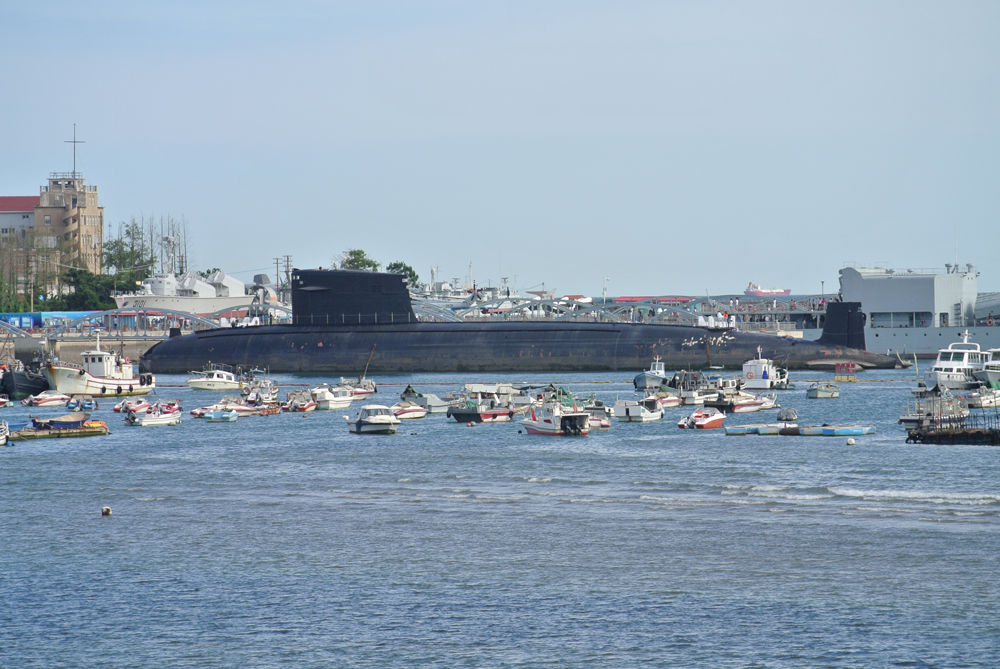 China’s first nuclear submarine, the Long March-1, a Type 091 Han Class Changzheng-1 submarine, was built in 1970. It was decommissioned in 2013 and is on display at the Naval Museum in Qingdao, China. (Stefan Tsingtauer / Wikimedia Commons)

However, Russia’s weaker industrial base could put a damper on its lofty submarine improvement plans, according to some analysts.

“The Severodvinsk is way quieter than anything we’ve encountered and it’s got everybody spooked,” said Washington naval analyst Christopher Cavas. “But the problem is Russia’s industrial base just isn’t very good. They come up with these brilliant designs but the ships don’t end up brilliantly built.”

In 2000, a Russian cruise-missile submarine—Kursk—sank, killing all 118 sailors on board. The Russian government concluded the ship sunk due to a faulty weld which caused a gas leak and led to an explosion.

Despite improvements in Chinese and Russian submarines, the U.S. Navy said it remains confident that its investments will ensure America’s next-gen submarines remain the world’s dominant operational fleet.

Cavas agreed, and said the Virginia submarines remained in a class by themselves.

“The truth is that nobody else has the front-end of the Virginias,” said Cavas. “On top of these capabilities, they have a whole new reconfigurable weapon space for more flexibility. We’re ahead of the Russians, and the Chinese really don’t have anything of the same degree on this.”

SSNs are submarines that can launch ballistic missiles, accommodate special forces,
and carry out intelligence and surveillance tasks. 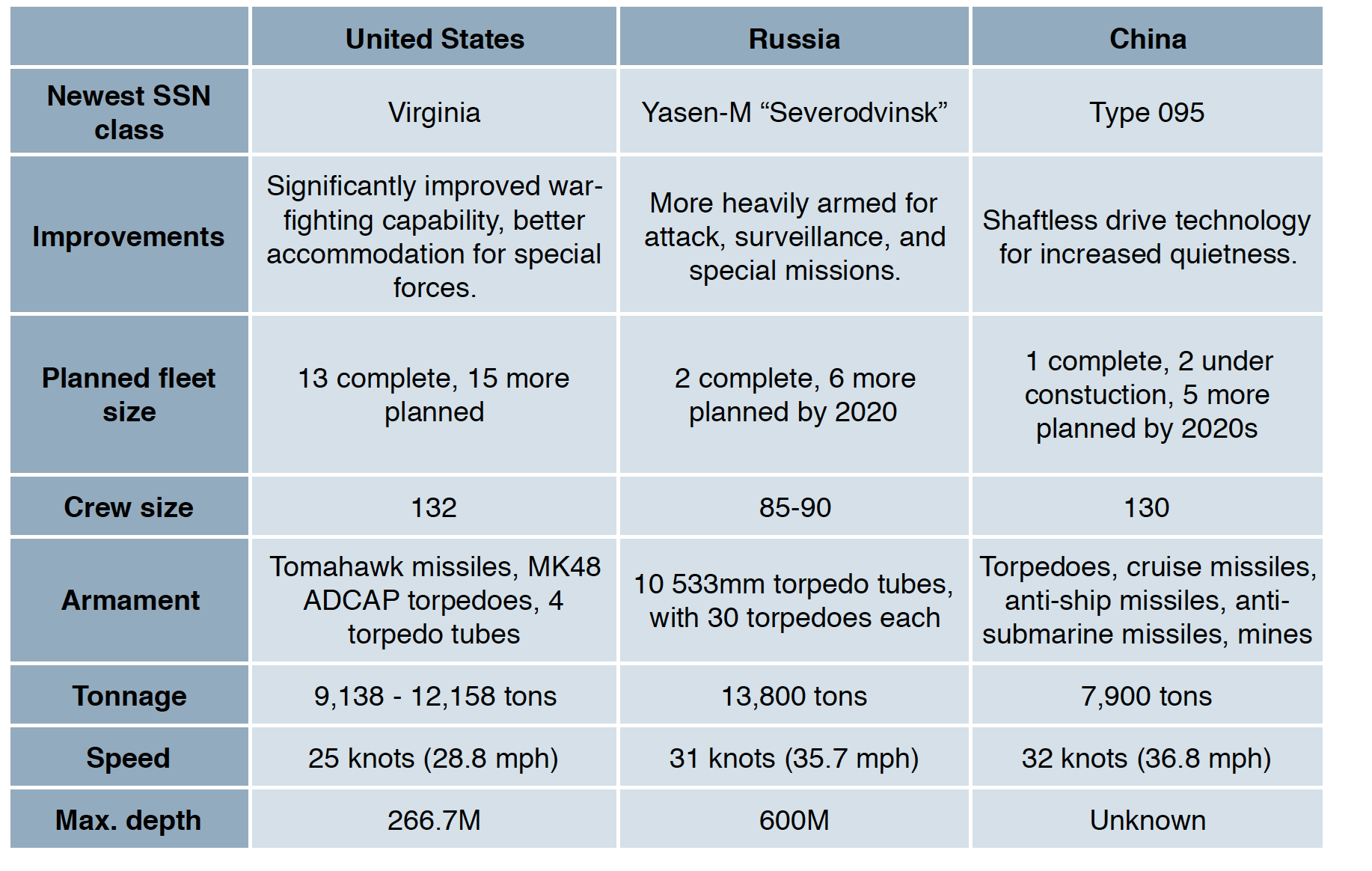 The Pentagon is also seeking to improve its submarine fleet through new technology such as underwater drones. The Defense Advanced Research Projects Agency (DARPA) is working on an underwater “truck” called Hydra which could host unmanned aerial drones, and release them into the air to conduct missions upon reaching a certain location underseas.

Hydra remains in development, and DARPA awarded funds to Boeing last year to provide continued support in their construction, and Boeing expects its current contract to expire in early 2019.