MAFRAQ, Jordan — Abdul Munem checks the label on the mayonnaise he’s selected from the shelf. He shrugs and places it in his cart. Even though this supermarket only carries two brands, he scrutinizes each bottle.

Munem, 42, is originally from Homs City, Syria. His ability to choose the food his family eats is new for refugees. It’s a novelty afforded to Syrian refugees living in Jordan through a food voucher program funded by the United States International Development Agency, USAID.

The voucher program, run by the United Nations’ World Food Programme, the organization that heads the U.N.’s food aid distribution, is the largest of several food programs supported by the U.S. government in the countries surrounding Syria.

Experts say this new approach is the way of the future.

“The programs that USAID is supporting in Jordan right now for Syrian refugees are a hallmark of the kind of approaches we want to use more of,” said USAID Assistant Administrator Nancy Lindborg.

Once a month the World Food Programme and its partners distribute $34 per person in food vouchers. Refugees then use the vouchers at participating shops to buy groceries. Although there are other food initiatives in the country, the voucher program is the largest, reaching over 80 percent of Syrians living in Jordan.

“The whole Syria response is not the most unique thing we’ve ever done, but it’s got a lot of new elements that we don’t normally do,” said Matthew Nims, the deputy director of USAID’s Food for Peace program.

From when the voucher program started in August 2012 until the beginning of this year, 300,000 Syrian refugees had redeemed $100 million worth of vouchers in Jordanian shops according to WFP.

The U.S. is the largest donor to the World Food Programme in Jordan. Since the beginning of the conflict, the U.S. has spent $971 million in food assistance for Syria and neighboring countries.

Andrew Harper, the Jordan country director for the United Nations’ Refugee Agency has been involved in the refugee operation since the crisis started over two years ago.

“In many aspects we’re actually pushing the envelope,” said Harper. “We’re trying to make things more sustainable, and also to address the needs of the refugees.”

The Benefits of the voucher 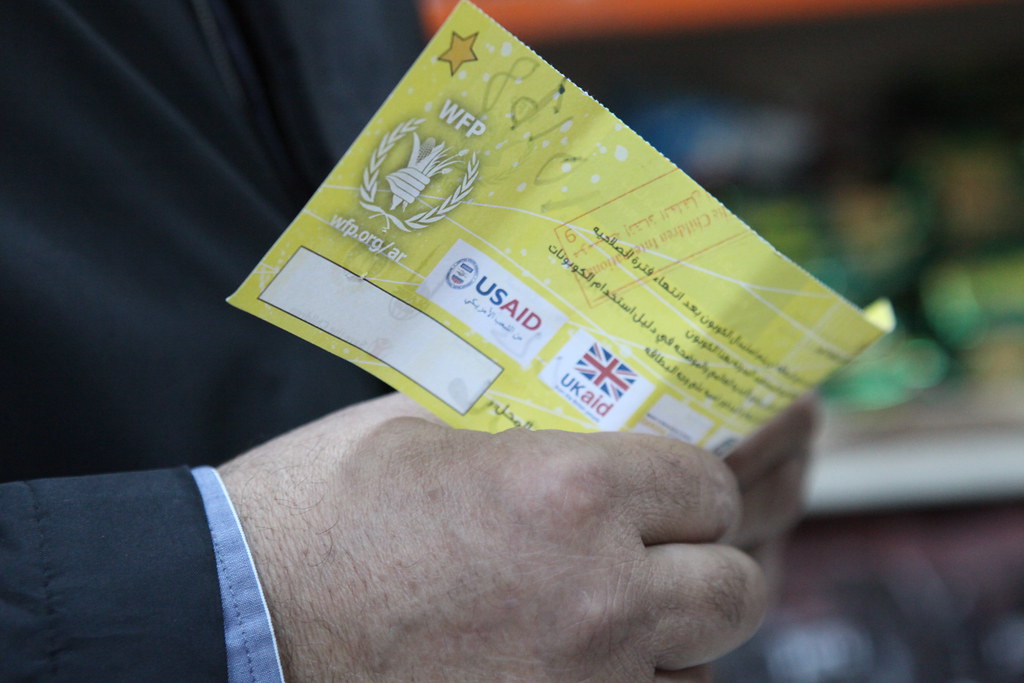 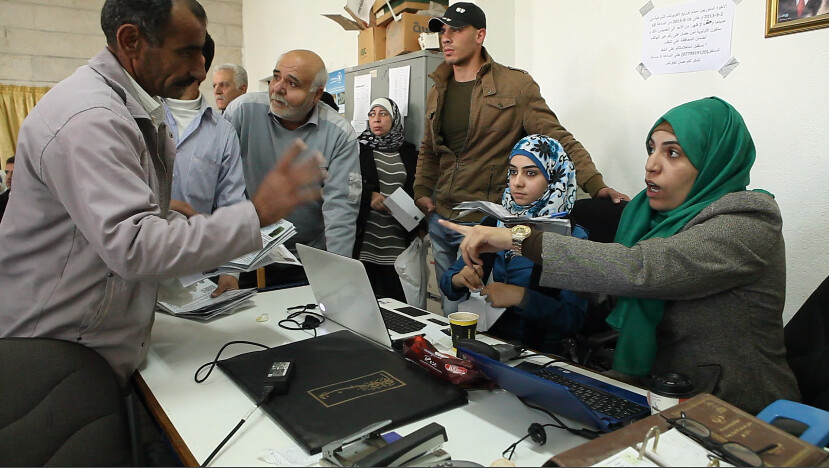 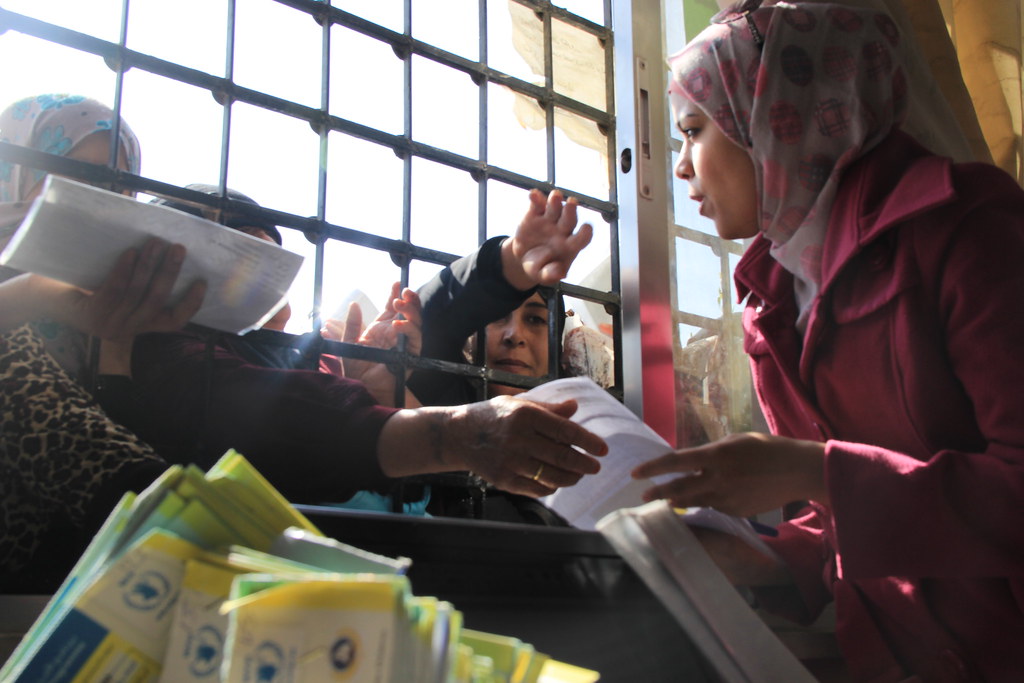 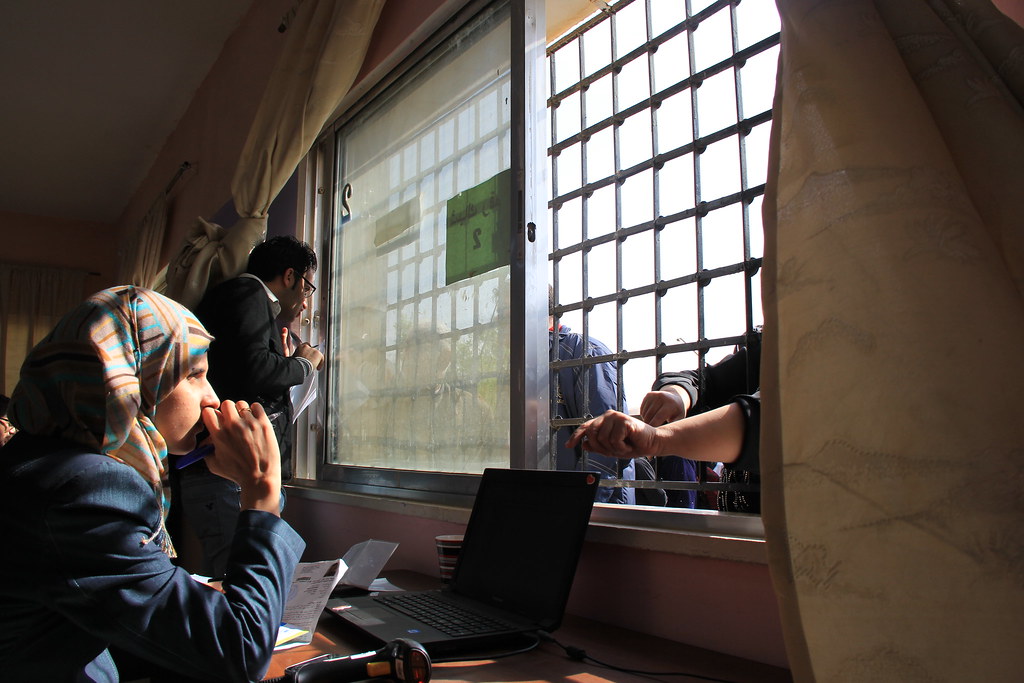 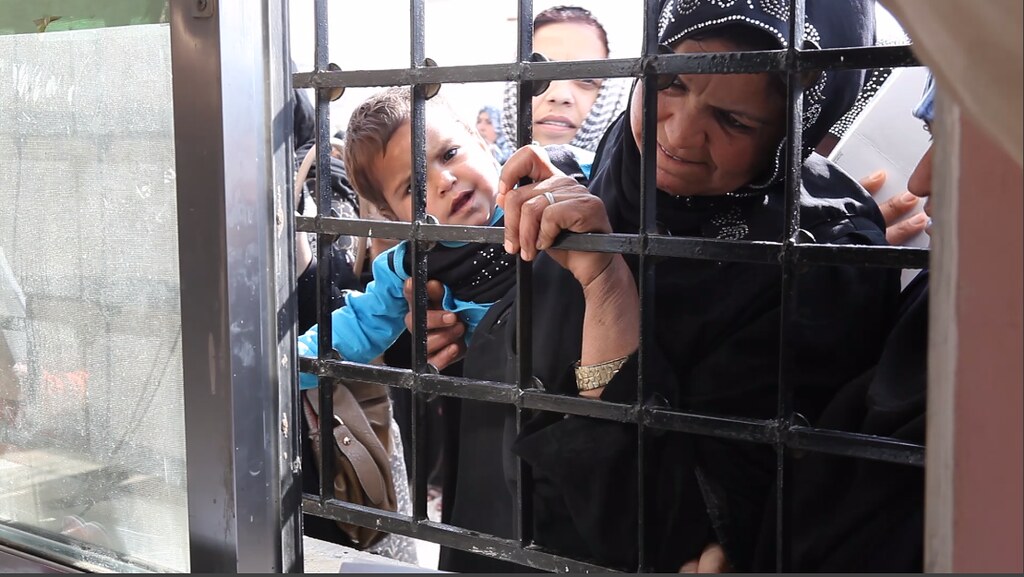 Syrian refugees are different from many refugee populations. Before the war, Syria had an educated, middle-income population, many living in modern cities, with stable jobs and a strong sense of history and cultural identity.

“We’re seeing a population that is relatively urbanized,” said Harper. “We’ve got refugees coming from a former middle income country who had quite extensive diets and extensive desires and expectations about what their future lives would have.

Like Abdul Munem, over 80 percent of Syrians in Jordan live in urban areas – not in refugee camps, according to the UNHCR, the U.N.’s refugee agency.

For them, life can be difficult.

Munem was a lawyer in Syria. He struggled without work in Jordan, spending his days volunteering at a kindergarten for Syrian children. He sold his car, and has spent his savings on his apartment, heat and bus fare to get his three children to school.

“Refugees living outside the camp face different struggles,” said Dina El-Kassaby, spokeswoman for the World Food Program. “Jordan is an expensive country. They have to pay rent, electricity and water.”

“The voucher program is a way for us to ensure that people are getting the nutrition they need while they are dealing with the other financial burdens of living in an urban setting.”

Refugees are able to function in their communities, shopping alongside Jordanians, comparing brands of coffee and rice, and purchasing foods specific to the Syrian diet.

The existing infrastructure in Jordan enables the fluidity of the vouchers. There are grocery stores, local markets and a large number of local and regional food suppliers.

“The region has a very long standing, sophisticated market structure,” said Nims. “You don’t want to bring in 2 to 300,000 tons of food from an outside market to disrupt the already well-functioning markets.”

The voucher system is contributing to Jordan’s economy, which is important for a country already poor and buckling under the stress of an additional half a million Syrians.

The World Food Programme estimates the voucher program has injected over $100 million into the Jordanian economy since its inception. Local groceries that accept the vouchers in their stores have seen a surge in business.

Khori has hired more staff, expanded the physical size of his store, installed two additional checkout counters and increased the number of food contractors with whom he does business.

One of Khori’s customers is Fatemah, 42, who came to Jordan with her son, his wife and their two children. She said the vouchers allow her to “get the things that [she] wants.”

The family now lives in Amman, but when she first arrived in Jordan she and her family stayed in Zaatari refugee camp where they received boxes of food rations. 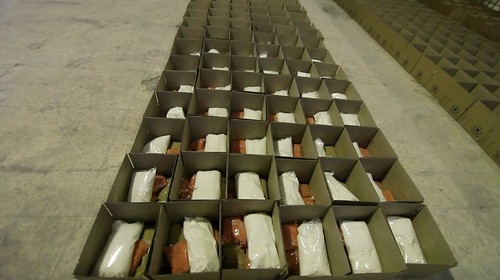 “They have the same items in the parcel every time,” she said. “Now that we’re in Amman, we don’t get the same thing. We know what is necessary for our homes and bring it by using vouchers.”

Fatemah’s frustrations with food parcels and her enthusiasm for the vouchers are echoed in Jordan’s refugee camps.

Zaatari refugee camp in northern Jordan, home to over 100,000 Syrians, is phasing out their food rations and shifting to a voucher based system that mimics what is happening in urban areas. 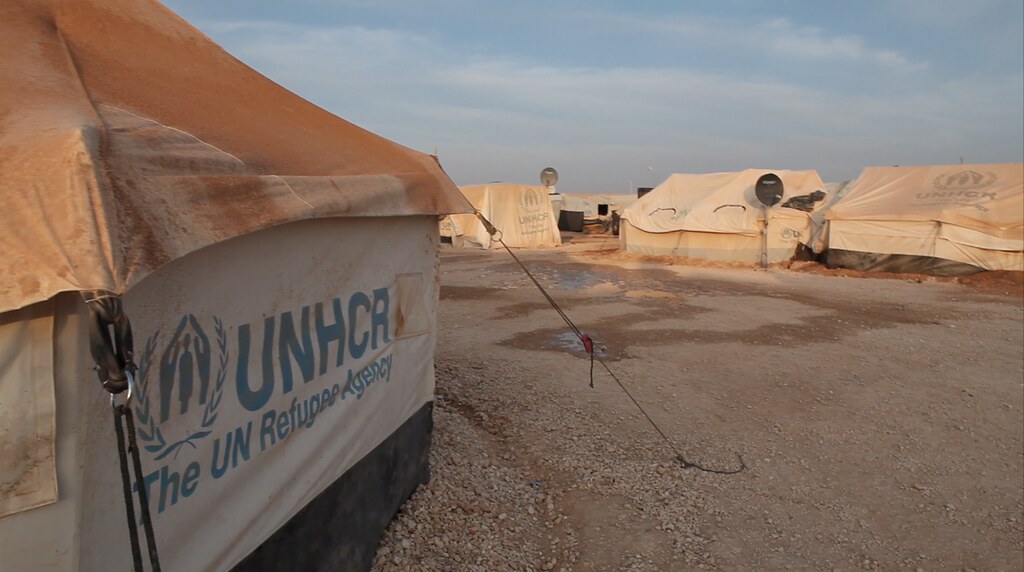 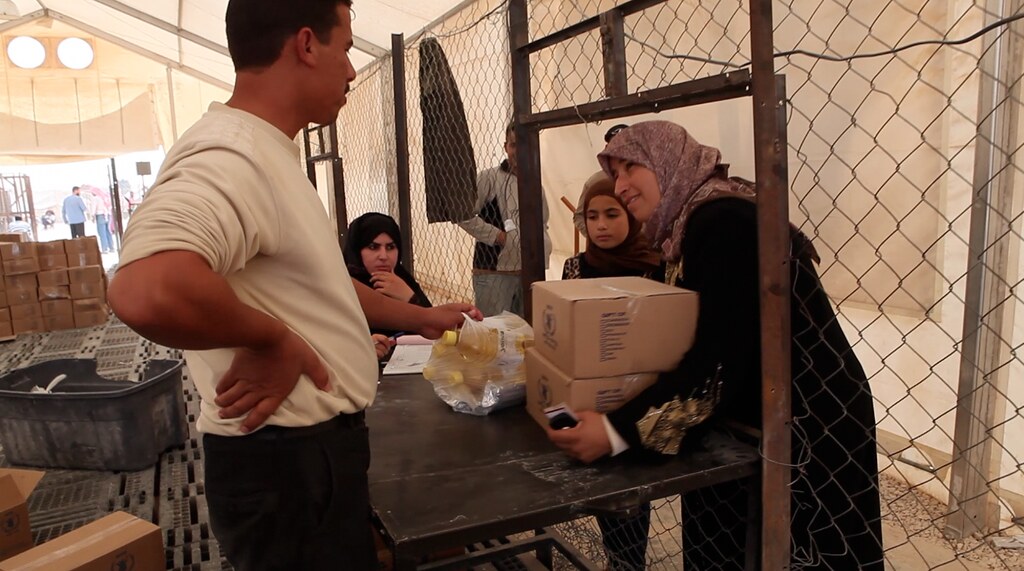 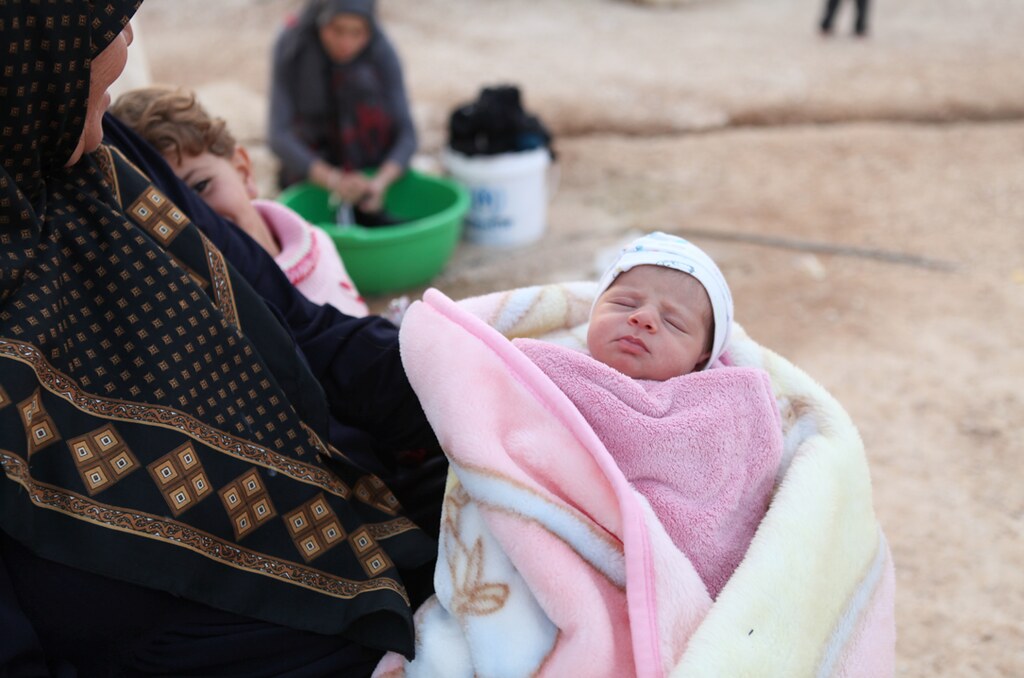 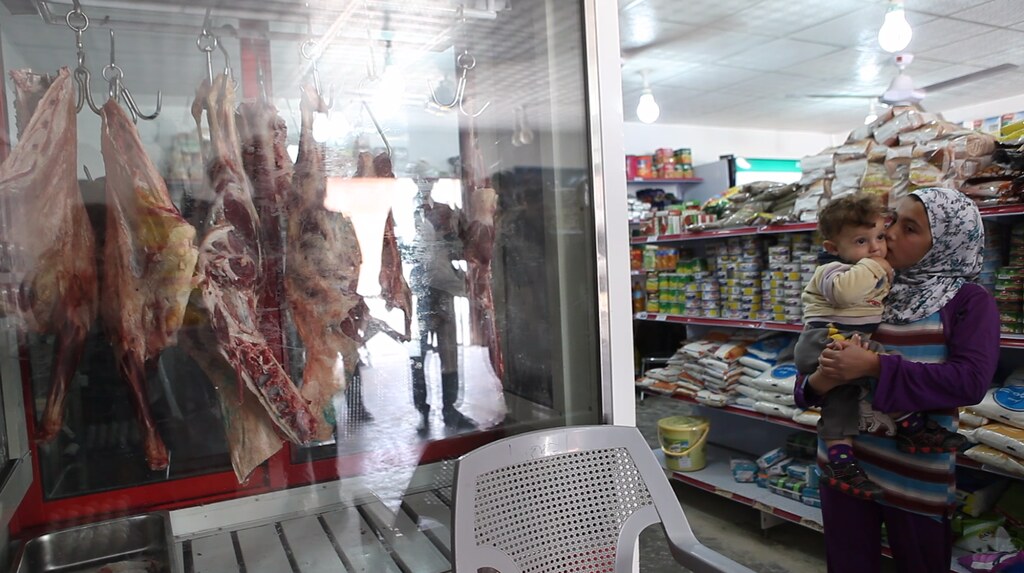 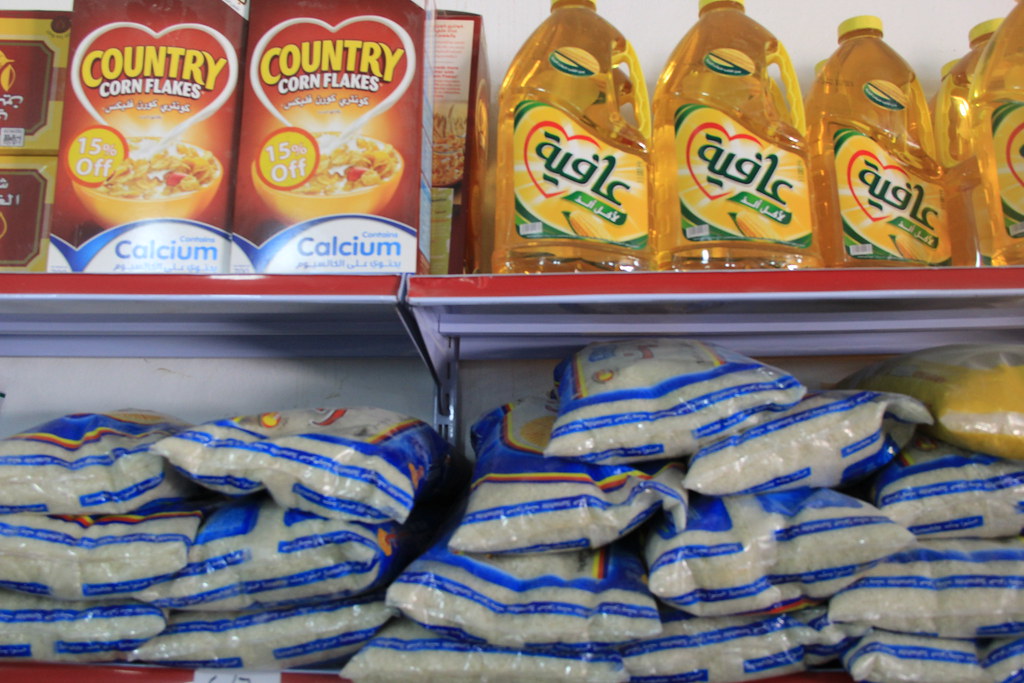 The move is a response to the success of the voucher program outside of the camp. Many Syrians living in Zaatari have friends and relatives in urban areas who say they like the flexibility that vouchers provide.

“Instead of us deciding on their behalf, it was a consultative decision. The refugees were involved in the decision,” said Elrashid H. Hammad, WFP’s head of office in Mafraq. “There is already a market here inside the camp and the vouchers give them flexibility, freedom of choice and the right to choose what type of items they want to buy.”

The WFP expected to phase out the food boxes by early 2014. In some cases it’s a painful process, a change in the way WFP has been doing food aid for decades.

“The World Food Program is all about logistics,” said Samuel Terefe, WFP’s Head of Logistics in Jordan. “But this change to vouchers is what’s needed. It’s what the people want and what they need.”

Terefe says the transition from food to vouchers is a representation of the new way of doing food aid. He says it’s faster, improves efficiency and is more dignified, giving the power of choice to the many refugees unable to provide for their families.

The World Food Program is transitioning from food parcels to vouchers in Zaatari refugee camp.

The voucher program is not perfect. There is some fraud; however both USAID and WFP say it is rare and that the safeguards they have put in place work. There are also only a limited number of shops participating in the program, so there is less pressure to be competitive. The WFP said it is monitoring prices to ensure shops are pricing their food at market value.

Some critics say overhead costs stemming from running voucher distribution centers hold the program back. They propose using e-cards. In Turkey and Lebanon, the World Food Programme partners with Mastercard and Visa to distribute cash electronically that can be redeemed in any store with a card reader.

WFP is experimenting with e-cards in Jordan. It launched a pilot project last fall with 10,000 families and plans to install card readers in shops throughout Jordan.

The Future of Food Aid

The evolution of aid in the countries surrounding Syria functions as a microcosm for food aid in general; the slow evolution from buying and shipping food to sending cash or giving vouchers is a change many countries have already undergone.

“We’re looking at how we provide the necessary food to refugees, at the cheapest cost, but also while giving much more responsibility to the refugees for determining their future,” said Harper.

“You just always have to put yourself in the position of the refugee. What would you prefer? I think in the end we’re going to be moving toward refugees being able to make the choices themselves.” 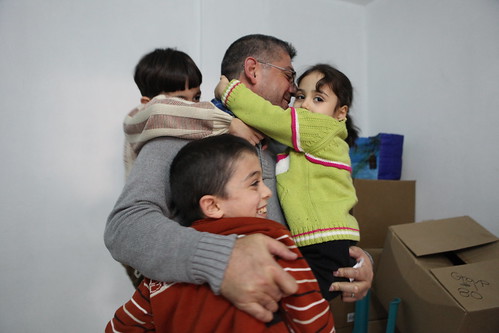 Abdul Munem, 42 with his daughter Marwa, 4, and two sons Muhammad, 7, and Abdul Rahman, 8, at the family's home in Mafraq, Jordan. (Elissa Nadworny/MEDILL)

Abdul Munem, who came to Jordan more than a year and a half ago, has filled his shopping cart to the brim. He decided to get the brand of mayonnaise he bought last month.

For the most part, he’s been frustrated, searching for a better life for his family. But he’s grateful for the vouchers. He’s starting to fall into a rhythm in Jordan, going to the grocery store every two weeks, with his grocery list in one hand, and in the other, the bright yellow food voucher. Without it, Abdul Munem said, he would not be able to feed his family.