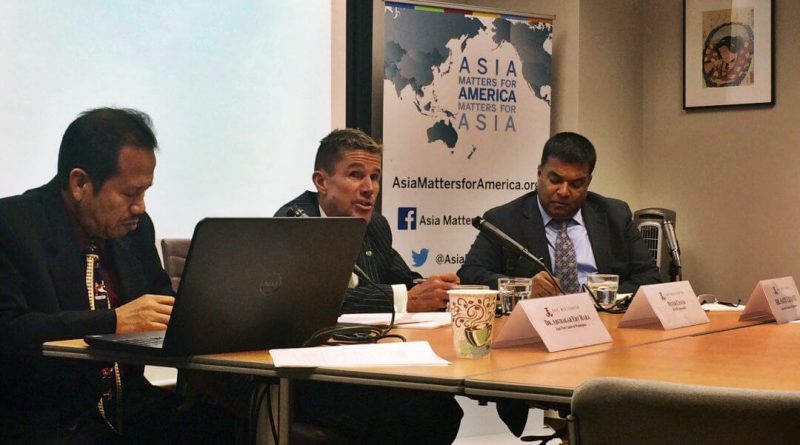 Abubakar Eby Hara, a senior lecturer at the University of Jember and a fellow at the East-West Center, a government-funded think tank for Asia-Pacific issues, noted that Indonesia’s status as a Muslim nation with weak infrastructure makes it a good target for extremists. But its strategies have led to its relatively low share of ISIS foreign fighters, he said.

East-West Center Director Satu Limaye agreed: “What jumps out at me is the relatively small number of people radicalized in an environment that is quite open to radicalization.”

Indonesia has the world’s largest Muslim population, with Pew Research Center estimating its global share at 13 percent. The total population, which is 85 percent Muslim, is nearly 260 million.

But only about 500 Indonesians have joined ISIS, and roughly just 1,200 are considered sympathizers, Hara said.

The Indonesian government has made quantifiable efforts to increase its legitimacy, Hara said, but its best strategy has been creating an alternative ideology through social institutions.

Peter Chalk of the RAND Corporation explained that “Indonesia, from the outset, always focused closely on counternarratives.  The big obstacle is actually getting [organizations] to put forth that message without it being seen as a mouthpiece for the government.”

“Indonesia has reacted to ISIL’s spreading influence more forcefully than the other organizations in its history,” Chalk said.

In 2002, a regional al-Qaida affiliate set off bombs on Bali, killing more than 200 people, mostly foreigners. The Indonesian government then instituted an Anti-Terrorism Act and created a Special Forces counterterrorism squad. Some critics saw the programs as unfairly anti-Islam and overtly pro-West.

In 2014, the Indonesian government officially “banned” ISIS throughout the nation.

“There’s a strong sense of jihadist solidarity amongst inmates that makes the penal system an ideal hub for terrorist recruitment,” Chalk said.