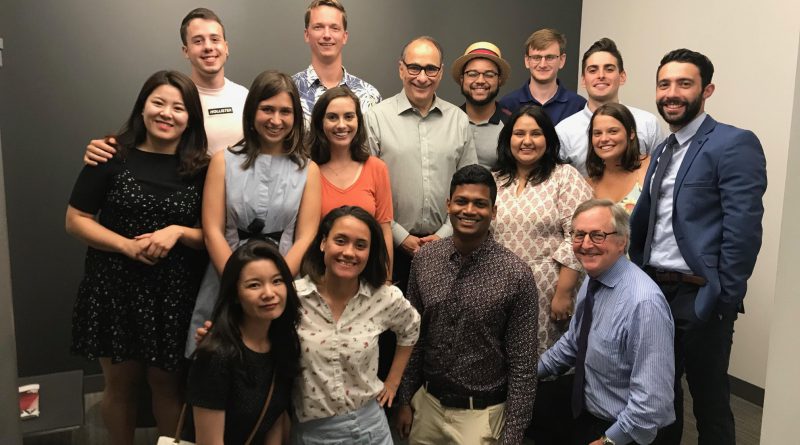 CHICAGO – Political strategist David Axelrod told a group of Medill School of Journalism graduate students recently that their skills are needed in the news business more than ever, declaring, “You are warriors for democracy.”

The former senior adviser to President Barack Obama made the comment in a meeting July 12 with 15 graduate students in the Politics, Policy and Foreign Affairs specialization, and he recounted his own path from a political reporter to senior White House advisor.

Axelrod devoted the majority of the hour-long meeting at his downtown office to questions about his early journalism career. “I think back on my time as a young reporter, and they were some of the best years of my life,” he said, noting that those years were formational for his future career as a political strategist and presidential adviser.

Axelrod stressed the importance of a free press in a democracy and the need to train young people in the important skills that are needed for the mission.

“I’m optimistic to see you guys,” he said, noting his big concern about journalism today is the decline of local news coverage and the troubling erosion of that “essential function of journalism.

“I don’t think I worry about national news organizations. They are OK. (President Donald) Trump has made the ‘failing New York Times’ a success now,” he quipped.

Referring to reporters who were sometimes hard on Obama when he was in the White House, he said, “I never doubted reporters had an honest mission and an important one in a free society.  It’s integral to a democracy. We need smart people going into the profession of journalism and a free press.”

Asked if he ever gets discouraged now as a media commentator and political consultant, given the bitter divisions in the electorate, he shook his head.

“I’m an optimist. I’m also a realist. I think there’s more at stake in this election than Democrats and Republicans, and I believe in democracy.”

Aishwarya Airy, a New Delhi native and a Medill MSJ student who attended the meeting, wrote later to the Medill administration that Axelrod’s words gave her “much needed hope and direction” regarding journalism.

“As an international student, I come with limited and external knowledge of the way the U.S. political systems work. I realize that […] working towards the development of an informed electorate and a responsible citizenry continue to be the core of good journalism.”

Earlier in the day, the Medill students toured Jackson Park with Tim Later, recently retired chief of staff to the Chicago Park District Board of Commissioners. Students got a firsthand look at the neighborhood where Obama hopes to build his presidential center and library.

With Later guiding the group, the Medill students walked the proposed site and discussed the community concerns, city actions and litigation surrounding the plans for construction of the Obama Presidential Center in the park on Chicago’s South Side.

“The Obama Presidential Center presents many policy choices in a single project – such as the preservation of historic open space versus economic development for a community in need of it,” Later said.

“There are benefits of that development, such as jobs, better shopping and higher property values, and there are downsides, such as higher rents and property taxes, or potential displacement of long-time residents,” he added.

Finally, the students learned there is a need for substantial public investment in infrastructure to support a private development of this nature and scope.

“All these issues make the OPC a good topic for Medill journalism students to consider,” Later said. “I enjoyed discussing them with such bright and engaged students.”