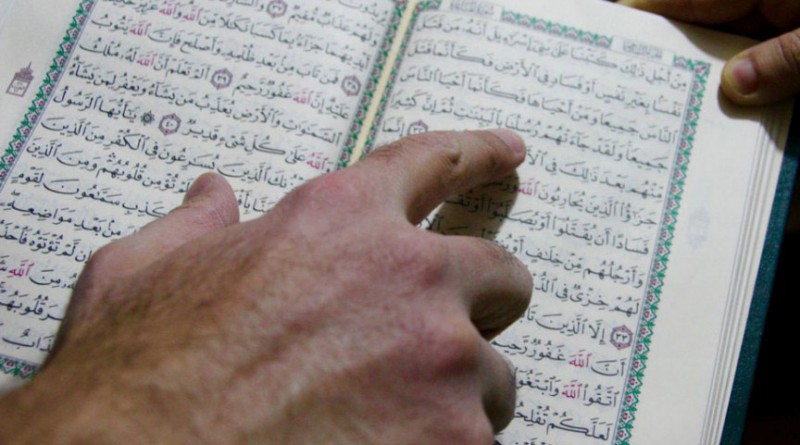 Pointing to a verse in the Qur’an that condemns violence, Firas explains that ISIS goes against the teachings of the religion. “They never represent Islam,” he said. Firas and Rehab don’t want photos taken that could identify them for fear of violence against family still in Syria. (Kat Lonsdorf/MEDILL)
Global Health and Migration
By Kat Lonsdorf on March 23, 2016April 2, 2016
Tweet

Sitting in a modest apartment in Chicago’s northern Rogers Park neighborhood, Firas Jawish, 35, thought back on the 10 months he spent detained underground by the Assad regime in Syria.

“We had no idea if it was day or night,” he recalled. “But usually the torture was in the mornings–so then we knew.”

He said it so matter-of-factly that it would have seemed like light conversation to a passerby.

The sparsely decorated apartment is the most reliable home Firas and his wife Rehab, 29, have had in more than three years. For their 3-year-old son, Hasan, it’s the first permanent place he’s ever lived.

The young family moved to Chicago in late September, joining the more than 150 Syrian refugees that have resettled in Illinois since the start of the Syrian civil war in March 2011.

Before the war began—or at least before it came to them—the newly married couple lived near Damascus in the northern suburb of Harasta. Firas was an anesthesiologist working in two different ICUs. Rehab, then pregnant, was going to school to become a textile mechanical engineer.

In 2012, as the unrest of the civil war began to spread, the Assad regime started weekly bombings in Harasta, forcing Firas and Rehab to leave their home and all their brand-new wedding gifts behind. They moved in with family in a nearby suburb, taking only belongings they could carry.

Meanwhile, Firas coped with the bombings the only way he knew how—by helping injured civilians in his neighborhood when he wasn’t working at the hospital. It was this that eventually led to his detainment.

“Even if someone is injured and goes to the regime hospital, they will kill him there, or he will just disappear forever,” Firas recounted last week in Rogers Park, explaining that the government considered anyone trying to alleviate the situation an enemy.

The couple didn’t want any identifiable photos taken for fear of the safety of family members still in Syria, but they did allow audio. Listen below to hear Firas describe his time in detention.

On the floor nearby, Hasan sat playing with a remote control car, oblivious to the dramatic tale unfolding in the living room.

When Firas was finally released in October 2013, he had been underground for 10 months. Hasan was now walking and talking, but he didn’t recognize his father.

A few days later, the couple decided to leave, fearing that Firas would again be arrested.

With little savings left, they sold their car and got on a bus to the northern city of Aleppo. From here, they took a bus to the Turkish border and then walked across, becoming part of the now 4.6 million Syrians who have fled the war-torn country.

They rented a room in Antakya, Turkey, a city about 20 miles from the Mediterranean Sea toward Cyprus. Rehab worked for a Danish refugee organization, while Firas tried to run a clinic for other refugees out of their cramped home using the only medical equipment he brought with him: his stethoscope.

Each stop on the Jawish family’s journey from Damascus to Chicago. (Kat Lonsdorf/MEDILL)

The family applied for refugee status with the United Nations High Commissioner for Refugees in early 2014.

“After a while they asked us, ‘Would you like to go to the United States?’” Firas smiled big remembering, laughing a little. “Well, yeah. Sure, of course. Who wouldn’t?”

The whole process took about two years. There was a medical check, and a security check. Many security checks, he said. “They don’t tell you anything about how to travel, or when to travel,” Firas remembered. “You’re just waiting.”

The family got 10-days notice that they would be moving to Chicago, a city Firas said he knew about from movies.

“But we didn’t know the weather,” he said. “No one told us that it’s very cold. And I didn’t hear about the Lake Michigan—it’s just like a sea, actually, but it’s a lake. It’s very beautiful.”

“Chicago is traditionally a welcoming hub for refugees from all over the world,” said Suzanne Akhras, executive director of the local aid organization Syrian Community Network. She referenced the resolution passed unanimously by Chicago’s aldermen in reaction against an attempted ban on refugees by Gov. Bruce Rauner late last year.

Ending up in the United States is not a typical outcome for Syrian refugees. The U.S. has only accepted 2,660 Syrian refugees since 2011, according to the most recent State Department numbers. That’s much less than one percent of the total number of Syrian refugees seeking relief from the conflict.

The number of Syrian refugees resettled in Chicago, Illinois, and the United States as a whole per year since the civil war began in 2011. (Kat Lonsdorf/MEDILL)

“It’s not sufficient,” Akhras said of the United States’ resettlement efforts. “Of course you can’t resettle everyone, we understand that, but why we’re not accepting more is beyond me.”

Instead, Congress introduced a bill late last year to make it harder for refugees from Syria and Iraq to come to the United States. The bill already passed in the House without amendment in November, after the deadly terrorist attacks in Paris left many U.S. lawmakers worried that ISIS was gearing up to infiltrate the country via an influx of Syrian refugees. It headed to the Senate this week for a vote.

President Obama has said he will veto the bill if it comes across his desk.

“This legislation would introduce unnecessary and impractical requirements that would unacceptably hamper our efforts to assist some of the most vulnerable people in the world,” he said in a statement shortly after the bill was introduced.

For Rehab especially, the transition to a new life has been lonely, mainly because of the language barrier. But Firas just accepted a new job in data entry at a nearby clinic, and the couple is especially looking forward to Hasan’s future in America.

“We really find that American people are very nice people, and open-minded,” Firas said. “A lot of American people here that we’ve met say, ‘We know you’ve been through very hard situations.’ We didn’t expect that.”