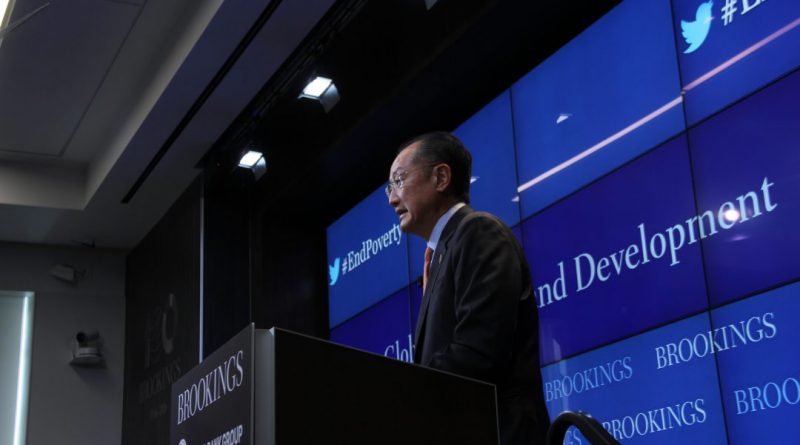 Kim said the World Bank needs to find more innovative ways to spur partnerships between the public and private sectors, giving the example of an airport built in Amman, Jordan, using public as well as private funds to create a more modern airport while also yielding high returns for investors.

The World Bank also can encourage financial institutions to invest in ventures such public works projects in developing countries by providing its expertise in risk assessment, Kim said. The organization can help the private sector to reduce risk and foster economic growth, especially in the world’s poorest countries.

One potential problem in promoting shared prosperity, according to Kim, is the increase in labor-saving technology and automation, which threatens many jobs in developing markets  In India and Bangladesh, 72 percent of jobs are at risk, while in Ethiopia the rate is above 80 percent.

Despite criticism from politicians and those who believe they lost jobs because of globalization, Kim warned that isolationism is the wrong course and instead promoted economic cooperation and strong partnerships to continue reducing those living in extreme global poverty.

Since 1990, a time of landmark international trade deals, more than 1 billion people have been lifted out of global inequality, Kim said.

Investing in human capital, such as education and universal health care, will help countries to prepare their populations to compete in an increasingly competitive and globalized workplace, he said.

“The need for human capital investment is even more important than in hard infrastructure.” \

Although these may be worrying times for free trade and globalization advocates, some in the crowd remained optimistic about long-term outlooks.

“It showed a lot of directions and a lot of thought and made me more optimistic about what the World Bank does,” said Jack Krupansky, a former software developer in the audience. “I especially appreciate the idea of public private projects and looking at projects that have return and if we can figure out how to finance them, then we have a lot of potential there.”