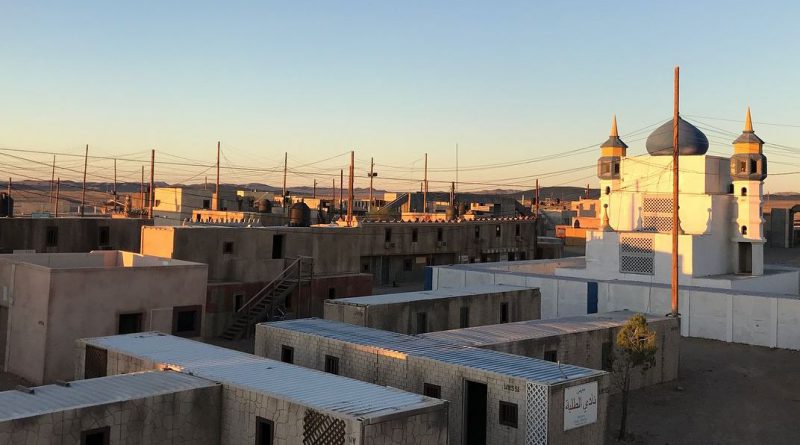 The sun rises in Ujen, a city built by the US Army for real-world combat scenarios. (Kevin Schmidt/MNS)
Conflicts and Terrorism
By Kevin Schmidt on November 27, 2017November 28, 2017 Fort Irwin, Kevin Schmidt, national security, US Army
Tweet

In the artificial city of Ujen, soldiers fight to overcome and defend more than 100 buildings and their inhabitants while facing humanitarian crises and the influx of refugees and migrants — all of this to replicate what Army strategists assume will be the challenges of future combat operations.

Ujen has the look of a Middle Eastern city: a town square, a youth center, shops, cafes, religious centers and gift shops. But it can also be repurposed as an Eastern European town for alternative training exercises.

As part of a recent two-week, brigade-level training session, American forces recaptured Ujen from enemy forces, but a counterattack from an insurgent group was in the works. Throughout the city, civilians went about their daily routines as the soldiers prepared for the counterattack.

Some of Ujen’s residents are professional actors who commute from Los Angeles and San Diego, portraying civilians of either Middle Eastern or Eastern European descent. Others include people who immigrated to the United States and pretend to live in the staged city during the scenario.

As realistic as these scenarios are, no civilians are actually hurt while role-playing because the troops use blanks, as well as laser lights to show when someone has been shot.