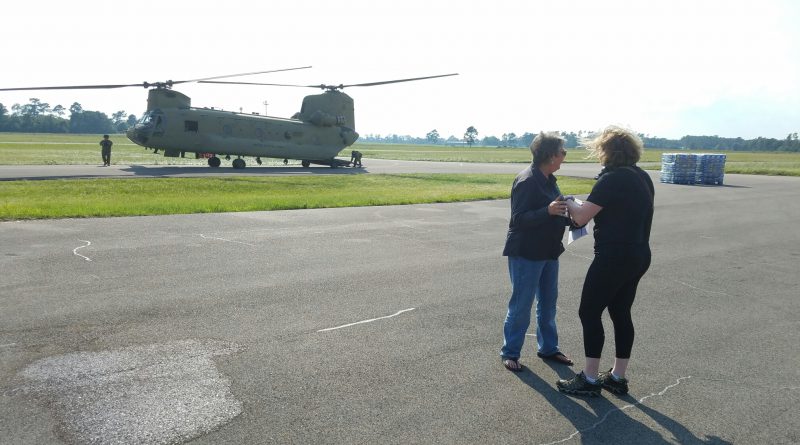 BROOKSHIRE, Texas – In the aftermath of Hurricane Harvey, when most people had been saved but cattle were still stranded, a crew of unlikely saviors from Michigan swung into action for one of the unusual missions this storm created with the extent of its flooding.

On a recent morning at 0900 hours, 14 soldiers in green camo piled into the back of a CH-47 Chinook, a tan, tandem-rotared helicopter that could be straight out of a movie about the Vietnam war–save for the iPad-esque screens scattered all around the upgraded cockpit. The soldiers sat in pull-down red benches, which lined the sides of the cargo bay of Muscle 13, a Michigan Army National Guard chopper.

The Michigan crew was already onboard, readying their girl for the flight. Maj. Jeremy Barnard and 1st Lt. Todd Osborne were in the cockpit, kitted out and running through their checklist. Sgt. Bobby Joe Spivey, Sgt. Steward Wenino and Pfc. Brad Whitt were running the back of the aircraft, ticking down their own checklists, and Pfc. Whitney Kann was strapped in, waiting for takeoff.

The 14 soldiers in the hold buckled themselves to the walls of the bay and prepared for a full day of throwing hay bales around, all the while cooking in the heat thrown off the Chinook engines that helped them land in the sunny parking lot of Hamshire-Fannett High School.

Meanwhile, the six who crewed Muscle 13 looked forward instead to hunting down and feeding stranded and starving cattle with those hay bales.

Without hay drops, cattle, some of whom have been without food for up to a week or more already, would die, further devastating ranchers and the Texas economy in Harvey’s wake.

The rule of thumb is half a bale a head per day. By the end of the day, Muscle 13 and its crew would have dropped approximately 500 bales of hay over the course of a little under seven hours, feeding about 1,000 head of cattle ranchers could not reach.

As Barnard and Osborne ticked down the pre-flight checklist in the glass-enclosed cockpit, Spivey dashed around the Chinook, making sure everything in the remaining 90 feet (large enough to carry a Humvee or a small plane in the hold) was as it should be. A flight engineer with the Guard, Spivey is a cheerful, upbeat presence who, in his own words, “likes smiles.”

The aircraft’s transmission, hydraulics, debris screen, filters and a list as long as your arm all fall under his purview, not to mention the task of helping the pilots land the Chinook in tricky spaces.

Everything and everyone had its place: belts were looped and put away, extra bags stowed in nets along the wall.

That Wednesday, everyone on board was treated to a routine, zone-out-and-you’ll-miss-it explanation of what to do and where to go in case of an emergency. Long story short: head for the back, but pay attention to crew members.

As the engines began to whine, everyone in the cargo bay popped their earplugs (“foamies”) in or threw headphones on. Once the blades began to spin, accelerating fast and pulling the Chinook into the sky, soldiers took their cell phones out of their pockets. More than a few took selfies or leaned into the bubble-shaped windows to take photos of the flooding still inundating parts of Houston below.

A few minutes after takeoff, Kann unhooked herself from the floor, where she was tethered, and headed straight for the back of the aircraft. Chinooks feature a ramp at the end of the cargo bay to allow for loading large items; it can fly with it open or closed. Wednesday, the ramp was lowered.

Kann, along with Whitt, clipped herself in and sat on the end of the ramp, dangling her feet over the edge. She took in the view from the end of the Chinook for nearly the entire journey to Hamshire, 45 minutes at 170 miles an hour.

After dropping the non-crew members at the high school’s parking lot, Muscle 13 loaded up with about 150 bales of hay and headed out for its first point. Approximately 10,000 head of cattle needed feeding, and this was Muscle 13’s second hay drop. The first of the week, conducted Monday, had also been the first any of them had ever done, but it was pretty easy to pick up.

And the jokes were their favorite part.

Heading to quadrant Charlie Charlie first –– a flight northeast of Hamshire, which included the outskirts of Beaumont –– the crew began to search for cattle. Once they found the cattle, it took a few seconds to determine if the head were trapped, and if so, if there was already hay in the area from the previous day’s hay drops.

Flying 200 feet above the ground, the pilot who wasn’t flying at the moment –– Osborne and Barnard switched controls back and forth –– scanned the horizon left to right, right to left for livestock. Barnard, who briefly worked on a dairy farm in his youth, was the most proficient at spotting the animals, which often hid among trees and bushes.

“You have to look for movement,” he said, pointing Barnard to a spot west of the chopper.  “Otherwise, it’s just a spot of brown.”

One hundred-fifty bales dropped off –– equating to 300 head of cattle fed –– and then the crew headed back to the high school and loaded up again, to head out to its next point.

Muscle 13 had been given coordinates that the crew was pretty sure made this a wild goose chase, considering that they translated to a fairly deep patch of ocean about a mile off the Texas coast, but they had to go check them out anyway. Or, at least the land equivalent of the grid. By the time they reached the land north of the coordinates, it became clear there were some head in the area, but the land around them had dried up; the cows’ ribs weren’t even visible.

After a few minutes, Osborne noted that they had made it all the way into Louisiana.

“Yup, wild goose chase,” said Barnard. If they didn’t do it, though, he explained, someone else would have to. If they’d had the original coordinates they’d have been able to figure out where they were supposed to check, but those didn’t make it along with their orders.

A few seconds later, Barnard spotted what he thought were some cows about a mile north. He ordered Osborne to wheel to the right. Osborne pulled the Chinook, dipping heavily to the right side and completed almost a 360 turn.

“No, do it again,” Barnard said, coaching Osborne through the turn.

The crew in the back, taken completely by surprise by both the turn and the speed (which felt like pulling 2.5 Gs), registered their complaints.

“Don’t do that again,” Wenino ordered. “We need to know back here.”

Osborne and Barnard were already heading for the next herd, not too far from one of the first dead cows of the day: a brown and white heifer so bloated she looked like an overstuffed child’s toy from the air.

As Osborne allowed the Chinook to hover about 10 feet over a hillock, where at least 20 head were trapped, Spivey poked his head out the uncovered windows cut in the body of the Chinook just behind the head of the helicopter.

“Roger, roger,” came from the cockpit.

Over the intercom came a question from the back end, where Whitt, Kann and Wenino were pushing bales out. Unable to see the cattle and horses, they relied upon Spivey, Barnard and Osborne to tell them how many they needed to drop. How many were needed this time?

As they hovered for two long minutes, the force of the whirring blades churned up the foul-smelling water, making waves in the water and a rainbow appear on both sides of the Chinook.

Around noon, the crew of Muscle 13 got orders to head back home; they were done with their aid mission in Texas and would report back to Michigan, just in time to report for their monthly weekend training.

Kann, the newest member of the crew, joined up Jan. 4, 2016. Even though she’s only been with the Guard a short while, she knows she wants to become full-time with them, and eventually become a flight engineer.

She was excited to go on this mission to Texas, thinking not just about the experience she was getting, but everything she was learning about the Chinook itself, and from the rest of the crew. Everything from tip to toe, she was intent on tucking away in her head.

While the ground Muscle 13 traveled Wednesday was much drier than it had been even on ,

Monday. There were still large swaths of land that looked like ranchers had built their farms on shallow lakes, fencing the water in just to keep their cattle wet and miserable. The cattle would sprint away when they saw the chopper approach –– those that could sprint, while those that were too far gone struggled to even get to their feet –– and then sprint for the food once they realized what had been dropped. It was simultaneously heartwarming and sad, but it’s a fact of life, for good or bad, Barnard noted.

While this was Kann’s first hay drop and the rest of the crew’s second, it was a far cry from the type of orders they’re used to.

The crew spent nine months in Afghanistan in 2016, which by all accounts were not the easiest. A previous Chinook of theirs was shot at in pre-flight mode and caught on fire.

“We were able to save everyone except a few Afghanis,” Spivey said soberly.

Compared to the time they spent in Afghanistan, the crew thought this kind of humanitarian –– and animal mission –– aid was a treat.

“It was really rewarding,” said Barnard. “It’s a good mission to do. Not just because we get a lot of flight time, but it’s good to help people who aren’t shooting at you. It’s a good twist of events for us, compared to what we normally have been getting overseas.”

It still had to come to an end.

Once the crew had hit six and a half or seven hours of flight time, they headed back for the high  school parking lot; they are allowed only 8 hours of flight time before they must stop for their mandatory minimum 12 hours off. After picking up the 14 soldiers they started the day with and clearing a little of the excess hay out of the back of the bay, the crew of Muscle 13 began the flight sequence and took off to the west, headed back to Brookshire.

The ride back to base was a bumpier than at the start of the day, drops of water clinging to the Chinook’s double blades making it harder for them to slice through the air. Houston was not visibly drier than it had been in the morning, but traffic was already backing up on Katy Freeway, and the six Guard members crewing the Chinook were headed home in the morning.