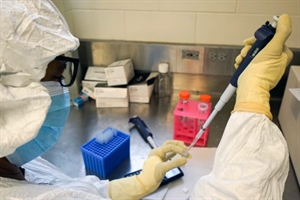 A team of Army researchers at the Walter Reed Army Institute of Research are developing a Zika vaccine that has induced a strong immune response in early trials. Army photo by Jonathan Thompson/WRAIR (Department of Defense)
Conflicts and Terrorism
By Gerald Harris on January 25, 2018 health
Tweet

WASHINGTON- Russia, Syria, North Korea and other U.S. adversaries are developing biological and chemical threats that could be delivered by missiles to target the United States, according to the White House.

This use of weaponry from hostile nations is raising the concern among bioterrisom experts and lawmakers of whether the U.S. is prepared to combat biothreats—as well as, naturally emerging outbreaks such as pandemic influenza, Ebola or SARS.

In the first National Security Strategy issued by the Trump administration in December 2017, the White House broadly outlined the need to combat biothreats and pandemics.

In the report, the Trump administrations outlined three priorities to defend against biological incidents that have the “potential to cause catastrophic loss of life.”

The plan is to “detect and contain biothreats at their source,” which involves working with other high-risk countries to reduce and prevent the spread of disease by “encouraging other countries to invest in basic health care systems and security.”

The administration also wanted to be prepared to support and defend advancements in biomedical innovation, and improve the U.S.  medical response to better identify outbreaks and implement plans to contain the spread of the disease.

“I think that our public health systems, and our hospital systems are not well prepared to handle a large-scale event, or an event that exceeds our usual parameters,” said Dr. Asha M. George, executive director of the Blue Ribbon Study Panel on Biodefense, a bipartisan think tank that offers comprehensive assessments of the state of U.S. biodefense efforts.

“As we saw with Ebola, we didn’t have that many patients,” said George. “But for even the few patients that we had in the United States we did not expect that the requirements for treating that disease would be so excessive.”

Kadlec warned that “the 21st century health security environment is increasingly complex and dangerous; it demands that we act with urgency and singular effort: to save lives and protect Americans.”

“ISIS and al-Qaeda remain determined to attack the United States, and ISIS has demonstrated no compunction about using chemical and other unconventional weapons in attacks overseas,” he said.

According to the State Department, the United States has assessed the risk of biological warfare threats from Iran, Iraq and Syria. Much of the world agreed not to use weapons of mass destruction by signing a multilateral agreement, the Biological Weapons Convention, in 1972.

“We’re in range of certain missiles from certain countries,” George said. “So biological warfare is still a real issue, and becoming more real as these other countries develop more capabilities.”

George also said that if a significant outbreak does happen resulting from warfare or an aggressive virus, Americans will have a role to play.

“Once our hospitals become over-run, or once we run out of resources, the publics not going to have anywhere to go to get the kind of resources that they will need,” said George. “If we implement certain quarantine measures, many of those plans require people to stay in place.”

While Kadlec said HHS and ASPR have made significant progress since the Pandemic and All-Hazards Preparedness Act which was enacted in 2006 and reauthorized in 2013, but there is still more that needs to be done.

Kadlec highlighted preparation as a means to thwart and control threats of health concerns to cause mass sickness.

“We have sufficient domestic vaccine manufacturing capacity to produce bulk vaccine for every American within six months,” Kaldec said. “However, we have exhausted the emergency supplemental funding balances at a time when we are now closely watching the H7N9 influenza virus circulating in China, and we are concerned with the ominous trends that we are seeing.”

One solution according to Kadlec is maintaining domestic manufacturing as well as “sustaining, testing, and strengthening the readiness of our medical and public health infrastructure” at the state and local levels.

Kadlec said that half of states scored five or lower out of 10 on health emergency preparedness, and  levels of readiness varied significantly across the country.

“From the healthcare perspective, our public health systems have grown really weak from lack of funding and lack of emphasis, by congress and governors,” said George.

The reason for that according to George, is because the United States benefits from really high levels of health.

“With limited dollars, there is a tendency to say we don’t need public health that much we’ll just put our money elsewhere into things that are more urgent,” said George. “But the disadvantage in doing that is that if we were to have a biological event that was really significant that killed many people than this public health system that we depend on just wouldn’t be there, it wouldn’t be strong.”