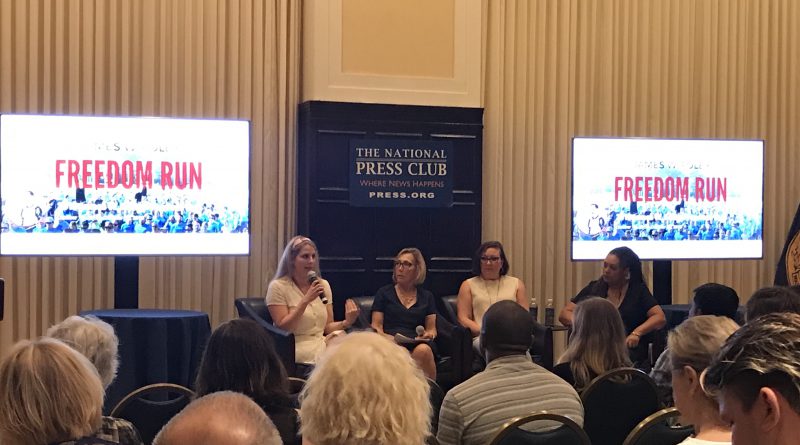 WASHINGTON, DC – Journalists need to be aware of the dangers they face, from covering a protest or political rally to covering an armed conflict, but the U.S. government also should be more proactive in helping to bring them home if they are taken hostage, representatives of the James W. Foley Legacy Foundation said at an October 1 screening of the HBO documentary film “Jim: The James Foley Story.”

At the event organized by the National Press Club, The James Foley Foundation’s Executive Director, Margaux Ewen, talked about how the tragic experience of the Foley family and their advocacy for hostage freedom has led to changes in U.S. hostage policy.

Ewen said that despite improvements, “we have to keep up the pressure on the government” because there are many Americans, like Austin Tice, a journalist detained in Syria since 2012, who still need to come home.

James Foley was kidnapped and held hostage by ISIS in Syria for two years before he was eventually murdered in August 2014. The Foley family and close friends of Jim’s then created the James W. Foley Legacy Foundation to advocate for the freedom of all Americans held hostage and unjustly detained abroad and promote the safety of journalists worldwide.

To honor Foley’s legacy of moral courage and support its mission, the foundation has been organizing the annual James W. Foley Freedom Run since 2014. This year’s 5K Run/Walk will take place in Rochester, New Hampshire, on October 19 and in Washington, DC, on October 20, as well as virtually worldwide. The National Press Club, which is one of several participating organizations, organized the October 1 screening and discussion to raise awareness about the Freedom Run and the foundation’s mission.

Ellen Shearer, a professor at the Medill School of Journalism at Northwestern University and a member of the James Foley Foundation’s board, said the foundation decided to partner with Medill, where James earned a master’s degree in journalism, by developing the James W. Foley Journalist Safety Guide.

The Safety Guide is a curriculum that includes practical tools for journalists to prepare for potential danger locally and abroad. It is available for free on the foundation’s website and provides safety checklists, risk assessments, and online safety training. An undergraduate version of this curriculum will be piloted at Marquette University’s Diederich College of Communications this fall with the goal of integrating these resources into journalism and communications schools across the United States.

“Journalists now more than ever need to be thinking about their safety no matter what they are covering,” said Shearer.

During the documentary screening, audience members often cried as scenes of loneliness, fear and torture were discussed by those held in captivity with Foley, who were eventually released.

“There is truly a legacy that Jim has left,” said Courtney Radsch, Advocacy Director for the Committee to Protect Journalists. The legacy “is this idea that we have to think about safety and security as we are thinking about press freedom.”

Audience members who were journalists who covered conflicts themselves were especially impacted.

“I think it is a really powerful story,” said Maria Michela D’Alessandro, an international freelance journalist who has covered Crimea, and at times felt uncertain about her profession. Jim’s story “did not put me down but gave me the strength to continue.”

More information about the 2019 James W. Foley Freedom Run, including how to register, can be found at www.foleyrun.org.