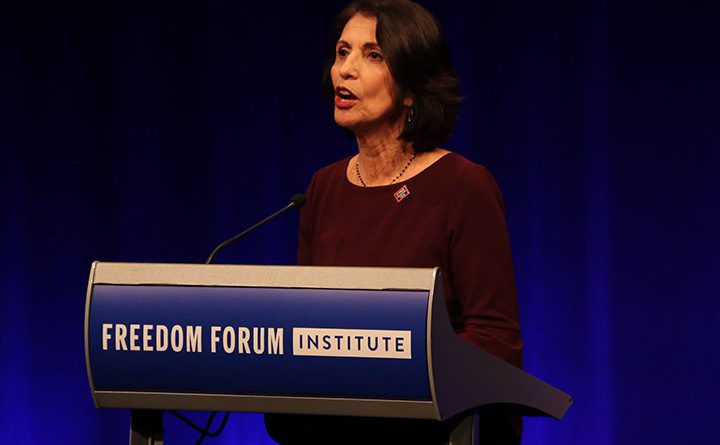 Diane Foley speaks at an event at the Newseum in Washington, D.C.
Conflicts and Terrorism
By Patty Nieberg on January 27, 2019 conflict journalism, Syria
Tweet

WASHINGTON – The U.S. government has improved its practices in helping families when a family member is taken hostage, due in large part to prodding by James W. Foley Legacy Foundation President Diane Foley, but the “no ransom” policy should be changed, according to experts at a Jan. 24 panel at the Newseum.

Foley, mother of murdered conflict journalist James Foley, opened the event by sharing  her interactions with the U.S. government after her son was kidnapped, held hostage and eventually killed by ISIS in Syria in 2014. At the time, Foley said, she was told that James was the government’s “highest priority,” but there were no negotiations ever considered between the kidnappers and American government. She was also told that she would be prosecuted if the family raised ransom money on its own.

“We were just left to be ourselves,” Foley said. “I was left feeling so abandoned by our government, truly.”

Since James. Death, Foley has advocated for journalists’ safety and more coordination between hostage families and the government.

Joel Simon, author of the book “We Want to Negotiate” and head of the Committee to Protect Journalists, and David Rhode, a journalist kidnapped by the Taliban in 2009, joined moderator Judy Woodruff, anchor for PBS Newshour, to talk about the effectiveness of the U.S. policy to never negotiate or pay ransom to terrorists who have Americans as hostages.

He also explained that the no-ransom policy applies only to kidnappings by terrorists; the government will not prosecute families or others for paying criminal groups for the safe return of Americans. And the government also will negotiate if the Americans being held are considered prisoners of war, such as Army private Bowe Bergdahl, who captured in Afghanistan by the Haqqani network and released five years later in exchange for Guantánamo Bay prisoners.

Although the U.S. forbids negotiations, other countries do negotiate and pay ransom for the return of their citizens. The success rate of hostage return for France is 100 percent, Spain is 75 percent and the U.S. is about 25 percent, Simon said.

According to his research, there’s no evidence that paying ransoms by a country will increased the number of hostage-takings of citizens of that country. Instead, Simon called the policy a “perverse game theory” that further endangers journalists.

“The thing that keeps hostages alive is their perceived value,” he said. “Not paying ransom in a conflict is like trying to wipe out a car bombing by banning some gasoline. It’s impossible to eliminate.”

The Trump administration has successfully negotiated the release of Americans detained in North Korea, Turkey and Egypt, but negotiating with other countries is much different and a “transactional nature to it” compared with negotiating with terrorists, Simon said.

Rhode reminded members of the Newseum audience that there are hundreds of Americans, including many journalists, being detained whose cases don’t get attention. He said it’s important to keep pressure on government and that news organizations should have steady, continuous coverage of those held hostage.

Foley said more can be done to try to ensure the safe return of Americans unjustly held abroad.

“As Americans we can do better. We can be shrewder,” Foley said. “We can learn about people who want to capture our citizens. We can learn about why they’re taking us and who they are. And that is partly why we started the James Foley Legacy Foundation.”