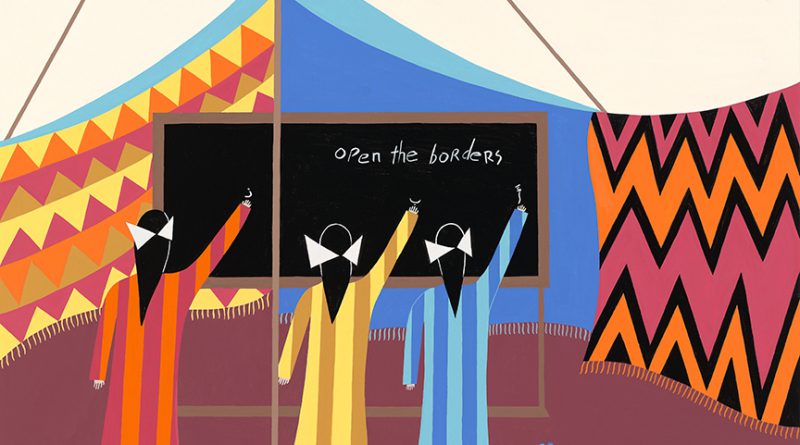 WASHINGTON — Three Syrian girls, each with a white ribbon atop her head, stand facing a blackboard with chalk in hand. Three words are on the chalkboard: “Open the borders.”

This painted portrayal is intended to show that “in the midst of everything, retaining the beauty, the color and the dignity of the people is paramount to me,” said Lebanese-American painter Helen Zughaib of the painted ribbons.

A new exhibit of her artwork at the President Woodrow Wilson House in Washington, D.C., provides a window into the lives of Syrian women and children forced to flee their homeland. In a series of 25 paintings and two installations, Zughaib walks viewers through the conflict in which an estimated 570,000 Syrians have been killed and more than 13 million displaced since the civil war erupted in 2011.

In 1919, the Allied powers at the Paris Peace Conference etched the borders of Syria onto the global map. A century later, the country remains mired in violence and fractured by competing political forces, including President Bashar al-Assad’s regime, Kurdish forces and the Islamic State terrorist group.

RELATED Religion in the classroom: Where the faithful and the ACLU can agree
“The victims are many times women and children who are paying the price for what is happening around them,” Zughaib said, adding that she found inspiration for her series in African-American painter Jacob Lawrence.

Most countries bordering Syria, including Turkey, Lebanon and Jordan, have shut their borders to Syrians in most circumstances as part of an effort to limit the flow of refugees.

“The borders are closed,” said Wendy Pearlman, professor of political science at Northwestern University. “These people now are just left to die under bombs.”

The exhibition runs until July 28.