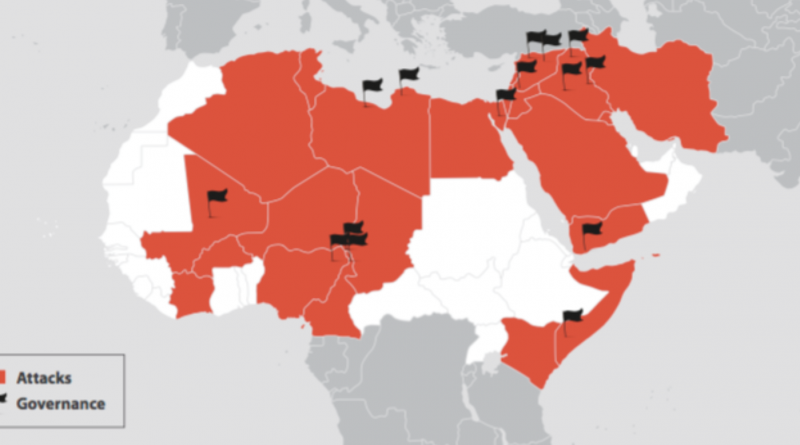 A MAP SHOWING EXTREMIST ATTACKS AND GOVERNANCE IN THE MIDDLE EAST, SAHEL AND HORN OF AFRICA REGIONS FROM 2013-18. (TASK FORCE ON EXTREMISM IN FRAGILE STATES)
Conflicts and Terrorism
By Brooke Fowler on February 28, 2019 foreign policy
Tweet

WASHINGTON — Members of the Task Force to End Extremism in Fragile States met with Democratic and Republican lawmakers on Tuesday to share the latest report on preventing extremism abroad.

“You cannot kill your way into winning this battle against extremism,” said Republican Sen. Lindsey Graham of South Carolina during opening remarks.

Compiled by the United States Institute of Peace, an independent commission founded by Congress to promote conflict resolution and prevention, the new report focuses on threats in the Sahel, Horn of Africa and the Near East. It argues that ending extremism in fragile states will increase foreign prosperity and avoid costly U.S. intervention.

“Frankly, our efforts right now are disjointed and fractured across the government,” said Democratic Rep. Eliot Engle, Chairman of the House of Foreign Affairs Committee.

Acknowledging the limitations of the Department of Defense, Graham expects a favorable reaction from President Trump, as the new prevention plan is expected to be more cost effective than previous terrorism elimination efforts.

“We have to sell President Trump on this,” said Graham. “It has to be a win-win in his eyes. We have to make a business case.”

Cleansed of extremism, Graham is confident these states will become “our customers and friends.”

In its new approach, the Task Force recommends the United States engage in three critical factors. They include the establishment of a government framework, launching a Strategic Prevention Initiative, and coordination with the global community.

“You have a chance in Africa, Mr. President,” Graham said. “A little bit of money now can prevent U.S. engagement in Africa like what happened in the Middle East.”

Members of Congress plan to re-introduce the Global Fragility and Violence Reduction Act, which passed in the House last year, in the House and Senate in the coming weeks. This act would implement prevention tactics outlined in the Task Force report.

Focused on the United States’ role in preventing extremism, the report highlighted U.S. vulnerability to terrorism, necessity of infrastructure in fragile states, and the elimination of expensive U.S. intervention.

“Bullets and bombs alone cannot defeat an ideology. We need to combat it at its core,” said Rep. Michael McCaul, ranking member of the House Foreign Affairs Committee.

Thomas Kean, former New Jersey governor and co-chairman of the Task Force, also stressed the role of prevention in defense strategies. Kean said there will be successes and failures but sticking with fragile states for the long term will be the key to peace and security.

“If we pull this off, it’s a completely different way of combating the war on terrorism,” said Graham.