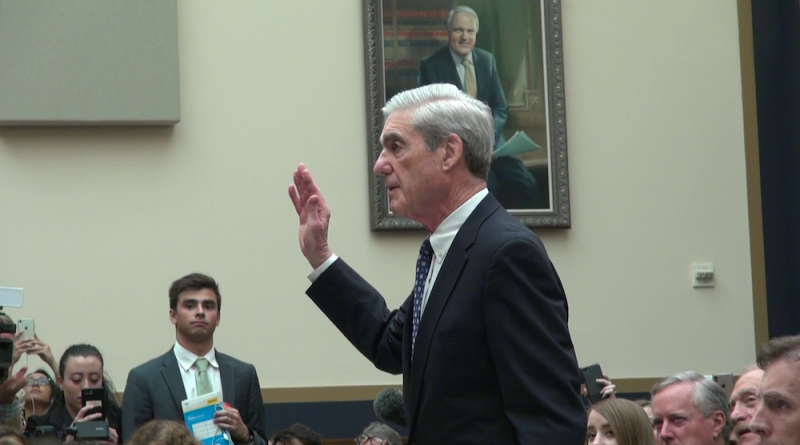 WASHINGTON — Former Special Counsel Robert S. Mueller III told two House committees Wednesday in 7 hours of testimony that his office’s investigation into Russian interference in the 2016 presidential election “is not a witch hunt.”

Calling Russia’s interference in the election “an invasion,” Rep. Jackie Speier, D-Calif.,  asked Mueller if he agreed interference was not a hoax during the afternoon hearing before the House Intelligence Committee.

“Absolutely, it was not a hoax,” Mueller replied, “I think we have underplayed to a certain extent that aspect of our investigation that has and would have long-term damage to the United States that we need to move quickly to address.”

Mueller said that Russians made repeated attempts at interference in the 2016 election.”They are doing it as we sit here. And they expect to do it during the next campaign,” he told Republican Republican Rep. Will Hurd of Texas, “many more countries are developing the capability to replicate what the Russians have done.”

House Democrats hoped the hearings would bring the special counsel’s 448-page redacted report released earlier this year to life for the American people as they repeatedly said, “Nobody is above the law.”

House Republicans wanted to close a chapter. “The American people have moved on. It’s time for Congress to stop wasting their time & get back to work!” Republican Rep. Tom Rice of South Carolina tweeted.

Mueller confirmed Russia committed computer crimes in 2016 to help then-candidate Donald Trump. When asked who benefited from Russia’s use of social media platforms to meddle in the 2016 election candidate Hillary Clinton or Donald Trump, Mueller said Trump did but there were instances where Clinton also benefited.

When it comes to determining whether or not Russian meddling changed votes Mueller told Rep. Greg Steube, R-Fla., it was outside of his scope to determine.

Mueller said no obstruction charges were brought against Trump because the special counsel’s office did not reach a determination as to whether the president committed a crime. When asked by Rep. Mucarsel-Powell,  D-Fla., if attempting to obstruct justice can be a crime, Mueller answered, “Yes.”

When Speier gave Mueller the floor to sum the written report up to the American people, Mueller called it a “living message.”

Thursday night Trump said the hearings were a “disaster for Robert Mueller & the Democrats” on Twitter. “Nevertheless, the Fake News Media will try to make the best of it!” he said.

The House Judiciary and Intelligence Committees had subpoenaed Mueller to testify.