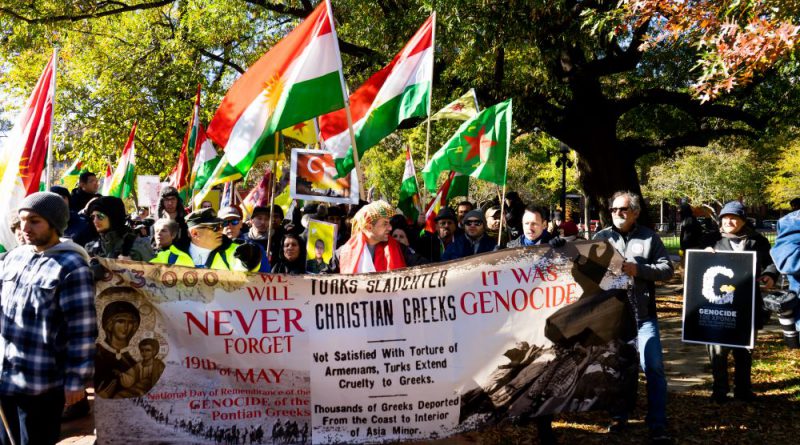 Gathered in Layette Square across the street from the White House, advocates for Kurdish, Armenian and Greek interests marched and chanted “Stop Turkish Invasion, “Shame on Trump” and “Long live YPG,” referring to the Syrian Kurdish forces who helped rid Northern Syria of ISIS.

Sam Humiston, who said he had recently come back from Syria after volunteering with the Syrian Democratic Forces, said that “Turkey is looking at Syria with a renewed Ottoman mindset. Turkey has always had an issue with politicized Kurdish-ness.”

In May 2017, on a visit to the U.S., Erdogan’s security detail attacked protesters who were advocating for Kurdish interests in Washington near the Turkish ambassador’s residence. The attack provoked outrage from the Kurdish community. Before the protest on Wednesday, Rep. Dan Crenshaw, R-Texas, wrote a letter to the State Department and the D.C. Metropolitan Police Department that was co-signed by 40 congressmen asking the two agencies to protect the rights of people to protest against Erdogan’s visit.

“While Erdogan has rejected these freedoms in Turkey, he and his security detail must abide by them here.” Crenshaw said. “His ability to act as an authoritarian ruler ends when he sets foot on American soil.”

The actions of Erdogan’s security detail in 2017 influenced a number of Wednesday’s protesters to attend the rally. Zhyar Abdul, a Kurdish-American, said that “80% of why I’m here today.”

There was a strong police presence at the protest. A Turkish man confronted protesters at the entrance to the park, but police arrived quickly to defuse the situation.

The Armenian National Committee of America was also present at the protest. Emil Sanamyan, an Armenian-American, said that the assault on the protesters in 2017 by Erdogan’s security detail motivated him to attend the event. Sanamyan said he also there to protest Trump’s foreign policy decisions.