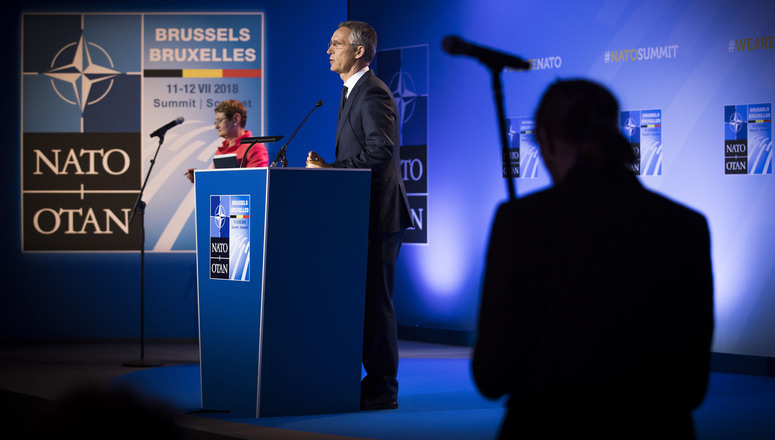 Press conference by NATO Secretary General Jens Stoltenberg after the meeting of the North Atlantic Council at the level of Heads of State and Government
International Relations
By Bryan Wood on February 4, 2019 NATO, russia
Tweet

WASHINGTON – When the NATO defense ministers meet in Brussels in two weeks, a top agenda item will be how to prepare thousands of military personnel to be deployed to Eastern Europe in 2020 in case of a crisis with Russia, a goal that could strain militaries in some of the smaller NATO allies, a top defense expert says.

The NATO Readiness Initiative, or NATOs “four 30s” plan, commits to prepare 30 mechanized battalions, 30 air squadrons and 30 combat vessels to be launched within a 30-day period next year; it was conceived at a 2016 summit at which defense ministers decided to increase the number of military personnel stationed in the Black Sea region as means of deterring Russian aggression. It was prompted, in part, by Russia’s annexation of Crimea in 2014.

In 2013, Russian President Vladimir Putin attempted to persuade “near abroad” countries like Armenia and Georgia, which were once a part of the Soviet Union, to join its new Eurasian Union over association agreements with the European Union. Armenia halted negotiations with the EU, but Georgia continued the process.

“The goal is to deter a war rather than fight a war,” said former Commander of the United States European Command, Gen. Philip Breedlove. “If NATO decreases deterrence, it increases the likelihood of belligerent action from Russia like we’ve seen with Crimea.”

Jim Townsend, a former deputy assistant secretary of defense for European and NATO policy, said that it would take most NATO countries several years to recruit and train enough troops to meet the 2020 goal. He pointed specifically to smaller NATO nations, like Latvia, Lithuania and Poland.

“Some countries, like Britain and France. could launch a military operation of this scale today if they needed,” said Townsend. “But, it’s going to a take a number of years for some of the other countries to be ready.”

A single squadron can have between 12 to 24 aircraft, while a battalion consists of 300 to 800 soldiers and a combat ship requires about 40 officers and enlisted.

Despite the difficulties in meeting the deployment goals, NATO still intends to deploy its defense plan. The NATO Defense Ministers meet on Feb. 14, and new details may be revealed.

“This is not about new forces, but about increasing the readiness of the forces our nations already have,” stated an unnamed NATO official. “Work on the initiative is underway.”

The “four 30s” plan is just one of several proposals designed to deter Putin from invasion by bolstering NATO presence nearby.

“The Alliance must be able to address the full spectrum of current and future challenges and threats from any direction, simultaneously,” NATO posted online in October 2018. “It is therefore strengthening its deterrence and defense posture in view of the changed and evolving security environment.”