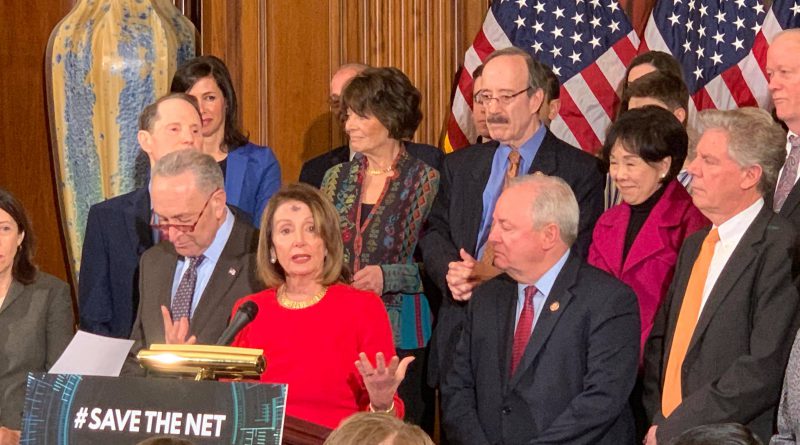 Democrats unveiled legislation on Wednesday to reinstitute net neutrality rules that were scrapped in 2017 by the Trump administration.

The bill, called the “Save the Internet Act,” would bring back rules that prevented internet providers from slowing down or blocking traffic from certain websites, or offering so-called paid “fast lanes.” Providers like Comcast, AT&T, and Verizon had pushed for the repeal of the rule.

Democrats have said this is a bill that will be welcomed by voters.

“Saving the internet has been a grassroots effort if there ever was one,” said Senate Minority Leader Chuck Schumer.

In December 2017, the Federal Communications Commission repealed the rule in a party-line decision, 3-2. Since then, internet providers say they have not introduced a single policy that would change Americans’ internet access. However, Democrats spoke urgently about the issue in a press conference on Wednesday.

Democrats repeatedly framed the issue as a crisis of inequality.

“It’s got to be open and free and fair and give the average person a break,” Schumer said. Three Republicans joined Democrats to vote in favor of a motion repealing the rules in the Senate in May 2018. However, the bill stalled in the Republican-controlled House.

Were the bill to pass both chambers, President Trump could have the opportunity to issue the first veto of his presidency. Democrats appear undeterred by that possibility.

“We are on the right side of history,” said Sen. Ed Markey of Massachusetts.

Internet freedom has been a hot topic recently, with Trump promising to issue an executive order to protect free speech online last weekend in his speech to CPAC. Many conservative activists at the conference were concerned about tech companies discriminating against conservative viewpoints online.

Hearings on the net neutrality legislation will begin next week in the House Energy and Commerce Committee.

Sen. Maria Cantwell, D-Wash., said it may be an uphill battle to start the process in the Senate Commerce Committee.

“I think our best advocates thus far — [Lisa] Murkowski [of Alaska], [John] Kennedy [of Louisiana] and [Susan] Collins [of Maine] — aren’t on the committee but we’ll look for opportunities there too,” Cantwell said.

Those three Republican senators voted for the motion to reinstate the rules in 2018.