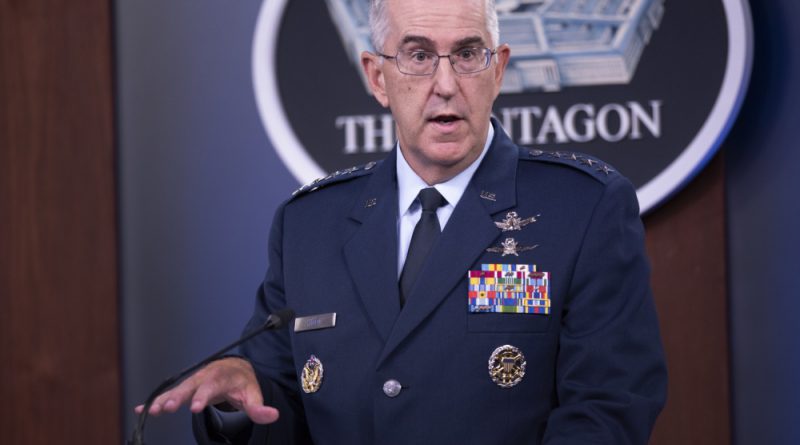 Members of the armed forces want to talk about racial injustice and civil unrest, and the Pentagon is encouraging them to “tell us exactly what’s bothering them” to reduce tension and keep morale positive, the vice chairman of the Joint Chiefs of Staff said Wednesday.

“There was significant stress in the 1980s. There was the Cold War, we had racial challenges still in the force, and that carried on for a long time,” he said. “Leadership said, ‘We’re going to eliminate this from the force,’ and we started down that path, but the force itself never really talked about it.”

Today, service members are open to discussing topics that are causing tension in the force, such as racism, Hyten said.

“If we go out and grab a bunch of soldiers or sailors or Marines, the cool part is that they’ll tell us exactly what is bugging them,” he said.

Hyten’s comments are in line with recent statements from Air Force and Army leaders promoting open dialogue within the military about current events.

The Air Force released a list of materials to help airmen discuss race and inclusion last month. And Army Chief of Staff Gen. James McConville encouraged soldiers to talk about their personal experiences at a Center for Strategic and International Studies talk July 31.

“I think it’s healthy that people will tell us exactly what’s bothering them,” Hyten said.”There’s stress on the force, there’s no doubt about it. But the morale is still positive.”

Talking about national defense strategy, Hyten said he has been working on a new joint, all-domain command-and-control strategy that would move away from specific areas of operations for each service.

“In the future, there will be no lines on the battlefield,” he said. “Which means [the] Army can, on its own platform, defend itself or strike deep. Marines can defend themselves or strike deep.”

That future strategy will work to centralize control and planning across all branches, and then allow for execution of plans to happen independently within each branch, he added.

Hyten said the U.S. also must collaborate more closely with allies to face global adversaries. Part of that collaboration involves moving troops out of Germany and better fortifying NATO partners closer to Russia, he said.

“When the president talked about restricting in Germany, that accelerated our decision timeline,” he explained. “But we were already going down that path.”

When Hyten joined the military in 1981, Germany was the boundary for NATO to stop Soviet aggression, but the boundary with Russia is now on the Baltic and Black Sea coastlines, he said.