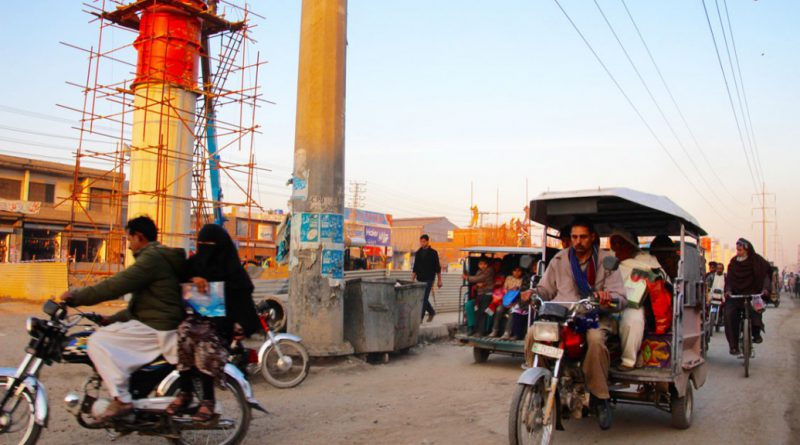 Building the elevated train line has meant demolishing thousands of private properties and encroaching on several historic landmarks in Lahore. It’s also throwing a wrench in a chaotic—yet familiar—public transportation system that relies on donkey carts to buses and everything in between. (MEDILL / Kat Lonsdorf)
International Relations
By Ellen Shearer on May 17, 2016May 18, 2016 Medill students, Pakistan
Tweet

In February, eight graduate journalism students traveled with Medill Professor Craig Duff to Pakistan to work alongside professional reporters at some of the country’s top newspapers, magazines and television news channels. Six of the students on the week-long trip have been specializing in national security at Medill, including Meggie Morris and Marisa Endicott, who reported for Newsweek Pakistan. Three other print journalists, including Steven Porter, worked at The Express Tribune, a leading English-language newspaper in the country (and the Pakistan partner for the International New York Times). National Security specialists in video included Kat Lonsdorf and Patrick Martin, whose work was broadcast on City42, one of Lahore’s top news stations, and Michael Bacos, who produced a news story with the national Express TV News.

The trip was part of a larger project in which the Medill School of Journalism has partnered with the International Center for Journalists (ICFJ) and the Institute of Business Administration (IBA) in Karachi to develop better training for journalists in Pakistan. It was funded by a grant from the U.S. Embassy in Islamabad. NSJI’s Director of Education and Outreach Josh Meyer was on the trip, and training Pakistani journalists in investigative reporting as part of the CEJ. Meyer also served as the Medill advisory board member for the project.

Steven Porter published a story on gun culture in the Express Tribune.

Though their stories were broadcast — in Urdu — on the air (and aren’t available on the web), Kat Lonsdorf, Patrick Martin and Mike Bacos all made English versions of their pieces on Medill Reports.

Kat created a social media style version of her story about Qinqui rickshaws in Lahore.

Patrick reported on school security in the wake of various school attacks in Pakistan.

And Mike Bacos looked into a growing interest in Mixed Martial Arts in Lahore, promoted by a Pakistani-American veteran of the U.S. Army and now a champion MMA fighter.