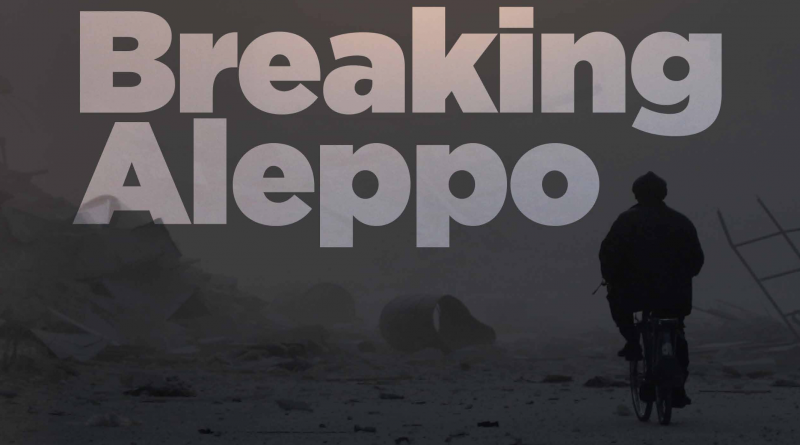 The Atlantic Council last week released a report titled, “Breaking Aleppo,” which details the tactics and strategy employed by the Assad regime and Russia in last year’s assault on Aleppo by using satellite imagery and other technology to verify and analyze open-source material from Syria’s largest city.

Report authors hope not only to establish a factual narrative in the face of denials of wrongdoing by Syria and Russia, but also that their findings can be used in legal proceedings in the future. Syrian government forces are largely responsible for atrocities in the country that date back to 2011, when Bashar al-Assad’s regime responded to a popular uprising with violence. Russia directly intervened on behalf of Assad in 2015.

“It’s one thing to raise awareness [about atrocities] through the media, but what we really want it legal accountability,” said Eliot Higgins, a nonresident senior fellow at the Atlantic Council’s Digital Forensic Research Lab. “This could be through civil cases or through mechanisms like the International Criminal Court.”

Higgins, of Leicester, U.K., is a pioneer in the field of digital forensic research. He first used Google Maps satellite imagery to verify that videos emerging from Arab Spring countries in 2011 were “actually filmed the way it’s claimed to be filmed.”

He started a blog in 2012, writing about a phone-hacking scandal in the U.K. and weapons used in Syria. His work gained traction in 2013, when he used photos of munitions used in the August 21, 2013 sarin gas attack on Ghouta, Syria, to establish the Syrian regime’s responsibility in an assessment more detailed than the U.S. government’s report.

He later founded Bellingcat, an investigative firm that analyzes open-source content from incidents such as the 2014 downing of the MH17 aircraft in Ukraine to the movements of Mexican drug cartels.

In the “Breaking Aleppo” report, Higgins and a team of researchers used publicly available material to prove the Assad regime coalition bombed hospitals and used incendiary and chemical weapons and banned cluster munitions to “break” Aleppo.

The report cites blanket, sometimes contradictory, denials of these acts by Syrian and Russian officials, a “pernicious misinformation campaign” that made “truth entirely subjective, such that one party’s lie became just as good as another’s fact.” The authors hope their research will block attempts to distort the truth in potential future court proceedings.

“If [Assad] is up in front of the International Criminal Court and tries to call it fake news, then he’s going to be in a lot of trouble,” Higgins said.

The report includes a case study of a hospital in east Aleppo known as M2, which was reportedly attacked at least 12 times between June and December 2016. Using satellite images of the surrounding area, footage from CCTV cameras inside the hospital, and images and photos published online by journalists in Aleppo, “it is possible to confirm that many of those attacks occurred,” the report finds. “Damage to structures around the hospital is consistent with attacks from above and would strongly indicate the use of air-dropped bombs and artillery, in line with reports from the hospital.”

Forensic Architecture, an independent research agency at Goldsmiths University of London, reconstructed the bombings of the M2 hospital using open-source intel for the “Breaking Aleppo” report.

“We should be able to take the witness statements that Human Rights Watch has collected and combine that with the data we’ve collected and analyzed, and that should all be brought together and presented as making a case of what happened around various incidents,” he said.

Researchers are not yet sure how their work will impact U.S. policy toward Syria, where at least 400,000 people have been killed in the last six years, according to human rights monitors.

“[The Trump administration] will not do anything unless they’re convinced it serves their geostrategic aims, mainly Iran and the problem with Sunni terrorism—these are the things they’re obsessed with,” said Faysal Itani, senior fellow at the Atlantic Council’s Rafik Hariri Center for the Middle East, who worked on the report. “We cannot go to them with the atrocities equation, because these guys don’t care.”

There are few people currently working in the time-consuming digital forensics research field, said Higgins, but his firm is training others in hopes that the method will be used in broader contexts. Bellingcat is currently using public records to investigate financial corruption in the U.K. and will soon launch a project focused on Latin America.

It’s not yet clear how exactly the research findings can be used in criminal proceedings, Higgins said, citing chain-of-custody concerns about information found only on the internet. He hopes these questions will be answered in the next year.