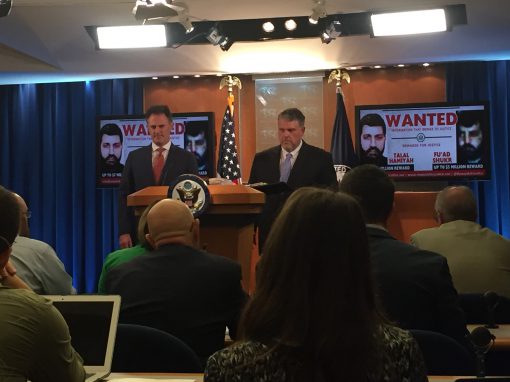 WASHINGTON — The U.S. government is offering multi-million dollar rewards for information that leads to the capture of two of the most wanted terrorist members in Hezbollah, State Department and National Counterterrorism Center officials announced Tuesday.

The two men, Fu’ad Shukr and Talal Hamiyah, have been linked to several terrorist attacks around the world over the past 30 years. Hamiyah’s alleged crimes include playing a role in hijackings and kidnappings targeting U.S. citizens. Shukr, a senior Hezbollah military commander, allegedly played a role in planning the 1983 attack on the U.S. Marine Corps barracks in Beirut, which killed 241 U.S. service members . The rewards for Shukr and Hamiyah are $5 and $7 million respectively.

State Department Counterterrorism Coordinator and Ambassador Nathan A. Sales and National Counterterrorism Director Nicholas J. Rasmussen said the reward offers are the first of their kind in 10 years.

The Council on Foreign Relations defines Hezbollah as a Shiite Muslim political party and militant group. But the United States and the European Union consider it a terrorist organization.

Before Sept. 11, Hezbollah was responsible for more deaths of Americans than any other foreign organization, Rasmussen said.

“This is an organization that relies on terrorism and violence to obtain its goals,” said Rasmussen.

While there is not an imminent, specific threat, Rasmussen said the NCTC is “watching very closely for signs.”

Sales called on the Lebanese government to recognize Hezbollah as a terrorist organization, and faulted Iran for its alleged role in assisting Hezbollah, saying the State Department believes that the Iranian government has played a financial role in building up Hezbollah’s capabilities.

“The Iranian regime has bankrolled Hezbollah at the expense of the Iranian people,” he said.

Sales applauded allies that  have taken steps in combating Hezbollah by enforcing sanctions and encouraged other countries who haven’t to join the fight.

“We have been very clear for all of our partners to condemn terrorism in all its forms,” Sales said. “Hezbollah is a terrorist organization from A to Z.”