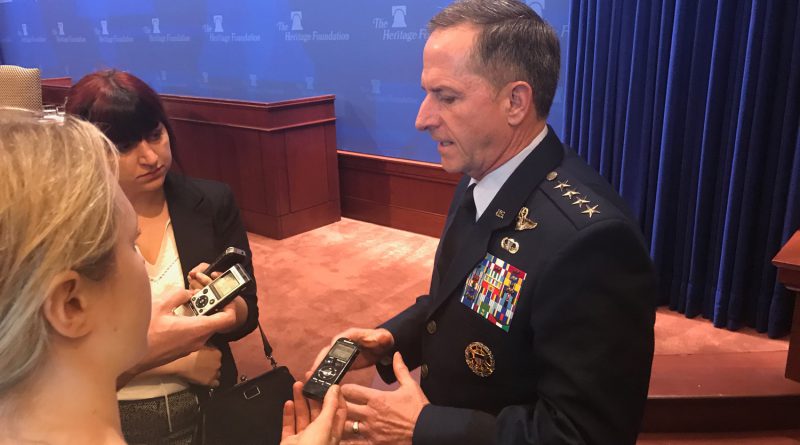 WASHINGTON — Without a repeal of the sequester ordering across-the-board federal budget cuts and a stable annual budget rather than the current short-term fixes, the military will continue scrambling to fulfill its core needs of protecting American interests at home and abroad, Air Force Chief of Staff Gen. David Goldfein warned on Wednesday.

Goldfein said the practice of passing continuing resolutions, which Congress uses to keep the government open at current spending levels when it cannot pass annual appropriations, “completely undermines a service chief’s ability to plan for the future.”

“The most important thing we can get from Congress is a budget. The sandbox that I work in is capability, capacity and readiness. I have to make strategic trades within those three bins to be able to build the best Air Force we can build,” the general said at a Heritage Foundation event.

Goldfein’s criticism of Congress comes at a time when the military’s top brass is becoming increasingly vocal about the damage they feel the short-term measures inflict on force readiness.

He said lack of an annual budget had the effect of “wreaking havoc” on the ability of the military to plan ahead.

The current resolution is set to expire April 28. Unless Congress passes another one or a budget for the fiscal year that began last October, the government will shut down. It is expected that Congress will take action to avoid a shutdown.

If another continuing resolution is passed, Goldfein said, the Air Force would be left with a $2.8 billion shortfall that would halt what he called “the end-strength growth that gets right at the heart of our readiness.”

Army Chief of Staff Gen. Mark Milley told the House Committee on Armed Services that the lack of consistent funding “would result in significant negative impacts to current and future readiness and a reversal of progress towards reducing an already high military risk.”

Naval Chief of Operations Adm. John Richardson told the same committee that the Navy “will need to identify areas to cut over $500 million to shift to much-deserved pay raises, housing allowances, and other cost of living adjustments for our sailors.”

Republican Sens. John McCain of Arizona and Lindsey Graham of South Carolina have come out in opposition to any attempts to pass a continuing resolution because doing so will not increase the military’s budget. McCain has threatened to shut down the government if no military spending increase is forthcoming.

Last month, the Trump administration released a proposed budget that calls for a $54 billion in new military spending.