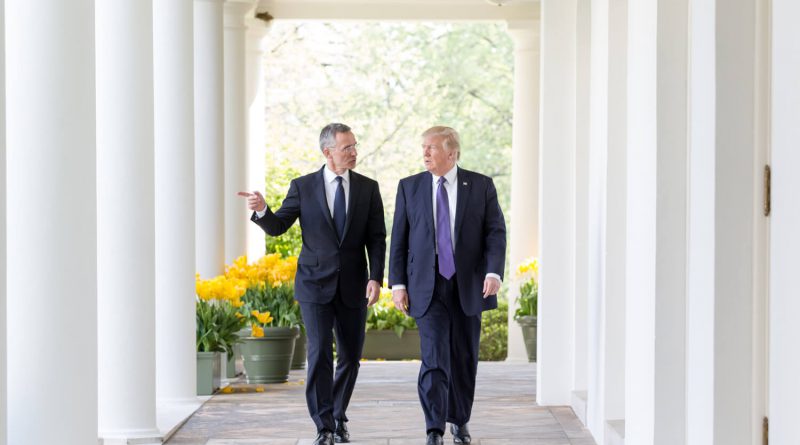 Stoltenberg, speaking at George Washington University’s Elliott School of International Affairs, defended NATO’s seven-decade record as a guarantor of European security even as he sought to downplay issues including a resurgent Russia and suggestions of a souring relationship with the Trump administration.

“The message to me and to NATO has been very consistent in all my interactions and in all my different conversations with the president and also with his security team,” Stoltenberg said. “They are committed to NATO, that they want to see that NATO continues to adapt.”

At a press conference on Wednesday, the president continued to call for more spending by NATO member states.

“In facing our common challenges, we must also ensure that NATO members meet their financial obligations and pay what they owe. Many have not been doing that,” Trump said.

But on Thursday, Stoltenberg said European members as well as Canada are starting to spend more money on their militaries as well as on the collective defense of NATO members, a switch from years of declining military spending.

“We saw an increase of 3.8 percent in real terms, or $10 billion. That’s a significant increase,” Stoltenberg said, but noted there is room for improvement.

Only five of the 28 countries in the alliance are meeting the spending target of 2 percent of their Gross Domestic Product as stipulated in a 2006 agreement. The U.S., Poland, Greece, Canada and Estonia are current on this commitment while the rest, including Germany, are not.

Funding has become a major bone of contention between the U.S. and its European allies, especially at a time when American military engagements abroad seem to be gaining steam.

Stoltenberg characterized the U.S airstrike of a Syrian base as a “U.S operation, based on U.S intelligence,” although he admitted that NATO, while not having troops on the ground in Syria, was providing surveillance planes “for a big picture” of the battlefield. He did not say whether NATO had been consulted before the strike, which was in retaliation for a chemical attack against Syrians.

Stoltenberg said there were no insurmountable ideological fissures within NATO that couldn’t be overcome through dialogue.

“NATO is an alliance of 28 democracies. We should not be afraid of open debate, people having different opinions, even criticizing us. They are always wrong,” he joked, “but that is part of living in democratic societies. We are safer together than alone.”