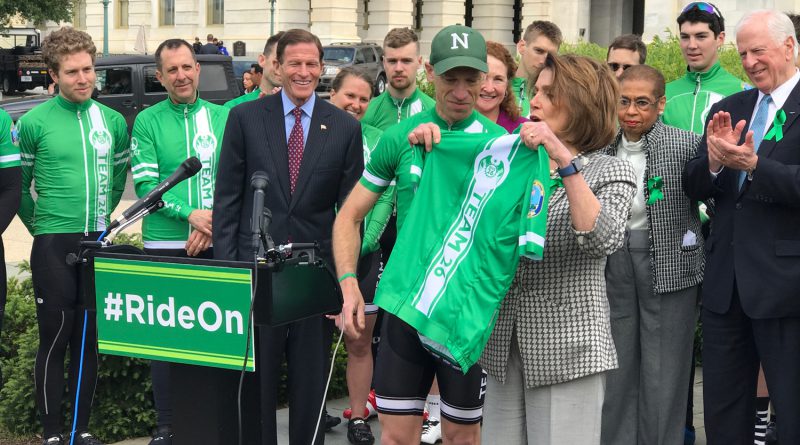 WASHINGTON–Twenty-six bicyclists representing the victims of the 2012 Sandy Hook Elementary School mass shooting rallied on Capitol Hill Thursday to criticize Congress’ failure to address gun violence at a time when the Trump administration is doubling down on its support of pro-gun groups like the National Rifle Association.

“By failing to do anything, Congress remains complicit in the carnage that’s occurring every day in our cities and the mass shootings that occur way too regularly in our country,” said Monte Frank, a Connecticut attorney who is one of the ride’s organizers.

“Ninety percent of Americans, including 80 percent of gun owners, favor universal background checks and Congress has done nothing,” he said.

He charged Congress with being more interested in “lining its pockets with NRA money than protecting Americans.”

Last week, President Donald Trump appeared at the National Rifle Association convention where he declared to its members “the eight-year assault on your Second Amendment freedoms has come to a crashing end.”

In the same speech, Trump also called himself the NRA’s “true friend and champion in the White House.”

Trump’s campaign benefited from an early endorsement by the group, which poured millions of dollars into his campaign.

The NRA did not immediately respond to a request for comment.

At the rally, House Minority Leader Nancy Pelosi said the Republican-dominated Congress needs to vote on gun violence prevention. She accused GOP members of being more concerned about their political survival than the victims of gun violence.

Activists at the rally acknowledged the road ahead had been made more difficult by the election of an openly pro-gun president.

“With the new administration, it’s going to be much more difficult to get any meaningful legislation, which is why we are riding away from the Capitol this year and we are riding through states that have passed through meaningful gun violence prevention legislation,” said Andrea Myers from Danbury, Connecticut, one of the 26 riders. The group will hold rallies along the route in Maryland, Delaware, New Jersey and Pennsylvania.

After the Sandy Hook Elementary School shooting, President Barack Obama pledged to “use whatever power this office holds to engage my fellow citizens — from law enforcement to mental health professionals to parents and educators — in an effort aimed at preventing more tragedies like this.”

That effort ultimately failed when 45 Republican senators and four Democrats blocked a bill that would have expanded mandatory background checks to include guns sold at gun shows and online. Obama called the bill’s failure “a pretty shameful day for Washington.”