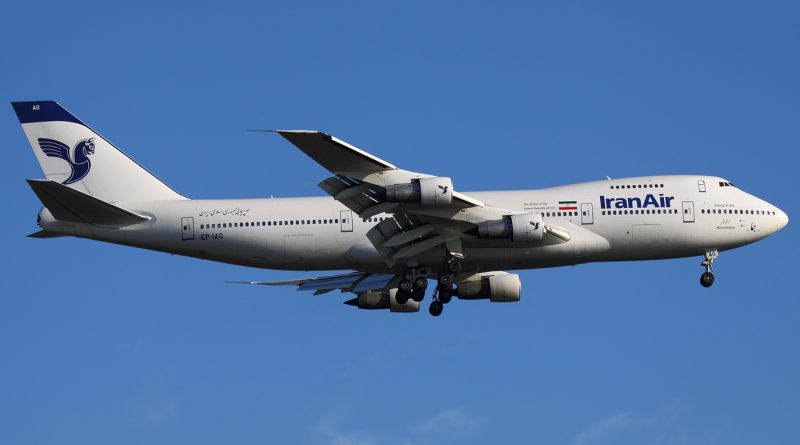 WASHINGTON—Critics of the Iran nuclear deal charge that a pending $54 billion aircraft sale by the Boeing Company to the Islamic republic would likely lead to the diversion of the aircraft for dual military and civilian use in violation of existing United States export restrictions.

Of particular concern, opponents of the deal warned, April 20, at a Heritage Foundation panel discussion, was the possible use by Iran Air, the country’s flag carrier, to clandestinely transport troops and military equipment into war zones the US is actively engaged in, including Syria and Yemen.

“The Islamic Republic has decided that its civil aviation sector can be suborned to the ideological and military needs of the regime, whenever and wherever it is necessary,” said Emanuele Ottolenghi, a senior fellow at the Center on Sanctions and Illicit Finance, a Washington-based think tank that provides research on the effectiveness of sanctions as a tool for foreign policy.

Ottolenghi said that in 2011, before the Joint Comprehensive Plan of Action (commonly known as the Iran nuclear deal) was signed between Iran and the five permanent members of the United Nations Security Council plus Germany, Iran’s two biggest airlines were sanctioned by the US Treasury Department for violating what he called “the most elementary, most obvious rules to which commercial airlines are beholden within the framework of international civil aviation.”

There is no guarantee that these planes are entirely safe to fly commercial routes.”

Iranian airlines, Ottolenghi said, were ferrying weapons, missile components and military personnel to Syria and Yemen, even while engaged in questionable aviation safety practices including turning off their transponders in midair to disguise their movements. The airlines, he added, routinely file false flight manifests to hide the true nature of their missions.

“When these aircraft are carrying high explosives and other military components and are then being repurposed within a few hours to carry passengers, there is no guarantee that these planes are entirely safe to fly commercial routes,” Ottolenghi said.

Along with Iran Air, the US Treasury Department under the Obama administration also placed Mahan Air, a privately owned Iranian carrier, under sanctions for allegedly “providing financial, material and technological support to the Islamic Revolutionary Guard Corps-Quds Force.”

The Quds Force is an elite unit within the Revolutionary Guard responsible for Iran’s external military operations and is under the direct command of Iran’s Supreme Leader Ayatollah Ali Khamenei. In 2007, the Revolutionary Guard and its component, the Quds Force, were placed under sanctions by the US. Last February, the Washington Post reported on plans within the Trump administration to designate the group a “foreign terrorist organization.”

Iran Air was removed from the Treasury Department’s Specially Designated National (SDN) list in 2016 while Mahan Air is still blacklisted. The list is meant to “block any property and interests in property under US jurisdiction of the designated entities and individuals,” according to the agency’s website.

The Treasury Department did not immediately respond to inquiries asking for a comment for this story.

Another critic, Diane Katz, a senior research fellow in regulatory policy at the right-wing Heritage Foundation, also voiced concern about the possibility that the Boeing sale could be subsidized through the Export-Import Bank (EXIM).

Bank is backed by the full faith and credit of the United States.”

According to the bank’s website, EXIM is an Executive Branch agency that provides American companies with financing “when private sector lenders are unable or unwilling to provide” the funds necessary to complete the transaction,” and since the bank “is backed by the full faith and credit of the United States, EXIM assumes credit and country risks” for any such sales, as would likely happen in the Boeing sale.

She said the bank’s past record of keeping track of dual civilian-military use products was not encouraging. Katz said the number of American jobs the deal is supposed to “support” is also suspect. Boeing puts the number at 18,000.

“The word is private banks are kind of sheepish about financing the Boeing deal,” Katz said. “(Boeing) has also been saying the financing from taxpayers is necessary because of Airbus’ subsidies from Europe,” where it is headquartered.

An EXIM spokesperson dismissed concerns the bank was involved in any deal-making with Iran.

Airbus, the European aerospace giant, is among several manufacturers competing to supply aircraft to Iran. In January of this year, the company reported Iran Air had taken delivery of the first plane as part of a 100-aircraft deal that would eventually see the Iranians take delivery of as many as 500 new aircraft from various suppliers from around the world.

“We shouldn’t be handing out US taxpayer money, $54 billion, to a company (Boeing) that sells aircraft to an airline that continues to ship weaponry and terrorists,” said Mark Dubowitz, the chief executive officer of Foundation for Defense of Democracies.

It’s a bad deal, but better than the alternative – an unconstrained Iran.”

Not everyone agreed with the panel’s conclusions.

Richard Betts, an adjunct senior fellow for National Security Studies at the nonpartisan Council on Foreign Relations suggested the bigger question is how the competing Airbus plane sale to Iran will affect the nuclear deal, and less so on what the planes will be used for.

If the administration tries –and succeeds— in forcing the France-based company from fulfilling its now contractual obligations to deliver the planes, it opens up a big potential controversy with an ally, Betts said.

Such a move would put Trump on a head-on collision course with a traditionally American-friendly European Union that has grown increasingly alarmed at Trump’s aggressive and sometimes confusing foreign policy.

If the administration fails to stop Airbus while impeding Boeing, Betts said, it would also hurt the president domestically.

“It lets a foreign company get the profits instead of American Boeing, thus contradicting the basic Trump economic policy of ‘America First,’” he said. Betts said scuttling the nuclear deal in its entirety because of the Boeing issue would be a mistake.

“The argument for not trashing the Iran nuclear deal is the same as ever: it’s a bad deal, but better than the alternative – an unconstrained Iran which, without the deal, could proceed directly to building nuclear weapons,” said Betts.

Last November, the House of Representatives passed a bill that would have stopped the sale. The bill is currently stalled.

The bill’s sponsor, Bill Huizenga (R-Mich.) said through a spokesman that he intends to reintroduce the bill again during the current congressional session.

“Our bill doesn’t ban the sales, what it does is it prevents US financial institutions from financing the sales,” Brian Patrick, the congressman’s communications director.

The bill would stop all American banks, including those that are privately owned, from taking part in any such sales.

“We definitely don’t think that taxpayer dollars should go to support or finance any type of sale of this money,” Patrick said, cautioning against

He cautioned against pitting jobs against national security saying Boeing should “think hard about who they are going to choose to do business with,” and that it was “well-known Iran is the world’s leading state-sponsor of terror.”

Iran is continuing to meet its obligations under the JCPOA.”

On Iran Air, Boeing said it would continue “to follow the lead of the U.S. government on all our dealings with approved Iranian airlines.” The company said a Trump administration statement released on April 18th “that Iran is continuing to meet its obligations under the JCPOA,” allowed the company to enter and remain in a contract with Iran Air.

President Donald J. Trump, a vociferous opponent of the Iran nuclear deal has in recent days ordered “a National Security Council-led interagency review of the Joint Comprehensive Plan of Action that will evaluate whether suspension of sanctions related to Iran pursuant to the JCPOA is vital to the national security interests of the United States.”

Any such review is likely to include a closer look at the Boeing deal and could also possibly include the redesignation of Iran airlines found to be out of compliance with American export regulations.