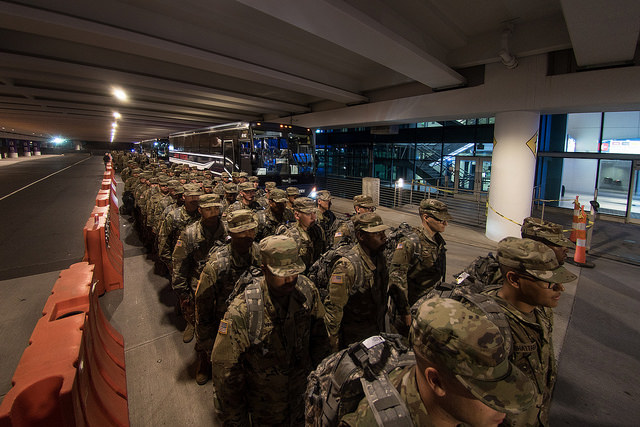 About 44,000 trainees and cadre from initial-entry training centers will travel home for the holidays on Victory Block Leave. (South Carolina National Guard)
Conflicts and Terrorism
By Jenny Gu on February 28, 2018 US Army
Tweet

WASHINGTON – The Army goal of recruiting 80,000 active-duty troops and 15,600 reserves in 2018 may be tough to achieve in a strong economy with a low unemployment rate, but the bigger problems may be young people’s lack of knowledge about the military and the fact that many are disqualified because they weigh too much, according to an Army recruiter and a Rand Corporation researcher.

According to Lt. Col. Amanda Iden, commander of Army Baltimore Recruiting Battalion, the Army achieved its 2017 goal of recruiting 68,500 troops.

But the fiscal 2018 goal is even more ambitious – to correspond with the new national defense strategy released in January that outlines a military modernization that demands a stronger military force.

“I think for all services but particularly for the Army as the largest service, it will be challenging,” said Beth Asch, a senior economist at Rand, a large think tank that has a major focus on defense issues.

Research shows that when economy improves, people are more focused on other job opportunities than a career in military.

According to Iden, recruiting is hurt because young people don’t understand what a career in the military offers. She said that 50 percent of youth report having little to no knowledge of the military.

“Students are told they can choose to go to work, pursue a college degree or look to technical education when they are planning for life after high school,” she said, “They can do all three at the same time with the Army.”

It is also a concern that 70 percent of young people don’t qualify for military service, Iden said. Obesity was the number one reason, which accounted for 31 percent of disqualifications last year.

However, the percentage of women recruited in last two years has been rising, and the Army will continue efforts to attract more female recruits, she said.

Iden suggested that the Army’s future recruitment strategy would be focusing on education to inform people about what a career in military is like and what benefits troops receive.

“The Army needs help combating the misperception that the military is a last resort,” she said.