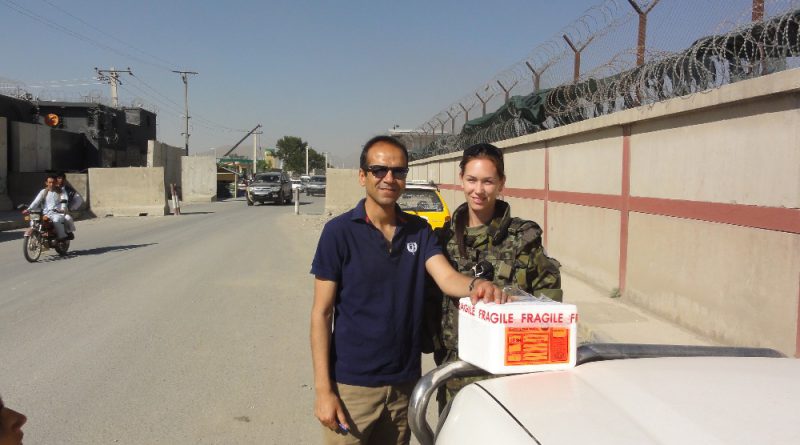 Wahid Hafizi, left, stands with a military guard and a cornea (in the box) at the NATO air base in Kabul, Afghanistan. (Photo courtesy of Berkat.)
Conflicts and Terrorism
By David Thill on March 13, 2018March 23, 2018 global health, Kabul, medill explores, Paris, refugee crisis
Tweet

Paris – Wahid Hafizi has a job to do.

He’s got a patient. He’s got an operating room. He’s just waiting for the final piece. That would be a cornea: the clear tear-soaked outer layer of our eyes responsible for focusing our vision. At the moment, it’s en route to Kabul via airplane from the Czech Republic.

Hafizi gets the call: It’s in.

With that, he drives to the NATO air base in Kabul, where gun-toting guards present him with the cooler containing the cornea – only one per patient, even if they’re blind in both eyes; the waiting list is already long enough, and this process is complicated, so patients can only receive one – which he then drives back to the Kabul-based French Medical Institute for Mothers and Children, where the patient is already anesthetized and the surgery begins.

By Hafizi’s count, that scenario, or something close to it, played out about 400 times beginning in 2005 through 2016. It was called Project Adzamal, and it was sponsored by a Czech Republic-based nonprofit named Berkat. The volunteer-run agency had a contract with the Czech Eye Bank, which supplied the donated tissue. (Some corneas also came from the San Diego-based International Cornea Project.) At the beginning, at least, the project was funded by the Czech Ministry of Foreign Affairs, though it switched to a donation-backed operation in 2011, according to Jarmila Müller, a Berkat statutory representative.

In Afghanistan, the project had slightly rockier beginnings, requiring a fatwa – a legal decree – from Islamic leaders stating that cornea transplant is allowed under Islamic law.

Originally named for a young blind boy in Afghanistan, Project Adzamal began with a team of six surgeons: two European specialists and the four Afghan doctors they trained to perform the operation. But over the next decade, that team grew smaller. The European surgeons left Afghanistan, and since funding dropped off and resources diminished, most of the others also left the project.

Eventually, it was just Hafizi, Berkat’s one Kabul connection, the lone volunteer carting corneas from air base to eye socket. But as insurgent attacks in Kabul became more frequent – especially for people working with foreign organizations like Berkat – Hafizi decided it was too dangerous to stay in Afghanistan. He had a family to take care of, and it seemed his friends and colleagues were all leaving the country for their own families’ safety.

And so, on Jan. 1, 2017, Wahid Hafizi left Afghanistan. With his wife and three children waiting for him to send for them – and the future of Project Adzamal in the air – he went to Paris.

Slight and soft-spoken with thinning hair and large black-rimmed glasses, his shoulders raised just a little so that his whole frame seems to retreat into itself, Hafizi, 46, easily blends in with a group. He was almost silent at first on a recent February afternoon, sitting on a low bench in the corner of a cramped dining room in the Pierre Claver school, an inconspicuous apartment-like space in Paris’ Seventh Arrondissement where newly arrived refugees come to learn the language and culture of France.

But he does talk, in fluent English, which he speaks in addition to his native Dari, and – now that he’s in France for the long haul – he’s working to become fluent in French. And once you’re in conversation with him, he warms up, especially talking about Project Adzamal.

The surgery itself was just a small part of the whole process, Hafizi said. Once he had retrieved the exogenous tissue sample and the patient was in surgery, it only took him about an hour to complete the procedure.

But the aftermath was its own adventure. He described his relationship with his patients as a marriage: Once he operated on people, he expected to see them again, as much as necessary, to make sure their eyes stayed healthy.

He says he remembers every patient he operated on. Even now, he still stays in touch with some of them over Facebook and other messaging apps.

They were young: When he took over as the sole operator, Hafizi decided only to perform the surgery on youth who were about 6 to 16 years old. Again, limited resources meant limited capacity, and these young people had their whole lives ahead of them. They seemed like the best candidates to receive at least partial eyesight through Hafizi’s work.

The whole thing often made him uneasy, he said. Most of the time the corneal hand-off occurred right outside the air base. Standing there with the cooler, getting “strange looks” from the people around him on the crowded street, Hafizi felt especially vulnerable. He worried he might be risking his safety, and often considered stopping the project altogether.

But “I forget all these things the day after the surgery, when I opened the eye patch, and I saw the love on my patients’ faces,” Hafizi said. “And I promise to myself that I will do it again and again.” (Hafizi’s comments here have been edited slightly for clarity.)

So his decision to leave Afghanistan wasn’t easy. There were many sleepless nights, he said, in those weeks at the end of 2016 leading up to his departure. Besides his family, he had his patients to consider. He was Berkat’s only surgeon trained and willing to perform the operation. But in the end, he felt he had no choice.

He arrived in Paris with connections he first made about a decade ago, when he was there for medical training. Those connections helped him secure a job working on a volunteer basis at the Hotel-Dieu hospital, assisting his former teachers with patient examinations. He wants to update his certification so that he can operate by himself.

But before he can really consider any of these pieces of his life – giving his family the all-clear to join him; his certification; his career – he needed to be recognized as a refugee by the French government.

As it happened, he got the news that February afternoon when we talked: A letter from the French Office for the Protection of Refugees and Stateless Persons confirmed that Hafizi is now officially a political refugee.

So the road ahead for him is clearer at least, if not quick or easy. Hafizi is an exception as far as refugees go, Ayyam Sureau, the director and founder of Pierre Claver, wrote in an email. Since he’s professionally trained, respected in his field and has strong connections in Paris, she predicts he’ll be able to get a job and establish himself relatively quickly – faster than it takes for most refugees to get settled into stable jobs – so his family can join him.

The future for Project Adzamal is perhaps less clear.

As of now, Müller said, the very few people in Kabul trained to do the operation are unwilling to do it. The logistics are too complicated, and Berkat lacks the funding to train more doctors and build the team. Part of the reason Hafizi was so well-suited was simply that Müller had developed a strong relationship with him.

Müller said that Berkat representatives have one person in mind – one of the original surgeons who worked on the project in Kabul – whom they’re hoping to convince to return to Project Adzamal.

Hafizi wishes he could return. “It would be one of the best days of my life,” he said, to be able to go back to Afghanistan to do the operation, to “see the happiness on my patients’ faces.”