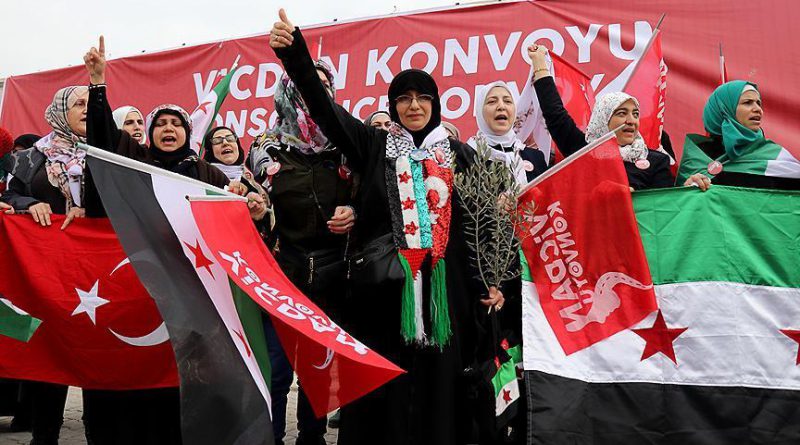 The International Conscience Convoy reached Hatay province, on March 8, which was International Women's day, to protest against the rape and torture of Syrian women in prisons. Photo:Anadolu Agency
Conflicts and Terrorism
By Muhammed Calli on March 16, 2018 Syria, Turkey
Tweet

WASHINGTON-  Thousands of women from around the world recently gathered in Istanbul and traveled to the Turkey-Syrian border to protest against the rape and torture of thousands of women imprisoned in Syria.

The International Conscience Convoy started describes itself as the “voice of the oppressed Syrian women in prisons.” The convoy of 55 buses set off from Istanbul on March 6, stopped in Izmit, Sakarya, Ankara and finally reached Hatay province, located along the Turkey-Syrian border on March 8, which was International Women’s day.

The women from around 50 countries including Bosnia, Chile, Syria, France and Pakistan called for the release of thousands of women detained in Syrian prisons.

The Assad regime is responsible for 7,699 rapes since the beginning of the war, according to Syrian Network for Human Rights. At least 864 women were reportedly raped in detention centers since 2011, although the actual number is estimated to be much higher.

More than 6,000 women, including 400 girls, are still in Syrian prisons, according to a statement by the International Conscience Convoy. Around 5 million people have fled the country since the Syrian war began seven years ago.

“A total of over 10,000 women from 55 different nationalities participated in this act in a short period of time and participants were very excited throughout the convoy because they were people who wanted to do something about Syrian women,” said Amine Tuna Erturk, one of the organizers of the International Conscience Convoy. “We met hundreds of people who shared this excitement at all the stops.”

Zumrut Sonmez, a Turkish activist and journalist, said the convoy was “the most meaningful action” taken on International Women’s day and “the most important message to be given. “

ZY, who requested anonymity for security reasons, was 27 years old when she was jailed by Syrian government in 2015 because of her opponent political views. She faced systematic torture during her imprisonment for seven months.

“It was one of the most difficult times in my life when I was behind the bars in Syria. I received systematic torture and many women were raped in prisons regardless of their ages by Assad’s men,” said ZY. “The women’s rights organizations should call to stop this brutality against Syrian women, otherwise this will never end.”

20 participants of an all-women international convoy visited Turkish President Recep Tayyip Erdogan and First Lady Emine Erdogan in a close meeting at the presidential complex in Ankara on the second day of the act on March 7.

When the convoy arrived in Hatay on March 8, thousands of women gathered together in a rally in a square to protest sexual violence and torture against women in Syria by Assad regime. Gulten Sonmez, a spokesperson of convoy, pointed out that “those who tried to win a victory by persecuting and torturing women would not be able to build anything.” “We will continue to pursue our action until each of our sisters in Syria will be releasing from prisons.” Sonmez said.