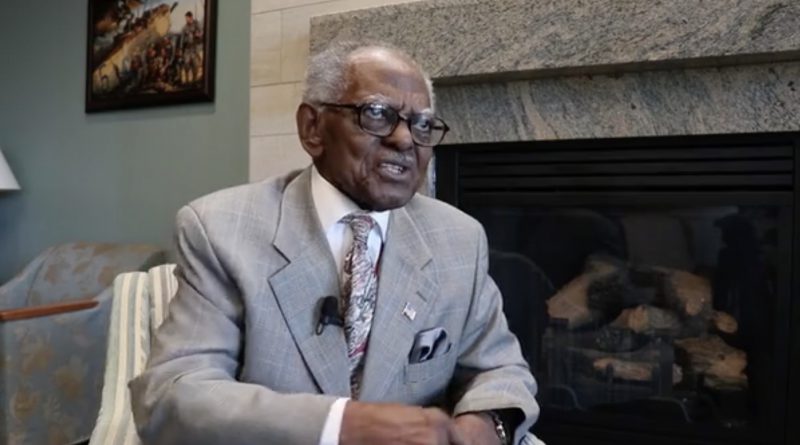 WASHINGTON– 2018 marks the 70th anniversary of President Harry Truman’s directive to end racial segregation in the armed services – a WWII Marine Corps vet talks about his experience as an early volunteer in the service.

This year is the 70th anniversary of President Harry Truman’s order abolishing racial discrimination in the military, and a new exhibit at the National Museum of the U.S. Navy looks back on how the role of African Americans during World War II influenced the president’s landmark decision.

“The more you know about the battles he depicts, the people, the ships that he has beautifully illustrated, the more you’ll get out of these paintings,” said Jennifer Marland, curator at the National Museum of the U.S. Navy.

One such painting, entitled “A New Home,” depicts the Destroyer Escort USS Mason that, along with the Subchaser PC-1264, were commanded by a majority African American crew. The painting depicts four sailors upon their arrival in Ireland, who were surprised by the Irish people’s response when they looked at them as simply Americans, not African Americans.

While nearly 900,000 African Americans served during World War II, many service members were opposed to the increased presence of Blacks in the armed forces.

“It was a paradigm shift,” Marland said. “Especially from people who came from a culture where they viewed African Americans as ‘other,’ as somebody who was not a brother in the service.”

Holsey Gillis, who enlisted in the Marines in 1943 and now lives at the Armed Services Retirement Home in Washington, said he decided to join the military at the urging of two friends who were doing the same thing.

“They found out the Marines was accepting blacks into the Marine Corps,” he said. “So, they joined, and they were telling me to join.”

Gillis barely made the cut-off for enlisting at Fort Benning, Georgia, which had a quota of accepting only seven African American Marine recruits a day. Gillis and his two friends went through basic training together and were sent to the Pacific.

“We stayed in the Marines together ‘til the war ended in Okinawa,” he said. “And we came back together. That was a blessing.”

After arriving home, Gillis enrolled at Morehouse College in Atlanta, where he Martin Luther King, Jr.

“He was at Morehouse, and he was well-liked at Morehouse,” Gillis recalled. “And when he died, that hurt me like a brother, to me.”

The “Far From Home” exhibit of paintings by the late Tom Freeman at the National Museum of the U.S. Navy closes on Feb.18, displayed well into African American History Month. The museum is on the Navy Yard campus is free to the public.

Published in conjunction with: