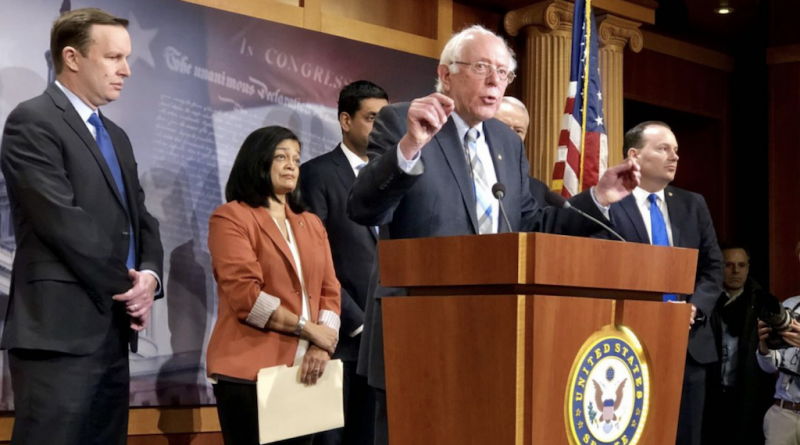 SENATOR BERNIE SANDERS, I-VT., ANNOUNCES THE REINTRODUCTION OF A BILL TO END U.S. SUPPORT FOR THE WAR IN YEMEN AT A PRESS CONFERENCE WEDNESDAY. (CAMERON PETERS/MNS)
Conflicts and Terrorism International Relations
By Dan Rosenzweig-Ziff on January 30, 2019February 18, 2019 foreign policy
Tweet

WASHINGTON — A joint resolution to quickly end U.S. support for the Saudi-backed forces at war in Yemen was reintroduced on Wednesday after failing to receive a vote in the Republican-controlled House last year.

The bill would direct the president to remove U.S. armed forces from conflicts in or involving the country within 30 days. If Congress passes the bill it will be historic. The War Powers Act, which was passed despite a presidential veto in 1973, has never been invoked to withdraw U.S. troops.

The conflict — technically a civil war between Iran-backed Houthi rebels and the Saudi Arabia-backed Yemeni government — is now in its fourth year, though a temporary ceasefire overseen by the United Nations has been in place since December.

The bill was spearheaded by a bipartisan group of lawmakers that included Sens. Bernie Sanders, I-Vt., Chris Murphy, D-Conn., and Mike Lee, R-Utah, as well as Democratic Reps. Mark Pocan of Wisconsin, Ro Khanna of California and Pramila Jayapal of Washington state.

Sanders stressed that the bill would reassert Congress’ constitutional powers. “The time is long overdue for the Congress to reclaim its constitutional right in terms of warmaking,” he said.

Despite its failure in the previous Congress, the lawmakers expressed confidence that, with a new Democratic majority in the House, the bill would pass. Last year, the Senate passed the resolution 56-41, but the House adopted a rule as part of the farm bill prohibiting consideration of War Powers resolutions.

President Donald Trump would have to sign the bill into law, veto it or let it become law without his signature. “What the president will do, your guess is as good as mine,” Sanders said.

“We are in a historical moment where major foreign policy issues must for the first time in many years be debated in the House and the Senate,” he said. “We cannot continue to abdicate that responsibility to the White House.”

Khanna, who introduced the bill in the House, cautioned that, because of a Saudi-led blockade that has stopped food and medicine from entering the country, continued war in Yemen could lead to widespread famine affecting 14 million people.

Murphy, echoing Khanna’s concerns, described the war as a “humanitarian nightmare.” He also emphasized the scale of the tragedy. “Eighty-five thousand children under the age of five have died of starvation or disease because of a man-made humanitarian catastrophe,” he said.

In addition to humanitarian concerns, Murphy warned of the national security implications of continued U.S. involvement in Yemen, noting that U.S. support for the Saudi coalition has radicalized young Yemenis and allowed groups like al-Qaida and the Islamic State to grow in strength.