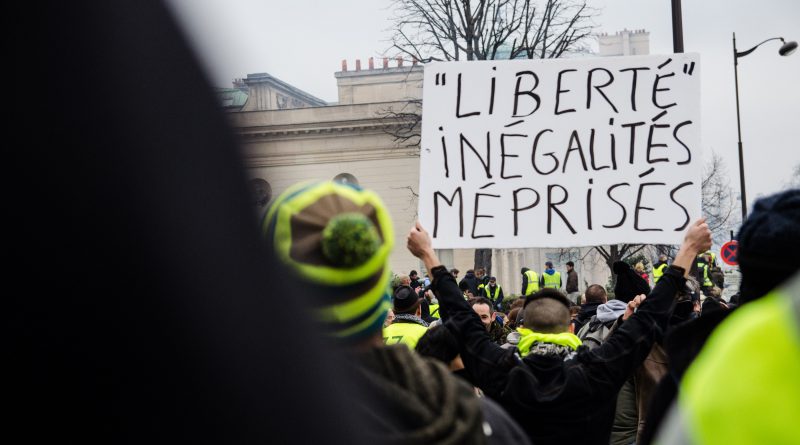 NEW YORK— The lack of recognized leaders in France’s yellow vest movement that has become an uprising against economic inequality offers two problems for French President Emmanuel Macron: there is no obvious negotiating partner and no list of agreed upon demands.

The protests originated in rural parts of France where many were angered by the proposed fuel tax because of the long distances they drive to work and to get food.

In a speech on Monday, Macron said he deplores the deaths of the 11 French citizens who have lost their lives during the protests, but also said none of the deaths were a result of police aggression. According to the French government, most of the deaths have been a result of road accidents because protesters have blocked roundabouts and major streets.

Sheri Berman, professor of political science at Barnard College in New York, said approximately 1,000 members of the police force have been injured and about 5000 arrests have occurred since the protests began in November.

On a panel at the Council on Foreign Relations about the growing discontent in France, Berman called the decision by protesters to wear a yellow vest symbolic. “The yellow vest is a symbol of a group of people who want to be seen and heard,” Berman said. Move lower

According to Célia Belin, a fellow at the Brookings Institution who studies Europe, the yellow vests’ identity as poor people who have enjoyed France’s public services is leading to a paradoxical demand.

“One demand is that they want less taxes but more public services,” Belin said. She said the demand for less taxes is a plea for more purchasing power as the cost of living has increased in many parts of France while wages have remained stagnant.

“The yellow vest movement was originally about the fuel tax but morphed into much more about social and economic inequality,” Hartley said. She compared it to the Occupy Wall Street movement that spread across the U.S. a few years ago, calling it a populist movement that does not have any leadership.

According to Berman, the vacuum in leadership is causing two big issues. First, Macron officials do not have a negotiating partner and secondly, there is no agreed upon list of demands that will satisfy the yellow vests and end the protests.

“Without organization, things tend to get more negative than positive, it makes it much harder for disparate folks to work amongst themselves to get change, and it makes it much more difficult for those who want to respond to actually respond,” she said.

Berman said one reason the yellow vest movement is leaderless is because it began on the internet.

“The internet is good at mobilizing discontent, it’s not good at taking that discontent and turning it into something positive,” she said.

While the yellow vest movement may be losing support– Belin noted that it started with a 75 percent approval rating that has fallen to around 50 percent among the French public– Macron is working to understand their plight.

The French president is embarking on a listening tour, speaking with mayors from around the country.

The turmoil in France is not all bad for Macron.

“This is an opportunity for Macron to reboot and do more of what he campaigned on –revitalize the French economy and help the less fortunate,” Berman said.

Hartley’s advice? Macron should consider raising the minimum wage, investing in the rural areas to bring local businesses back and investing in education programs such as apprenticeship trainings. But she, too, realizes the difficult decision Macron has to make.

“That is where you’re going to run into the fiscal situation. More government programs and a demand for lower taxes,” she said.