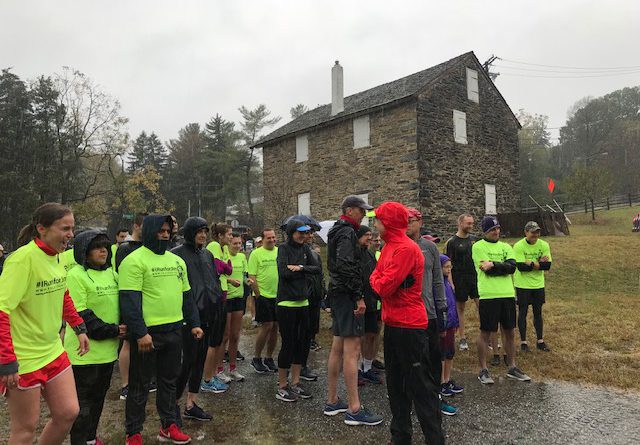 Sporting transparent ponchos, waterproof jackets and other rain gear, the runners and walkers milled around the starting point, smiling and chatting under overcast skies and pouring rain. Looking determined to complete the 5K course, they donned their neon-green Foley shirts.

“We are deeply moved by the outpouring of support demonstrated by the nearly 200 people who came to run or walk with us, no matter how hard it was raining,” said James W. Foley Legacy Foundation Executive Director, Margaux Ewen. “This gives us hope and helps us continue to accomplish our mission: advocating for the freedom of all Americans held hostage abroad and promoting journalist safety worldwide.”

At the time of the event, the foundation had raised close to $91,000 through the annual run/walk in Rochester, New Hampshire, Washington, D.C. and individual races worldwide. Funds will support the Foundation’s continued advocacy for stronger U.S. hostage policy, grants to support journalist hostile environment training and the James W. Foley journalism safety curriculum for schools across the country. The foundation’s work has already led to several positive changes in U.S. hostage policy since its founding in 2014.

Five years ago when the run first took place, it was dedicated to American freelance conflict journalist James Foley, who was kidnapped and held hostage by ISIS in Syria for two years before he was murdered in August 2014.

But the Freedom Run has since morphed into a customizable race reflected in the event’s official hashtags #IRunForJim #WhoDoYouRunFor?

“He has spent far too long in captivity in Syria and we want to bring him home as soon as possible,” Hartig said between breaths, after finishing the race in 19 minutes, 45 seconds.

Attendees included journalists, former hostages, press freedom advocates, members of the military, government representatives, and others supporting the foundation’s mission to bring all American hostages home and promote journalist safety. Runners and walkers even gathered in teams from organizations such as CNN, Al Jazeera, PBS NewsHour, Politico, Reuters, the National Press Club, among many others.

“I ran in support of all Americans unjustly held abroad,” said Jason Rezaian of The Washington Post, who was held hostage in Iran for 544 days. Rezaian joined his wife Yegi from the Committee to Protect Journalists, who pointed to Foundation President Diane Foley’s role as a leader in the movement for hostage advocacy.

Another run was held on Saturday in New Hampshire, where close to 1,000 participated. More than 400 showed their support for the foundation globally by registering for the virtual run.

More information about the James W. Foley Legacy Foundation’s work can be found at https://jamesfoleyfoundation.org/. You can still donate to the run here https://secure.qgiv.com/event/freedomrun/donate/.