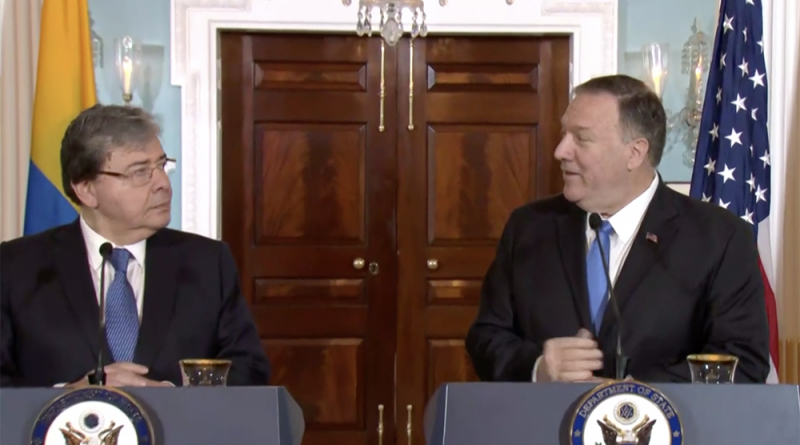 In June 2018, President Donald Trump told reporters that “more drugs are coming out of Colombia right now than before he (Duque) was president — so he has done nothing for us.”

But appearing at a news conference with Colombian Foreign Minister Carlos Holmes Trujillo on Wednesday morning, Pompeo endorsed Duque’s “ambitious goal to reduce to reduce coca cultivation and cocaine by half by the end of 2023.”

“All the language last year by Trump was focused on much shorter, immediate deadlines, and timelines for much greater eradication,” Vanda Felbab-Brown, a senior foreign policy fellow at The Brooking Institution, said. “Clearly the Trump administration has backed off, at least at the secretary level,” Felbab-Brown added.

It was the leaders’ fourth meeting of 2019. Trujillo said Colombian officials would meet with “high-level” U.S. officials throughout the day on “security, economic prosperity and democratic governance” issues.

Pompeo praised Colombia’s “valiant humanitarian efforts” in Venezuela’s ongoing economic and political crisis. Venezuelan leader Juan Guaidó challenged the presidency of Nicolás Maduro earlier this year and declared himself the interim president. The Trump administration, which had already sanctioned the Maduro government in 2017, recognized Guaidó’s government and “imposed additional sanctions on Maduro officials,” according to a report in the Congressional Research Service.

The political and economic chaos in Venezuela has created a mass exodus of its citizens. According to the UN High Commissioner for Refugees, about 4 million Venezuelans have left their country, with Colombia hosting 1.3 million of them.

“The U.S. government has provided more than $250 million to aid Colombia in its response to the Venezuelan crisis and our support is ongoing and continuing,” Pompeo said. Trujillo said “required sanctions” will be implemented “to keep isolating the Maduro regime.”