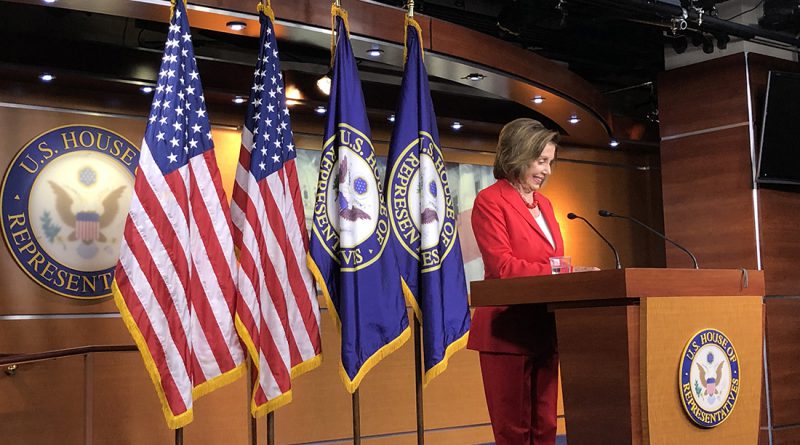 WASHINGTON – House Speaker Nancy Pelosi Thursday emphasized the need for humanitarian aid for migrant children at the southern border, reluctantly pledging that the House would pass the Senate’s version of a border funding bill.

The Senate on Wednesday passed a $4.5 billion border funding bill, which includes nearly $3 billion in humanitarian aid, and would increase security measures at the border. The Democratic-controlled House passed its version of the bill earlier this week with a stronger focus on protecting migrant children.

“We are gravely disappointed in the action taken by the Senate in opposing regular order of Congress,” Pelosi said.

Speaker of the House Nancy Pelosi on border funding bill at press conference on June 27, 2019. (Josephine Chu and Thomas Ilalaole/MEDILL)

She criticized the Senate bill for not having stronger protections for migrant children in detention centers, but said the House would “reluctantly” approve the Senate measure “in order to keep resources to the children fastest.”

“Our strongest ally in getting a better policy than that which was passed by the Republican Senate is public opinion,” Pelosi said in a statement.

At her weekly news conference earlier in the day, Pelosi said, “… All we’re saying there is for their comfort, for their safety, for their well-being, for their health, we can do so much more.”

She said that “all of these children are God’s children” and her focus is not on political threats or challenges.

“It’s only about humanity and the courage to do what is right for the children,” Pelosi said.

The House of Representatives’ bill would have increased protection and health services for migrant children. It would also have put in place stricter rules for temporary influx shelters. Pelosi said the children would not spend more than 90 days in an influx center, which would enable them to “safely be placed with family or other opportunities for their safety.”

Pelosi was asked what Congress should do about writer E. Jean Carroll’s accusation that President Donald Trump had raped her. She said she was unsure what Congress’ role would be in the case.

“We’re so immersed in what’s happening in Iran, what’s happening at our border,” Pelosi said. “So many policy issues that we have responsibility for, including keeping our elections safe today, as well as protecting the children to the best of our ability.”

“I haven’t paid that much attention to it,” she continued. “I’m more concerned about policy decisions that we have disagreements on that we need to come to agreement on that affect … the lives of the American people.”

Pelosi added that despite her focus elsewhere, she respects the concerns that are expressed by women who have made public their sexual assaults.

“In any of these things, this is about not what Congress would do,” Pelosi said. “This is about what the president’s own party would do. You’d really have to ask them.”