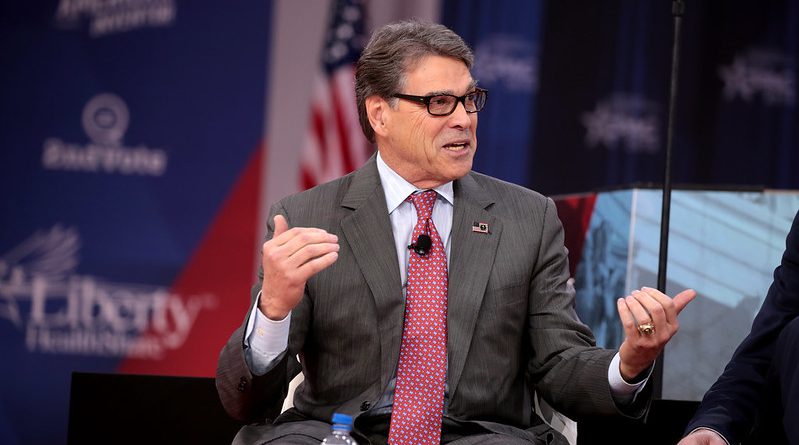 WASHINGTON – In his final public speech as energy secretary, Rick Perry Tuesday pledged $20 million – later revised to $15 million — for projects on artificial intelligence in the energy sector through the Energy Department’s innovation incubator, a program that President Donald Trump sought to eliminate.

Perry said the funding would total $20 million in his speech to a group of business leaders during a luncheon hosted by the U.S. Chamber of Commerce, but the Energy Department said it actually is $15 million and will be reserved for 23 projects that incorporate artificial intelligence and machine learning into energy technology.

The Advanced Research Projects Agency-Energy, which advances DOE-backed projects that are too early in development to receive private investment, will oversee the funds. It was nearly eliminated by Trump’s budget proposals in 2017 and 2018. The proposals sought to slash funding for the agency by 95% before eventually shuttering it completely, citing a duplication of efforts elsewhere within the government.

The projects are intended to tackle “next-generation energy challenges,” and “to help engineers execute and solve these problems in a manner that dramatically accelerates the pace of energy innovation,” the DOE said.

“We can’t fall behind. This race toward supercomputers and artificial intelligence is ongoing, and the Chinese are spending massive amounts of money to get to quantum computing,” said Perry. “And whoever gets to quantum first, wins.”

According to Perry, the competition between American, Chinese and Russian businesses to employ artificial intelligence and machine learning in the energy sector is “blatantly unfair.”

“China and Russia want to make entire continents economically dependent on them and politically subservient to their ways and their will,” he said.

When asked about the biggest challenge facing the Department of Energy, Perry said that protecting the American energy infrastructure from countries like China will be critical. Perry also highlighted the need for the U.S. to maintain its position as a leader in innovation.

“In 18 months, we will have two new ‘exascale supercomputers’ that are 30 times faster than the supercomputers we have today. That kind of innovation is why we cannot fall behind. In partnership with the American private sector, we can deliver these kinds of tools to our allies around the world that enable them to protect themselves,” Perry said.

He announced his resignation on Oct. 17 and will leave office at year’s end.

Perry was subpoenaed last month by House Democrats leading the impeachment inquiry into Trump; he has refused to comply.