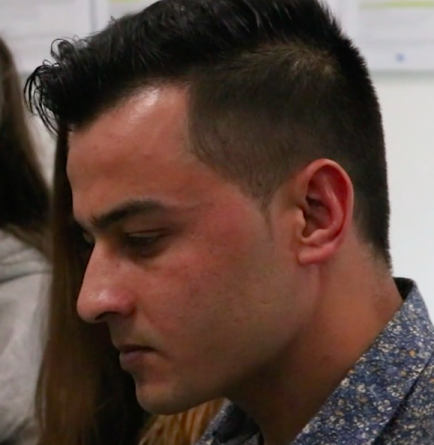 PARIS — When he lived outside a metro station in Paris, Shikhali Mirzai received a sleeping bag, tent, and clothes from a student group dedicated to aiding refugees in the city. The kind gesture stayed with the then-22-year-old, who now helps the group distribute similar packages to new arrivals.

“[Many Parisians] think refugees are like terrorists. Some people they don’t like refugees. When I heard they are helping the refugees that is like a surprise for me,” said Mirzai, now 25.

After losing his leg in an attack, Mirzai says he fled Afghanistan in 2016, traveling across Pakistan, Iran, Turkey, Greece, and Italy before arriving in Paris. While in Greece he stayed in the Moria refugee camp on the island of Lesvos, which he said was crowded and closed-off to the outside world like a prison.

First three months we are 6,000 people to a refugees camp, 6,000 people from every country, families, single people, children, everybody,” Mirzai said.

After three months, Mirzai traveled to the Oinofyta camp near Athens. Mirzai recounted his difficult journey from Greece to Italy, riding for 36 hours under a truck before reaching the border. He said he then spent 15 days in Italy before traveling to Paris with a smuggler.

When Mirzai arrived in Paris, the French police detained him, but after his release he lived among thousands of refugees at the Jaurès metro station.

That’s when he met the one of the founders of Compassion Without Borders, Diana Levaton, who gave him the sleeping bag and a tent.

Levaton recalled the number of tents outside Paris metro stations and said the refugee crisis was too large to ignore.

“You would look over this tent that you almost walked into and you would see a sea of 1,500 tents of people living in the middle of Paris on the street,” Levaton said.

After watching a documentary on the refugee crisis in Europe, Diana and her son, Ben, felt compelled to act and they organized a shoe drive at the American School of Paris. Following the shoe drive, Compassion Without Borders grew into a service club that collects clothes, blankets, and toiletries for distribution to refugees.

Jean-Yerim Baranyanka, 19, has been a part of Compassion Without Borders for the past few years and his membership in the group is personal. His father was from Burundi and his mother was from Senegal, two countries from which migration is common.

The club is also attracting new members who are motivated to make a positive impact.

Tammie van Winden, 16, witnessed the refugee crisis in Budapest, but could not find an outlet at her school to help. After enrolling at the American School of Paris, Winden joined the club this year.

“When I came to this school and I saw that there was a club that helps refugees,” Winden said. “I really wanted to help out and see what I can do and that’s why I joined.”

With the help of Diana and others, Mirzai moved to a room at Place de Clichy and enrolled in a French-language program called THOT, which teaches the language to refugees and asylum seekers.

Mirzai fulfilled his dream of studying political science at the Sciences Po, an internationally recognized research university for the humanities and social sciences. He now helps Compassion Without Borders connect with refugees to distribute collected items.

While speaking with the students during one of their weekly meetings, Mirzai asked why the students were helping refugees despite rising anti-refugee sentiments in Europe.

Sixteen-year-old Reagan Meek said she wants to change the stigma against refugees, adding that it was Mirzai’s story that inspired her to do more in Compassion Without Borders.

“While people say there’s so many people who don’t help refugees, I feel like there’s more people with a big enough heart that do,” Meek said. “I’m proud to be in this club to make a contribution.”

As for Mirzrai, he now volunteers to help distribute items to refugees and translates information to them about the process of seeking asylum in France.

“I come here, I need to help, someone has helped me,” Mirzrai said. “When [refugees] are coming here, they need the help. I need to help them.”