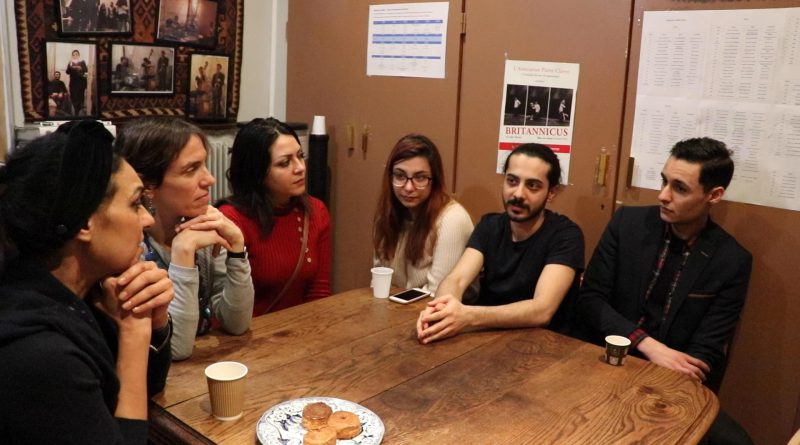 PARIS – When he was hiding in the back of a truck for 10 days on the journey from Iran to Paris, Mehdi knew only one thing about France: He would have religious freedom there.

An Air France jet brought Ridvan to Paris in comfort from Madagascar. But when he asked for asylum at the airport instead of boarding a connecting flight to his native Turkey, he knew France would offer personal safety while his opposition to the policies of President Recep Erdogan could mean a jail sentence in Turkey. Asylum was his only option.

Mehdi and Ridvan, whose last names are omitted because both were under surveillance by the intelligence communities in their home countries, were among the 122,743 applications made to the French Office for the Protection of Refugees and Stateless Persons last year. Of those, 113,322 were first-time applications, the rest were appeals.

The number of applicants granted refugee status or subsidiary protection in 2018 was only 33,380. Applicants have the right to appeal the decision. OFPRA’s website does not offer information on what happens to asylum seekers who are denied protection, though it is against international law for them to be returned to a country deemed unsafe.

Mehdi, 32, paid $4,000 Euros for his arduous journey from Iran to Paris. It was not a planned departure.

“I had good job. I had good life,” he remembered ruefully. Though he was raised in a Muslim family, Mehdi once traveled to Turkey on holiday, where he met people who introduced him to Christianity. It changed his life. He felt Islam was too intertwined with war. But Jesus offered him a liberating spiritual connection.

“I love my Jesus Christ,” he said breaking into a smile.

When he returned to Tehran from holiday, Mehdi went to meetings with many others who were studying Christianity, even though he knew it was dangerous. According to the U.S. State Department, Iran does not ensure the rights of citizens to convert from Islam and an individual who does so can face the death penalty or other harsh punishment.

“The intelligence agencies listen to your phones,” Mehdi said. “They look at your activities.”

His last meeting with other Christian converts was on a Thursday evening. He and two friends were in an apartment studying scripture, waiting for others to arrive. “The intelligence people opened the door hard,” he recalled. They grabbed his friends, but Mehdi jumped out of a first floor window and ran away, wearing only socks, his cellphone in his pocket.

He hailed a taxi and rode to a small city some distance from Tehran. Within days, he found a smuggler. “Saying this to you, I have stress,” he explained, and couldn’t continue talking about the details of his flight from Iran.

Mehdi knows his father is mad at him for leaving home, but he said he had no choice. They communicate on the messaging platform What’s App, which he believes cannot be hacked. He does not know what happened to his friends who were with him on that last evening in Tehran.

He was recently baptized in the Mormon faith at a church near the shelter where he lives in Paris. “I have so many friends there,” he said, forgetting his anxiety once again.

Mehdi found his new church on mormon.org after a recommendation from a friend in Germany. He chatted with an online missionary. When no one called back in a few days, he found the address of a church close to his temporary shelter and walked there. In the Mormons, he found a much-needed support group, a new family in France.

Ridvan’s story echoes Mehdi’s experience of a totalitarian government surveilling its citizens. Only in his case, he was surveilled twice while working in foreign countries, for his political beliefs rather than his religion.

In 2014, Ridvan, then 22, was studying English at a university in Istanbul, preparing for a career in education. “I decided to be a teacher when I was 15 years old,” he said.

The year before he graduated, the political situation in Turkey had deteriorated badly. Turkey has long been seen by the West as a bridge between Europe and the Middle East, a majority Muslim country on the road to establishing democracy. Yet there was always tension in Turkey between secularists and Islamists. The Turkish military has traditionally favored a secular government and participated in multiple coups d’etat to remove authoritarian leaders it saw as violating the constitution.

A cleric and educator named Fetullah Gulen, living in the United States in self-imposed exile, enjoyed an enormous following in Turkey, especially among the military, judiciary and intelligentsia. The movement, called “Hizmet,” is known for education, service, pacifism and modernism. In 2013, then prime minister Recep Erdogan, began to purge Gulenists from positions of power or influence in government and academia. For a young college student like Ridvan, watching the repression of intellectuals was terrifying.

“I guessed that things would (get) worse, so I decided to go abroad to be away from the problem,” he said.

Immediately after graduation, Ridvan accepted a job offer from an international school in Libya where he taught English for two years.

After an attempted coup to oust Erdogan occurred in July 2016, Ridvan recalled being at home while unknown armed forces arrested five of his friends at the Libyan school.

“At the time they were arrested, we understood that things are not just limited to Turkey. They are going to seek for everybody all around the world that they think is a threat. That’s why I left Libya.”

After spending a short time in Tunisia, Ridvan moved to Madagascar for another teaching job, but after President Erdogan visited Madagascar, Ridvan and other Turkish citizens were arrested. They contacted the United Nations from jail.

Ridvan believes the UN arranged for their release, but Madagascan officials ordered the group to return to Turkey. He bought a ticket to Istanbul on Air France with a flight change in Paris.

“At the airport, I was asked why I didn’t buy a direct flight. I said, ‘I don’t like Turkish Airlines, the company. I prefer Air France.’”

When he arrived at the Paris airport last year, instead of changing planes, Ridvan changed his life. He rejects the suggestion that he was ever a threat to Turkey, deserving of surveillance.

“I am an ordinary citizen. I had no problem with my people or my country,” he said. “Right now in Turkey, even though the system is called democracy, there’s no democracy. There’s no law.”

While their asylum applications are pending, applicants receive basic housing and financial support. The benefit starts at 6.80 Euros per day for a single person, and 10.20 for a two-person family. If the asylum seeker has not been given housing, 4.20 Euros are added per day.

Ridvan has an apartment in Paris and is learning French through lessons at the Pierre Claver school. There, he has also found a new family made up of other young refugees eager to create new lives.

“I’m happy here,” he said. And though he was an English teacher, words failed him in expressing how lucky he feels to have escaped to Paris.

“That’s the way how luck came here,” he said.