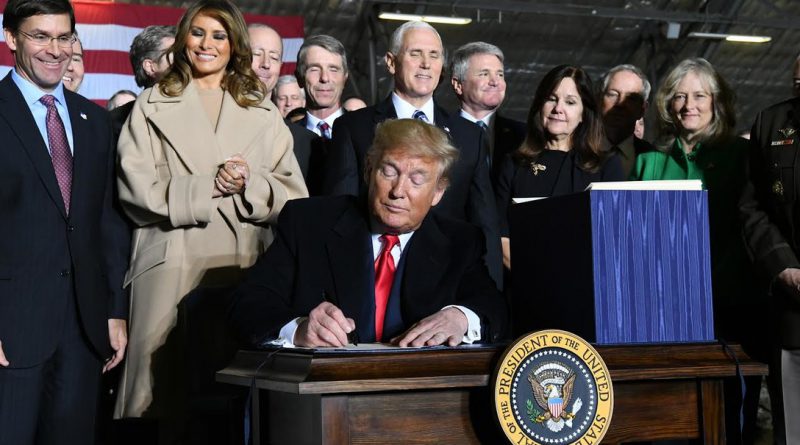 WASHINGTON—The creation of the United States Space Force may end up being a boon for overall military recruitment, according to Air Force Secretary Barbara Barrett.

She said the online applications to be a part of the new branch have been “significant.”

“We found that is not affecting just the Space Force candidates, but it’s affecting Air Force as well,” she said. “I wouldn’t be surprised that the Navy and the Army also are getting a resurgence of attention and attraction because the Space Force is bringing positive attention to the military.”

The Air Force has seen an uptick in recruitment over the past few years, though it is unclear if any of it is attributable to the creation of the Space Force. The branch brought on about 24,000 recruits during fiscal 2014 and 2015, and then experienced an upturn of almost 32,000 recruits in fiscal 2016 and about 31,000 in fiscal 2017. In 2019, the Air Force recruited 34,660 airmen, according to statistics released by the Air Force Recruiting Service.

Experts say that the Space Force will require personnel with a range of skill sets, including operators, intelligence officers and logisticians. The work will be much more specialized than the “average Air Force job,” according to a fellow at the Center for Global Security Research, especially as the need for space situational awareness becomes more critical.

Edward Morris, a retired Air Force Reserve colonel and vice president for commercial space at Decisive Analytics Corp, wrote in a January editorial for Space News that the Air Force must “successfully recruit professionals desiring a space career in addition to transferring space experts from the other military services” in order to meet Space Force personnel requirements. This includes crafting a specialized message for high school students that emphasizes the opportunity for space exploration and the creation of a Space Force ROTC program at the collegiate level.

Approximately 16,000 military and civilian space personnel were assigned to the force when President Donald Trump redesignated the Air Force Space Command as the United States Space Force on Dec. 20, 2019. Many of those personnel are currently serving as airmen.

“Everybody is using it,” she said, referring to space itself. “We can’t live without it, and only when we stop and think about it do we realize both how important it is and how fragile it is, and therefore the space domain is an important place for us to pay attention to defending.”