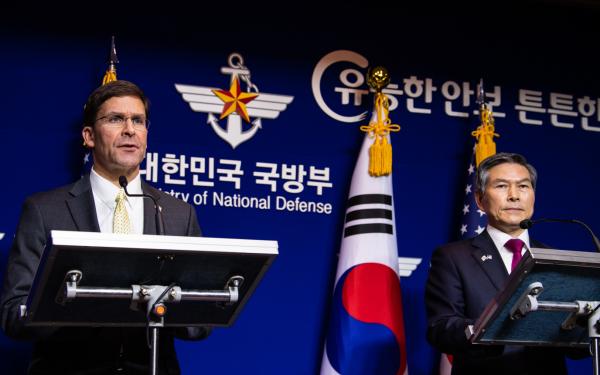 WASHINGTON – U.S. and South Korea reached a critical point in their military expense dispute as the U.S. announced plans to furlough 9,000 South Korean workers on its bases in the country if no deal is reached by April 1.

“South Korea can and should contribute more to its defense,” Defense Secretary Mark T. Esper said at a joint press conference with South Korean Defense Minister Jeong Kyeong-doo on Monday. “Increasing burden-sharing is a top priority for the U.S. across our alliances.”

President Donald Trump has asked U.S. allies, particularly wealthier partners, to shoulder a larger share of the burden of the military cost to maintain peace, security, and stability globally.
The U.S. and South Korea have been negotiating a new Special Measures Agreement to split the military cost of maintaining about 28,500 U.S. troops on the Korean peninsula.

The South Korean government is considering an increase in its contribution to the agreement, but not as much as the United States has demanded — $5 billion a year. That is nearly five times the $900 million South Korea has paid in the past.

“Last year, there was a big increase for us as there was 8.2% increase of the SMA contribution,” Jeong said at the news conference.

Esper said that “South Korea must bear a more proportional share of the cost of maintaining its security.”

Jeong said Korean government is contributing to the defense cost both directly and indirectly beyond the SMA contribution.

“Our government has set the 2020 defense budget at approximately $43 billion,” which will help improve South Korea’s military capabilities to respond to nuclear weapon threats as well as contribute to the combined defense cost, he said.

The SMA negotiation is facing a critical phase as South Korea has been notified that if the two countries don’t come to the agreement before April 1, 9,000 South Korean workers on the U.S. military bases will be furloughed.

Esper said “We are both hopeful, and we hope we reach the agreement soon, before the end of March.”

As both officials remain positive about the agreement, Jeong emphasized that there must be an agreement soon “at a reasonable and a fair level in a mutually win-win direction.”

Some House Armed Service Committee members said they were concerned that the dispute would jeopardize the relationship with South Korea at a recent committee hearing.

“U.S soldiers are not just there to protect South Korea,” Committee Chairman Rep. Adam Smith said. “Our interests and stability in the region are paramount.”

John C. Rood, a top policy official at the Defense Department, told the committee that the Pentagon is “committed to reaching a mutually beneficial and equitable agreement” that will strengthen the alliance and our combined defense.

When Rood was asked about the total cost associated with having U.S. forces on the Korean Peninsula, Rood said he could not reveal the exact cost at the time.