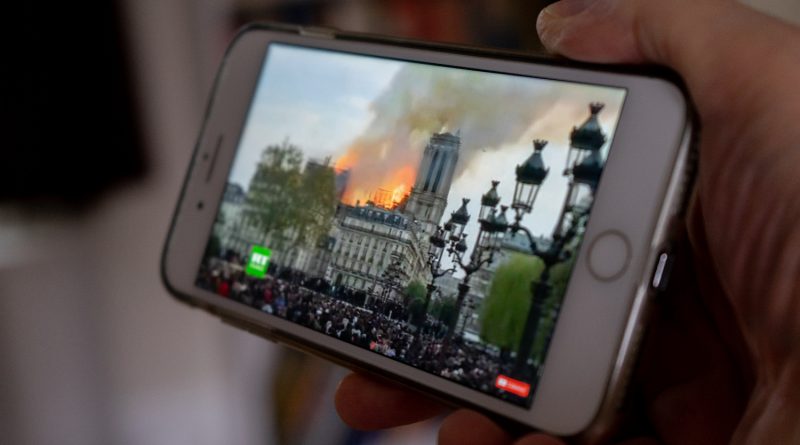 PARIS — In April, a fire tore through the Notre Dame Cathedral in Paris destroying the roof and the building’s world famous spire. As Parisians watched the ancient structure burn, the Kremlin’s disinformation machine got to work.

Almost immediately, articles, videos and posts from Russian state-funded propaganda arms began to circulate on social media. One article, quoting Jean-Marie Le Pen, the former president of the ultra-nationalist political party National Front, suggested that the fire was “criminal” and was probably the work of an intelligence service. Le Pen said that the fire is a warning to France, and that he has long campaigned against the immigration of non-Europeans to the country.

A photo posted without comment to the website of Sputnik, a Russian media outlet, showed two seemingly Arab men smiling in front of the burning cathedral. The photo was then posted to social media by a private account with the caption “muslims laughing while Notre Dame is burning.” It has since been flagged by Facebook fact-checkers as “false information.”

The aim of the posts is simple — to sow distrust in the French government and turn French citizens against each other, exploiting the tensions that already exist over issues such as low pay and immigration.

In June 2018, France’s Conseil Superieur de l’Audiovisuel (CSA), a government regulatory agency that oversees electronic media in the country, denounced the French outlet of Russia’s state-run broadcaster Russia Today (RT) for a story on an April 7, 2018 chemical attack in Douma, Syria, which Western governments attributed to the regime of Bashir Assad, an ally of Russia. The headline on the RT story was “Simulated Attacks” and it stated that a local rebel group had faked the attack. CSA said that the voices of civilians were falsely dubbed to support this version. RT later claimed there had been an error in translation.

RT, which has been described by American intelligence services as the Kremlin’s “principal international propaganda outlet,” is one of the most popular channels on Youtube, with over 2 billion views on videos posted in English, French, Russian, Spanish, German and Arabic.

Many of the recent false posts did particularly well on the RT France Youtube channel, where they garnered tens of thousands of views. Since its creation in 2014, the RT France Youtube channel has amassed over 600,000 subscribers and over 254 million views. Sputnik has fewer subscribers, 138,000, but has amassed over 93 million views.

The Russian outlets strive to give political propaganda an air of legitimacy.

“RT has a lot of ridiculous videos that go viral — like videos of a homeless man with a golden voice that was very popular a few years ago, or environmental disasters like the asteroid that struck Siberia,” said Nina Jankowicz, the disinformation fellow at The Wilson Center, a DC think tank.

“People on the internet love to consume that sort of thing and at the same time become inoculated to RT, they recognize it and trust it later on when they see the more political stuff despite not knowing the provenance of the information,” she said.

According to experts, RT and Sputnik also mix true and false pieces of information in the same video, making it more difficult to identify the disinformation component.

“These outlets have an enormous audience on Youtube across several languages and are very active. They will often mix false elements with real reporting, or link back other state-owned outlets or similarly dubious sources. In general it can be quite difficult to tell what’s false,” said Johannes Bahrke, a spokesperson for the European Commission, the executive branch of the European Union.

Recently, RT France has sought to legitimize itself by hiring former journalists and experts to go on-air for the network. The outlet has hired French journalists Frédéric Taddeï and Jean-Marc Sylvestre, as well as Alain Juillet, the former head of French counter-intelligence, among others.

“Not only does RT poach prominent journalists and experts, which has also happened with RT’s American service, but they also get real experts on the air to legitimize themselves,” said Jankowicz, “and now there’s been a call amongst Russia experts to not go on RT ever, and most people have totally boycotted the channel.”

The goals of channels like RT and Sputnik, through Youtube and other means, is to win a loyal French audience that will accept a skewed view of reality, experts say.

“RT France only talks about the problems in France, and never anything about Russia unless it’s in a positive light,” said Nicolas Tenzer, a French writer and political scientist with the Center for Research and Study on Political Decisions.

“There is more propaganda going through their Youtube channel than any other platform,” said Tenzer, who argues that RT’s main objective is to create a distrust of government in the west and delegitimize western democracy in part so that Russians will be less inclined to fight for democracy at home.

In fact, Russia is working to “destroy the idea of truth,” Tenzer said.

When asked about accusations that RT was spreading disinformation, Anna Belkina, RT’s deputy editor-in-chief, said that “neither RT France, nor any of RT projects or platforms engage in any such thing.”

Though some platforms have taken steps to combat the disinformation campaigns by outlets like RT, experts say that most fall short in addressing the problem.

“I don’t think that we should be banning outlets like RT and Sputnik, but making fun of them and potentially be doing awareness campaigns on what it is they do and how their reporting standards differ from those of real journalists,” said Jankowicz.

According to Youtube, the platform is taking some steps to mitigate the spread of disinformation generally.

“For channels like these, we have so called publisher transparency labels, which specifically gives insight into whether or not news sites receive government or public funding,” said a YouTube spokesperson, “Our work to combat disinformation is ongoing — and these transparency tools are but one feature update in a broader body of work.”