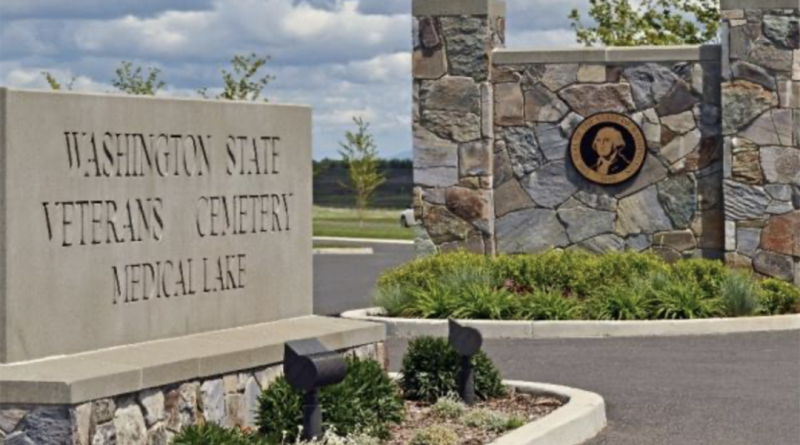 The Department of Veterans Affairs awarded nearly $3.5 million in new funding Thursday for the expansion of the Washington State Veterans Cemetery in Medical Lake.

The funding is part of the VA Veterans Cemetery Grants Program and will finance the construction of nearly 2,500 more burial sites, memorial walls, landscaping and related infrastructure.

“This is welcome news, with the priority being adding additional vaults as soon as possible,” said Rudy Lopez, cemetery director of the Washington State Veterans Cemetery. “It was necessary for us to be able to receive this grant before we run out and exhaust the capacity in the vaults, to be able to extend the life of the cemetery.”

Lopez said the cemetery’s vaults, which are pre-placed crypts, would’ve reached capacity in approximately a year without funding for the expansion.

“This expansion will ensure thousands of Veterans and family members can continue having peace of mind knowing they will have a burial option close to home,” said Randy Reeves, under secretary for memorial affairs, in a statement. “The Veterans Cemetery Grants Program allows the Department of Veterans Affairs to partner with the states to offer our Veterans increased accessibility to the burial benefit they’ve earned – not just in Washington, but across our great Nation.”

The cemetery, which is one of 143 VA national cemeteries, opened in June 2010. The initial $8.8 million development of the cemetery was funded by the Washington Department of Veterans Affairs and the National Cemetery Administration. The cemetery underwent a $2.3 million expansion in 2018 to add over 3,500 columbarium niches, which are single compartments that hold cremains, and fencing.

According to Lopez, approximately 6,000 veterans have been interred since the cemetery’s opening. He explained the cemetery is continuously growing to fit the need in Eastern Washington.

“We have the property to be able to extend the life of this cemetery for about 90 years,” said Lopez. “So every two to three years, we’ll go and secure more funding to expand, based on our need.”

According to the VA, the expansion will allow the cemetery to serve approximately 55,780 veterans and their eligible family members. Lopez and others say expanding the cemetery is a benefit to Eastern Washington.

“Anyone who has visited knows how beautiful, humbling, and special the cemetery is,” said Rep. Cathy McMorris Rodgers, a Republican, in a statement. “Thank you to Secretary Robert Wilkie and the Department of Veterans Affairs for supporting our community, our veterans, and their families.”

Published in conjunction with The Spokesman-Review