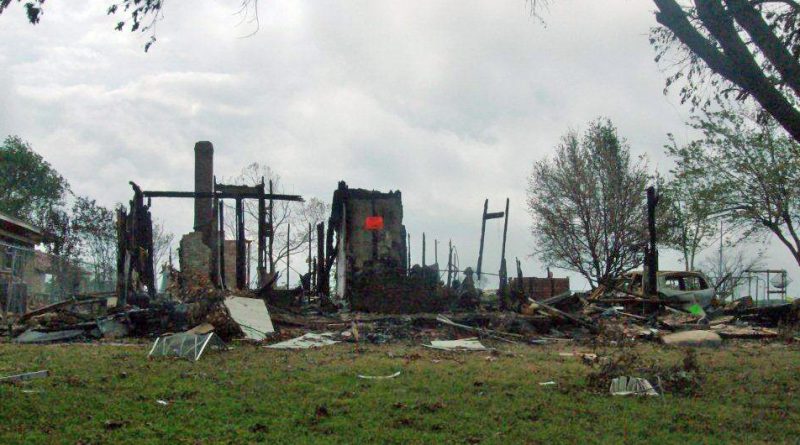 In this 2013 photo, a building is destroyed in West, Texas, where an explosion at a fertilizer company killed 15 people. (Creative Commons)
Domestic Politics
By Dalia Faheid on January 16, 2021January 22, 2021 chemical regulation, department of homeland security
Tweet

WASHINGTON — Chemical facilities would face fewer regulations under a proposed rule change from the Cybersecurity and Infrastructure Security Agency that targets 49 explosive chemicals.

In its Jan. 6 filing for the proposed rule change, CISA said that removing the explosives from its “Chemical Facility Anti-Terrorism Standards” and relying on ATF for oversight would mean facilities would no longer face the burden of complying with both agencies’ requirements. High-risk chemical facilities, including explosives manufacturers, warehouses, distributors and end users of the products such as aerospace, oil and gas, construction and mining facilities, could benefit from the change, according to the proposed rule.

Brian Harrell, former assistant director for infrastructure at CISA, agrees with the change, saying the rule would eliminate the need for “two sets of books,” decreasing administrative costs for the facilities.

“We can champion risk reduction and good security, while also removing redundancy and mountains of compliance paperwork,” Harrell said.

However, John Morawetz, director of the International Chemical Workers Union Council, cautioned that an ammonium-nitrate explosion in 2013 at a fertilizer company in West, Texas, in which 15 people were killed, is a tragic example of what could go wrong if regulations are reduced.

Colby Sholler, director of government affairs at the Institute of Makers of Explosives, which has been lobbying Congress and the outgoing Trump administration to get the rule approved, said the incoming Biden administration will halt all ongoing rulemakings so they can be reviewed by new agency heads.

President-elect Joe Biden’s nominee to lead Homeland Security, Alejandro Mayorkas, would review the proposal once confirmed by the Senate. Since the rule isn’t finalized, Mayorkas could choose not to move forward with it after the comment period. If Mayorkas chooses to finalize the rule, it may have to be re-published for public comment again, Sholler said.

Harrell, the former CISA official, said he expects House and Senate Democrats, who typically embrace industry regulation, to ask hard questions, but he said the rule is likely to gain bipartisan support because it would make regulatory processes more efficient.

“With a Democrat-controlled House, Senate and White House, I fully anticipate that the Congress will work with DHS to improve CFATS and the rulemaking will move swiftly,” Harrell said. He predicted the rule would be approved.

Though the two agencies both aim to prevent the theft and release of explosive materials, they do not regulate facilities in similar ways. Facilities that follow ATF regulations on the secure storage of explosive materials may be considered high risk by CISA and required to apply additional security measures to satisfy that agency’s requirements, such as implementing cybersecurity and detection mechanisms.

“If a facility is subject to obligations from two different agencies, it may rapidly become very difficult to fully comply with both agencies’ requirements where these do not seamlessly overlap,” said Markus Binder, senior researcher at the National Consortium for the Study of Terrorism and Responses to Terrorism.

Tim O’Brien, president of explosive manufacturer Detotec, said at a June 2019 Senate hearing that the cost of satisfying both CISA and ATF regulations was burdensome for his 20-person company. Detotec didn’t respond to requests for comment.

Sholler from the Institute of Makers of Explosives said that removing the overlapping regulations would help employees at the chemical facilities save time and increase their productivity, while also allowing CISA to reallocate its resources to facilities that aren’t regulated by other federal agencies.

While Harrell, Binder and Sholler say the rule won’t threaten national security, some industry experts believe the risk depends upon the effectiveness of ATF regulation of the chemicals.

The International Chemical Workers Union Council’s Morawetz said he is hesitant to support the rule until ATF can demonstrate that its regulations are at least as effective as CISA regulations.

“It is disappointing that CFATS is devoting their resources to these questions rather than ensuring the rights of union representatives to even know that their facilities are covered by CFATS regulations, participate fully in the development of security plans, that whistleblowers are fully protected and that CFATS inspectors are adequately trained on the health and safety hazards of the CFATS materials,” Morawetz said.

Thefts of explosives have been steadily decreasing since 1985, with only six thefts reported in 2019, according to ATF’s data. This is evidence that there is no added security benefit to requiring CISA regulation of explosives, Sholler said.

“While the program is very useful for many industries, it’s not particularly useful for ours,” Sholler said.

Published in conjunction with MarketWatch