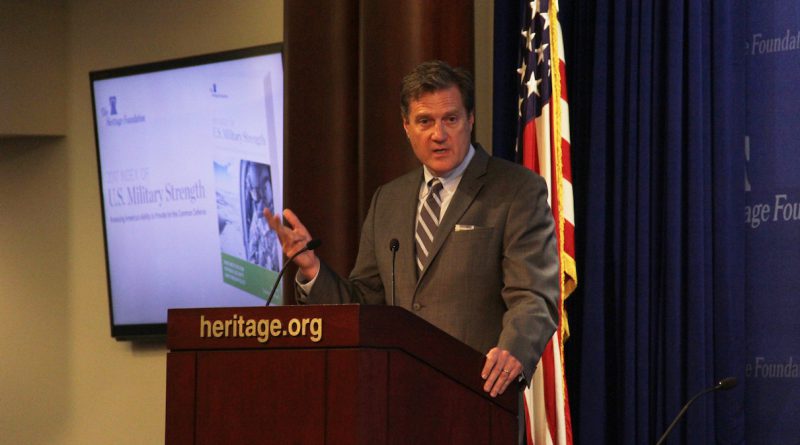 WASHINGTON – There are “significant concerns” about the U.S. military’s strength and its ability to combat global threats, according to a report released Wednesday by a leading conservative think tank.

“Clearly, the takeaway on this … is that the military is too small,” said Dakota L. Wood, editor of the Heritage Foundation’s 2017 Index of Military Strength. “It’s much too small to handle the tasks being assigned to it.”

This is the foundation’s third annual report on U.S. military strength in the context of global threats and opportunities. And as with the first two, it blames the military’s perceived decline on reduced funding — the mandatory spending caps known as sequestration.

But, as some observers have noted, since the Budget Control Act was passed in 2011, many of the crippling effects that were predicted never fully materialized. Among them:

The end of the F-35 procurement program. In fact, military officials announced the aircraft’s initial operating capability in August.

A fleet of fewer than 230 ships. Actually, the Navy still has 270 with plans to grow.

The smallest civilian workforce in department history. Today, the Defense Department’s 770,000 nonmilitary staff is larger than in the early 2000s.

Personnel is one area that has seen a sizable impact. If current downsizing plans remain intact, the ground forces will drop to 632,000 in coming years, the smallest figure in almost seven decades.

But with the balance of power about to shift in Washington, there is a growing sense of optimism that President-elect Donald Trump will deliver on his campaign promises to substantially reinvest in America’s armed forces.

Wood said the service branches don’t have enough troops or training. “If you have a small force, and you had to go do something, that force has to be able to do that,” he said. If more funding is made available, “tactical competency is the first order of business.”

“You could use a lot more people in the armed forces,” he said. “At the same time, if you do that, you’re going to use up the funds that you need for modernization. … You’ve got that tremendous trade-off.”

Conrad Crane, a professor at the United States Army War College, explained why modernization was so important.

“The military has developed these new design processes to identify problems that are better to deal with the complexity of modern warfare,” he said. “You always want to have a certain amount of excess capacity. We definitely don’t have any excess capacity.”

“We’ve had much less levels of spending than, as this report shows, we need,” said Turner, who is chairman of the House Armed Services Tactical Air and Land Forces Subcommittee and a member of the House Intelligence Committee. “President [Barack] Obama is handing the next president a military that is much less capable than the military he was handed in a world that is much less safe.”

The report calls Russia the primary threat to American interests, followed by Iran, China and terrorist groups such as the Islamic State and Hezbollah. The threat posed by North Korea was downgraded, from “hostile” to merely “aggressive.”

On the campaign trail, Trump called repeatedly for improving U.S.-Russia relations. Many of his fellow Republicans, including Sen. John McCain, the powerful head of the Senate Armed Services Committee, have denounced the idea.