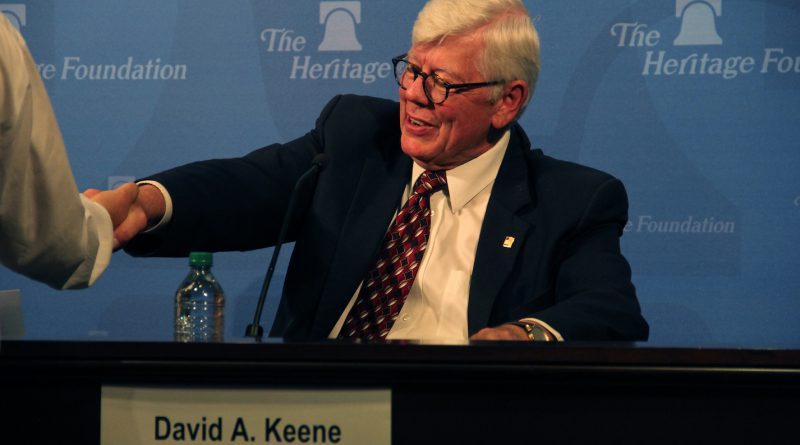 WASHINGTON – Gun rights has not been the most critical issue in the  presidential campaign, but former National Rifle Association president David Keene reminded an audience Wednesday that because the next president will fill the vacant Supreme Court seat, Americans’ Second Amendment rights may be in jeopardy.

Keene, who led the NRA from 2011 to 2013 and now is the opinion editor at The Washington Times, was promoting a new book at the conservative Heritage Foundation when he warned the audience of the likelihood of a liberal-leaning Supreme Court overturning a previous high court ruling that gun use for personal protection is constitutional.

Keene said he is skeptical of Democratic presidential nominee Hillary Clinton’s stance on guns, expressing his concern for the future of gun rights under her administration.

“When you’re dealing with Clintons, you have to parse every word they say,” he said. “At the end of the day, if you control the courts, the Second Amendment doesn’t mean very much.”

Instead, Keene said, voters concerned with the future of gun rights will vote for Republican presidential nominee Donald Trump.

“He hasn’t always been, in the past, clear on these issues, but as I told a senator who voted against us once, the one thing you need to know is we believe in redemption,” Keene said. “The NRA endorsed Donald Trump early because of the list of people he put out as potential nominees to the Supreme Court.”

Along with that endorsement, the NRA has spent nearly $13 million in support of Trump and in opposition to Clinton through independent expenditures, communication costs and coordinated expenses, according to the Center for Responsive Politics.

Keene said laws allowing gun owners to carry their weapons wherever they are have been proven successful in reducing crime.

“In every state that has adopted concealed carry (legislation), the violent gun crime has decreased instead of increased because people are rational,” he said.

Everytown for Gun Safety, a gun control advocacy group that endorsed Clinton, has published research showing the positive effects of taking guns off the streets.

“Strong gun laws matter, within and beyond city borders,” the group said in a report. “Over the last decade, nearly 80 percent of America’s 25 largest cities experienced significant declines in gun violence. Strong laws and enforcement, interventions to reduce the supply of illegal guns, and efforts to disrupt gangs and turn their members away from violence all played a part.”

For Keene, however, such interventions infringe upon the right of citizens to have guns for personal protection.

His book, “Shall Not Be Infringed: The New Assaults on Your Second Amendment,” was released Tuesday.