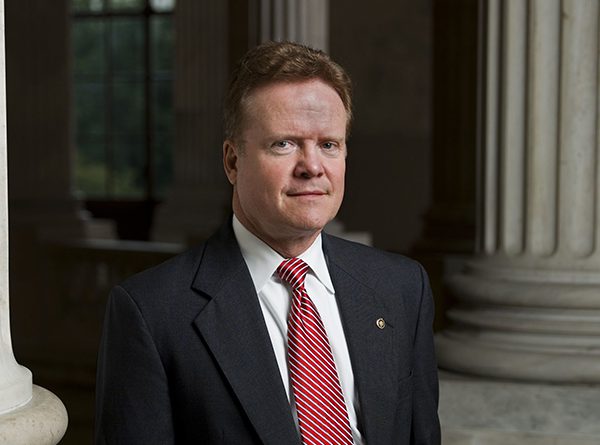 Jim Webb served as a U.S. Senator from Virginia from 2006 to 2012 and was secretary of the navy during the Reagan administration. (Photo by United States Senate via Wikimedia Commons)
International Relations
By Will Racke on November 28, 2016 foreign policy, Jim Webb, national security, NATO
Tweet

A Democrat was the most popular speaker at a foreign policy conference hosted last Tuesday in Washington by a conservative opinion magazine.

Jim Webb, the former U.S. senator, secretary of the Navy and briefly a candidate in the Democratic presidential primary, delivered the keynote address at The American Conservative’s Nov. 15 symposium, where his outsider sensibility and skepticism of U.S. military intervention abroad found warm welcome among the foreign policy scholars and writers in attendance.

They believe that their perspective has been marginalized by the Washington foreign policy elite since the end of the Cold War. At the dawn of President-elect Donald Trump’s administration, organizations like The American Conservative are cautiously optimistic that non-interventionist foreign policy realism can make a comeback.

Although much of the event’s intellectual horsepower was provided by academics, including Boston University historian and bestselling author Andrew Bacevich and Texas A&M University professor Christopher Layne, The American Conservative columnist Bill Kauffman made clear in his introduction that Webb was the main attraction.

Kauffman called on Trump to nominate Webb for secretary of defense, a proposition that received the most enthusiastic applause of the entire conference. However, Trump has indicated retired Marine Corps Gen. James Mattis is a top contender for that job.

“We’re now facing four years or more where we’re going to be divided,” he said, but in terms of foreign policy, “we have the opportunity to reshape our position.”

Webb is wary of any further expansion of NATO, which he thinks has grown beyond its original purpose and is now a strategic liability because many of the newer members are “clearly protectorates rather than allies.” His take on military engagement in the Middle East is similarly straightforward: no more wars for regime change. After 15 years, he said, “the historical record is unfortunate, but clear.”

Military retrenchment isn’t Webb’s only strategic prescription, though. He advocates a robust U.S. naval presence in the South China Sea and the crucial international shipping lanes of the region. America is the only country that can provide a counterbalance to China as it seeks to expand its sphere of influence, Webb said.

In keeping with his experience as a decorated Marine Corps infantry officer, Webb spoke about diplomacy, defense policy, and America’s role in the world. But his world view is also shaped by his term as a U.S. senator from Virginia and a private career as a journalist and author of several books, most notably “Born Fighting,” a popular history of the Scots-Irish in America.

Webb is a descendant of Scots-Irish settlers, and his ethnic cohort throughout the Appalachian Highlands and the industrial Midwest makes up much of the white working class that contributed to one of the biggest electoral upsets in U.S. history.

Webb praised their populist revolt against the “hard-wired” elite in American media, political and business institutions.

“Who were the so-called deplorable people who put Donald Trump in the White House?” Webb asked, referring to Hillary Clinton’s characterizion of Trump’s voter base. They are the workers ignored by politicians and who have rejected the elitism that has proliferated in American life since the Vietnam War, he said.

Although the self-described Reagan Democrat refused to reveal which candidate he voted for, Webb saluted Trump for the “tenacity and uniqueness” of his campaign and for reaching out to a group of voters the Democratic Party had turned into its “most convenient whipping post.”

Webb said the same interlocking political elites that abandoned the white working class have enabled the foreign policy mistakes of the last two decades, pointing to the invasion of Iraq, the intervention in Libya, and various other U.S. military entanglements in the Middle East.