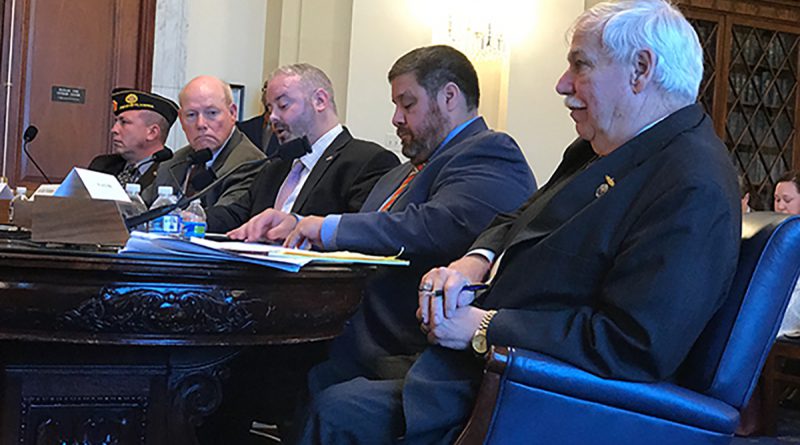 John Wells (R), executive director of Military Veterans Advocacy, listens to other veteran advocates during hearings, Wednesday, to introduce new bills to improve services at the VA. There is growing concern among veterans that the VA will continue to oppose plans to extend services to Veterans who were part of the “blue water navy.” (Duke Omara/Medill News Service)
Domestic Politics
By Duke Omara on April 5, 2017April 6, 2017 benefits, Omara, VA, Veterans
Tweet
WASHINGTON — The Department of Veterans Affairs opposes a bill that would extend disability benefits to Navy veterans from the Vietnam War who served at sea and claim they were exposed to Agent Orange because the evidence of exposure is uncertain and the cost could reach nearly $1 billion, a top VA official said Wednesday.
The measure, proposed by Rep. David Valadao, R-Calif., would “extend the presumption of Agent Orange exposure to all veterans who served on ships in the ‘territorial seas’ of the Republic of Vietnam.” Veterans advocacy groups say that deployment on ships during the Vietnam War is enough to warrant a lower threshold to qualify for service-related disability benefits.
“There is continued scientific uncertainty surrounding the issue of blue water Navy veterans’ exposure to Agent Orange,” Beth Murphy, VA director of compensation service at the VA, told the House Subcommittee on Disability Assistance and Memorial Affairs. Blue water Navy refers to sailors who serve on traditional sea-going vessels, while brown water Navy is often used to refer to Navy units that conduct riverine patrols away from the sea.
Murphy said the National Institute of Medicine (since renamed the National Academy of Medicine) had “reviewed all available scientific evidence” and concluded in part that they were “unable to state with certainty that blue water Navy personnel were or were not exposed to Agent Orange.”
Murphy also told the House subcommittee that the VA would not support the bill in its current form because it doesn’t clearly define what constituted “the territorial seas of the Republic of Vietnam.”
Without that, Murphy said, the agency “could not determine which veterans are eligible to receive benefits under the expanded presumption based on their military service.”
Murphy’s testimony noted that “a new study of Vietnam veterans, which includes the collection of data on blue water Navy veterans, is currently ongoing, with early results expected to be available by December.”
She added that the agency was also concerned that the retroactive award date for benefits went as back as 1985 and that those settlements would amount to at least $967 million by next year.
But John Wells, executive director of Military Veterans Advocacy, accused the VA of “cherry picking” scientific evidence to defeat the bill.
“They only provide what they want to provide. The very next sentence after the one they quote (from NIM) basically says there is no more or less evidence to support the exclusion of the blue water Navy than there is for the Army or the brown water Navy,” Wells said. “That is why we need the presumption.”
Wells said the VA could have settled the matter by conducting required medical tests on affected Navy personnel, which would have put the issue to rest as far back as 1991.
Many veterans at the hearing criticized the VA for what they said is a strategy of “delay, deny, until they die.”
Rick Weidman, Vietnam Veterans of America executive director for policy and government affairs, agreed with Wells that the VA was using information from the NIM study selectively while ignoring findings that contradicted its position.
“If you ask for a panel from the only recognized national body that is independent of the government and then you disregard it, then that makes it absurd. Why the hell did you go through this charade?” he asked.
The refusal to grant the benefits is creating a sharp wedge between the advocacy groups and the VA at a time when the Trump administration is seeking to fulfill its campaign promises of reforming the VA’s bureaucracy to speed delivery of services.
The “VA decided to do what they thought was the most economical thing to do and not necessarily the most problematic. Its more about money than it is about anything else,” said Chris Slawinski, a former president of the Fleet Reserve Association, which advocates for enlisted sailors.
Follow @NatSecZone