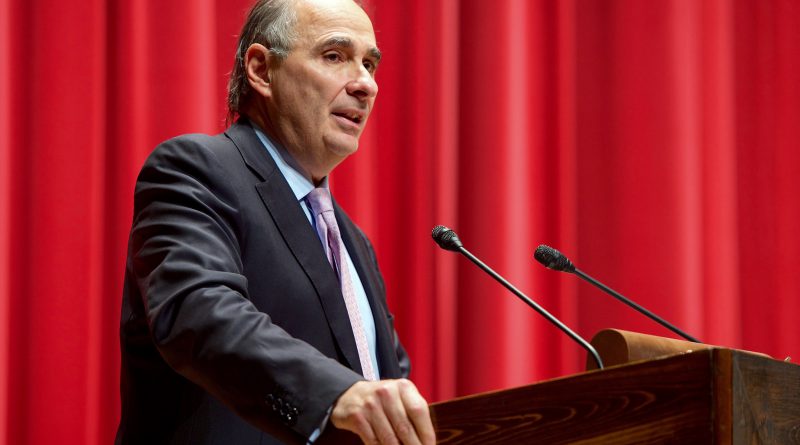 Axelrod delivers a speech at the University of Chicago in Chicago, on Oct. 26, 2016. (Photo Credit: US Department of State)
Announcements
By Storer Rowley on August 1, 2018August 2, 2018 announcements, Medill students, national security
Tweet

CHICAGO – Students from the Medill School of Journalism’s Politics and National Security Journalism initiative met July 20 with national political consultant David Axelrod, former chief strategist and senior adviser to President Barack Obama, and learned immediately of his respect for both journalism and politics.

“We need you out there,” Axelrod, a former journalist, told the students in a wide-ranging conversation about politics, elections, the state of American democracy and recent attacks on the media. “This is why journalism is so important. It’s why the Founding Fathers enshrined freedom of the press in the 1st Amendment of the Constitution. You need to have a really firm belief in the mission.”

Lucas Robinson, a Medill MSJ student in the group, said later that meeting Axelrod “was, obviously, a great honor.”

At the meeting, students asked questions about the national political scene, prospective presidential candidates, foreign policy, the impact of the Trump administration on the national discourse, domestic policy and democracy.

Axelrod devoted 90 minutes to answering questions. However, he started off the conversation with journalism, noting that his career began as a reporter with the Hyde Park Herald and then he worked as a political writer and columnist with the Chicago Tribune—before he moved into political consulting.

“I had a foot in both worlds,” he told the students. “I revere journalism. And you’re not there to be a stenographer. You have to report and interpret the news as you see it, and objectively. Covering Donald Trump, if you’re objective, it can seem partisan because his behavior is so out of the norm.

“But what we have seen in the last two years is actually why journalism is so important now,” he added. “I only wish I were starting out now as a young reporter. It’s such a vital time. We’re witnessing the complete collapse of local journalism in some places, and we need that bright light that shines in local areas and corners.”

Axelrod listed a few of the candidates he is watching as possible Democratic challengers to the president in the 2020 election, including former Vice President Joe Biden, Sens. Kamala Harris of California and Cory Booker of New Jersey, former Gov. Deval Patrick of Massachusetts, Los Angeles Mayor Eric Garcetti and former New Orleans Mayor Mitch Landrieu, among others.

Axelrod talked about the qualities that make a good presidential candidate and a good president, singling out the need for “authenticity” and “big ideas.” He noted that despite the political turmoil of the current times, including the mid-term elections this year, “I think we need to be hopeful about the future.”

A University of Chicago alumnus, Axelrod currently serves as director of the University of Chicago’s non-partisan Institute of Politics; senior political commentator for CNN; and host of The Axe Files, a top-rated podcast jointly produced by CNN and his institute. As a media strategist, he has worked for 150 state, local and national political campaigns, and he is also the author of The New York Times best-selling memoir, Believer: My Forty Years in Politics.